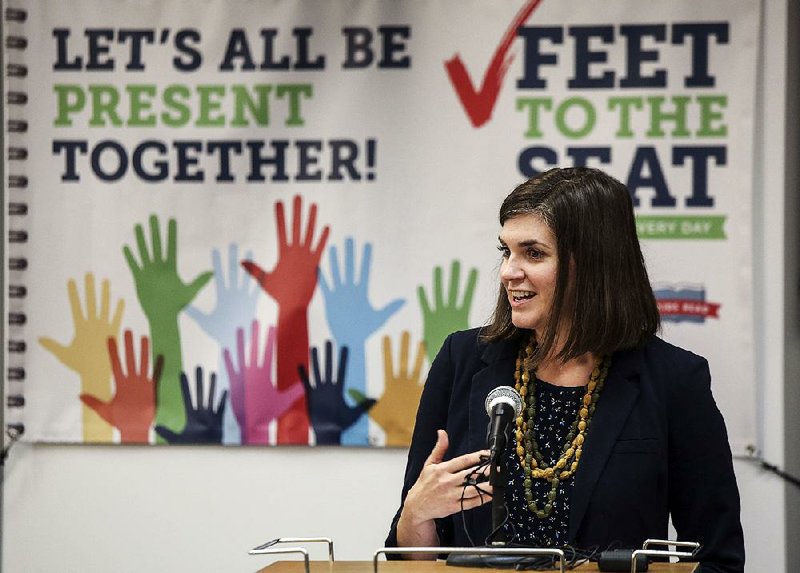 Mollie Palmer, director of marketing and communications for the Heart of Arkansas United Way, speaks Thursday at Terry Elementary School to announce the Feet to the Seat Campaign, which aims to address chronic absenteeism in the Little Rock School District.

"Be at school. Be on time. Every day counts."

Little Rock School District schools, working in conjunction with local and national partners, are sending that and other similar messages to students and parents this month via message boards in front of schools, school open houses, social media and upcoming Sept. 22 community walks.

Superintendent Mike Poore is promoting the campaign that is districtwide but will specifically home in on 20 schools with significant needs to eliminate chronic student absenteeism, which is defined as missing 10 percent or more days in the 178-day school year. In a nine-month school year that can be about two absences a month.

"I love the phrase 'Feet to the Seat,'" Poore said about the good-attendance campaign at an event at Terry Elementary School, "because that is what we want -- we want young people in the room to work with each other and to work with our teachers."

The Campaign for Grade Level Reading, ArKids Read, Heart of Arkansas United Way and Optimist Club of Greater Little Rock are partnering in the drive to reduce school absences, tardies and early student checkouts. The Optimist Club granted $30,000 to the United Way for the messaging campaign.

"It will make a difference. I know it will," Poore said about the campaign's potential impact. "One of the easiest things we can do to improve academic achievement is through this campaign." 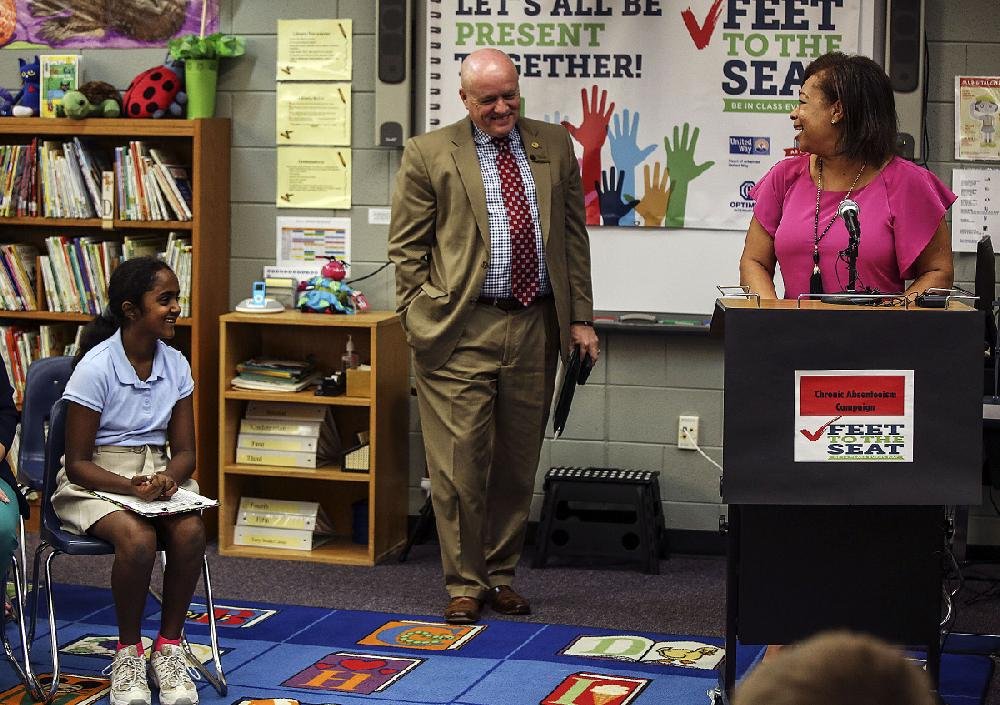 The chronic absenteeism rates at the 20 targeted Little Rock schools were as high as 52 percent of the entire student body in the previous 2017-18 school year. A total of 451 of the 865 students at J.A. Fair were chronically absent last school year, as were 601 of the 1,216 students at Hall High and 402 of the 834 students at McClellan High.

Forty-two percent of the 661 pupils at Henderson Middle missed 10 percent or more of the school days last year as did 36 percent of the 667 pupils at Cloverdale Middle. At Romine Elementary, 28 percent of the 267 pupils missed at least 17 or 18 days last school year, according to data provided by Ericka McCarroll, the district's elementary education and response to intervention director.

A recent national report prepared by Attendance Works, in cooperation with the Everyone Graduates Center at Johns Hopkins University and the Hamilton Project at the Brookings Institution, reports that 15 percent or nearly 8 million of the nation's students were chronically absent in 2015-16. That is the most recent year for which national, state, district and school data have been collected by the federal Office for Civil Rights.

The Office of Civil Rights considers 15 absences per school year as the threshold for chronic absenteeism.

In Arkansas, 14.1 percent of students met the 15 absences threshhold in 2015-16, according to The Hamilton Project's interactive map: https://bit.ly/2wXXtxv.

The Little Rock School District's percentage of students with 15 or more absences was 18.6 in 2015-16, according to the Hamilton Project. Elsewhere, Pulaski County Special reported 24.8 percent chronic absenteeism that year. Springdale's rate was 9.3 percent. Fayetteville's was 9.8 percent; Bentonville's was 15.4 percent; Jonesboro's was 22.3 percent. Texarkana's was 12.2 percent and West Memphis's rate was 15.8 percent. Pine Bluff 's rate was listed as not available.

Hedy N. Chang, one of the authors of the Data Matters; Using Chronic Absence to Accelerate Action for Student Success, said in a recent teleconference with reporters that the number of chronically absent students increased by about 500,000 between 2013-14 and 2015-16 but that that is attributed to more accurate reporting of information to the Office of Civil Rights by school districts.

"The reason we want to look at attendance is because we know it is so strongly associated with academic success," said Chang who is also executive director of the Attendance Works initiative to promote policies around school attendance.

"We now have data showing that when students are chronically absent in prekindergarten and kindergarten, they are much less likely to be reading at grade level by the end of third grade. By the time you are in middle school, chronic absence predicts not passing your courses and by the time you are in high school, chronic absence predicts whether or not you are going to graduate or drop out."

Even those who are chronically absent but graduate are reported as not likely to persist in college, she said.

Regular absences are an alert that students may need additional support and an investment of resources to have the opportunity to learn and thrive, Chang said. Barriers to good attendance include illness, trauma, unreliable transportation, negative school experiences such as bullying, lack of engagement and relevance to a child, poor discipline that pushes kids out and family failure to realize importance of school attendance.

Collecting data electronically and actually acting on that data to reduce student absences are relatively new metrics in the country but that has changed in large part because of the federal Every Student Succeeds Act of 2015.

Chronic absenteeism is now required to be reported by states on school report cards by later this year.

Thirty-six states, including Arkansas, and Washington, D.C., have taken the next step of including the measure in their school accountability formulas. In Arkansas, those formulas result in the application of A-to-F letter grades for schools.

Chang said she hopes that schools, districts and states will use the data on absenteeism not as a basis for legal penalties against families and students but as a basis for problem-solving and understanding what students need to fully access the instructional program available to them.

McCarroll of the Little Rock district said that the local attendance campaign will go beyond banners and Sunday night phone calls to parents to also include professional development teams that will work with schools on how to use the data to identify the needs and plan accordingly.

At Terry, Principal Stephanie Franklin began last school year to communicate with families about good school attendance and offer incentives to students, such as lunch on the patio with the principal.

Sreehitha Bollimpalli, a fifth-grader at Terry Elementary, said she is inspired to attend school by "amazing teachers and staff." And even though her braces require regular visits to an orthodontist, those appointments are made at times other than school hours, she said.

"I made it to the No Tardy Dance Parties," Sreehitha said.