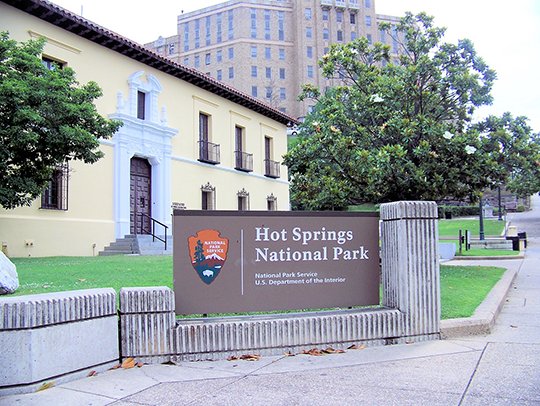 Submitted photo ARKANSAS NATIONAL PARKS: The Hot Springs National Park Headquarters building at 100 Reserve St. was created as the first federal reservation by a Congressional Act in 1832, the land around Hot Springs' thermal springs was renamed a national park in 1921.

Later this month, members of the House Natural Resources Committee will travel to the city and hear about its recent renaissance.

Republican U.S. Rep. Bruce Westerman said he wants his colleagues to witness a successful public-private partnership that has revitalized his hometown.

Committee Chairman Rob Bishop, R-Utah, will convene the field hearing Sept. 17 at Hot Springs City Hall. Westerman, who serves on the committee, is inviting other lawmakers to join them.

Hot Springs was, until recently, the nation's smallest national park. It's also one of the oldest.

In 1832, President Andrew Jackson signed a law designed to protect the springs and the land surrounding it. Originally known as the Hot Springs Reservation, it became Hot Springs National Park in 1921.

For decades, Hot Springs was the state's premier resort destination. The sick came to soak in its geothermal waters. Hollywood celebrities, sports stars and gangsters also flocked to the site.

But over the years, the town lost its luster and the federal properties deteriorated.

Eventually, nearly all the bathhouses were shuttered.

In 2003, the National Trust for Historic Preservation placed Bathhouse Row on its annual list of America's 11 Most Endangered Historic Places.

For a while, portions of Central Avenue were pretty grim, according to Cole McCaskill, vice president of economic development with the Hot Springs Metro Partnership.

"Folks around here can remember that time when the federal side of the street was dark and closed up," he said.

That changed after the National Park Service began partnering with businesses, McCaskill added.

"It's been a very successful program, a way that the public and the private sector can work together," he said. "Six of the eight bathhouses along Bathhouse Row have been leased and several of those businesses are doing some really world-class things and getting a lot of national attention."

There's Bathhouse Brewery, for one.

"It's the only brewery that makes thermal beer in the world with thermal water. They've been featured nationally and internationally," McCaskill said.

Then there's Hotel Hale, a bathhouse that is being transformed into a boutique lodging facility.

Bathhouse Row is no longer on the endangered list.

Westerman said the public-private efforts have been great for the Hot Springs economy.

"You can't really put a value on how much additional revenue that's brought into the city through tourism by having those bathhouses functioning," he said.

The arrangement is also good for the government. Instead of being a burden, the buildings can be a revenue generator, he said.

It's money the National Park Service could use, Westerman said.