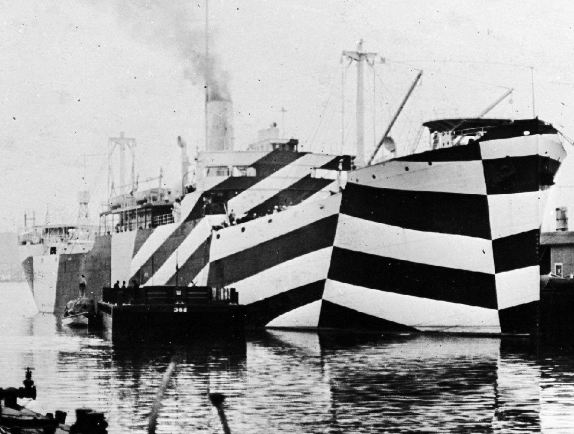 Built in a hurry in 1918 and camouflaged with a baffle scheme, the U.S.S. Mahomet was delivered to the Navy two days after Armistice Day.

The news was full of massive military matters in the second week of September 100 years ago, with battles bearing still familiar names and daily casualty reports covering a horrifying amount of newsprint with names in teeny tiny type.

World War I had only two months left. So you might imagine Old News would be rolling in those big stories, on its back, wiggling all four feet in the air. Easy column, right? But not so much.

Military history is an honorable study requiring years of dedicated assimilation of details. Helpful Reader, who cares about World War I deeply and has since childhood, knows it all already. Helpful Reader knows the various thread counts of the various caps worn by the Doughboys. Helpful Reader has a telephone and is not afraid to use it.

So call me chicken, but instead of the Allies shoving the Germans back across the Hindenburg Line, let's talk about odd little things, beginning with an unfamiliar word from the Sept. 12, 1918, Arkansas Gazette: camoufleurs.

While it is a war word, it is also an art word.

In February 1918, a corps of camoufleurs was established within the division of steel ship construction in the U.S. Shipping Board Emergency Fleet Corp. at Philadelphia under the management of one Henry C. Grover.

Under him is a corps of camoufleurs, men trained to the work who are thoroughly instructed in the baffle system and equipped with a variety of designs to meet all sorts of vessels.

The organization now comprises more than 100 camoufleurs who have been personally appointed for their fitness by Mr. Grover himself. Among this remarkable class of war workers are a number of artists of national repute.

What they did was paint model ships.

They used these models to design bold geometric patterns that were then transferred to the hulls and decks of vessels flying the U.S. flag, including our Navy. Camoufleurs tarted up our ships like floating zebras.

The article explains that camouflage was "an imported article." I've read elsewhere that it originated in France, but the report talks about Great Britain. After three years of wartime experience with blurring Her Majesty's ships in paint schemes intended to render them invisible against sea and sky, British experts concluded that was impossible. Combined with visual observation, a German submarine's hydrophone (underwater microphone) was simply too good at spotting the ships. German captains could discern their class, whether they were alone and which way they were headed.

But one form of paint design -- baffle schemes -- confused the subs. Invented by Norman Wilkinson, a lieutenant commander in the royal navy, baffle schemes were highly contrasting color blocks, bold geometries that obscured a ship's actual outlines and bulk.

The idea is to totally mislead the submarine when once his "prey" has been sighted.

The article didn't name the famous artists engaged in what came to be known as "razzle dazzle" designing, but they did include some expressionists, cubists and surrealists well known today, such as Paul Klee, as well as a few zoologists.

The battlefield research done in World War I carried over for World War II. Historians specializing in the history of camouflage have created some well-illustrated accounts that we can admire online. I especially like the photo of artists painting zigzags on little models near a desk bearing a fleet of model ships.

Nobody knew how soon the war would be over. A century ago today, the Gazette reported that one Sam L. Billingsley of Palestine had cut off his pinky finger so he could join the Marines at Memphis.

"What can I do to get in," asked Billingsley when he was rejected here just before the Marine recruiting depots were ordered closed.

"Have that little finger amputated," the sergeant told him.

"Well I'll go home and think it over," he replied.

In September, the postmaster at Palestine wrote to the Marines testifying that Billingsley had amputated his deformed pinky. Word came back that his would be the first paperwork processed when the depots reopened.

That's the last mention I find of him in the archives. But I did find traces elsewhere online of one Samuel Leslie Billingsley (1899-1958) who was born in St. Francis County. If that's our Sam, his sacrifice didn't go to waste. He served as a petty officer second class in the U.S. Navy during World War II and is buried in Barrancas National Cemetery at Pensacola, Fla.

On Sept. 10, 1918, more than 125 businessmen and professionals from Hot Springs shoveled gravel from a pit in the Saline River and spread it over the Little Rock-Hot Springs Highway.

More than 500 loads of gravel were spread on the road by these volunteers.

All Set for the Big Wolf Drive

Meanwhile, at Glenwood, every train disgorged more hunting hounds as the Big Wolf Drive of 1918 set up camp along the Caddo River. According to advances in the Arkansas Democrat and Gazette, 200 hounds were expected for a five-day, five-county meet, along with 3,000 or 5,000 hunters and crews from big famous moviemakers.

Only wolves and foxes were to be killed, and other fur-bearing animals "molested as little as possible."

What actually transpired is unclear, reports having been drawn from an aquifer of hyperbole underlying certain parts of Montgomery County. Purported official attendees were not in attendance, for instance. Gazette reports set the slaughter at eight opossums, two dogs, three wildcats and either 21 or 11 wolves.

After the facts, whatever they were, the Democrat reported a dispute between state game wardens over the propriety and the existence of the event.

Certainly the hunters were boisterous:

The feature of the day, however, was the barbecue late this afternoon, when several humorous and patriotic addresses were made, following a course of barbecued beef and pork and roasted wolf heads. 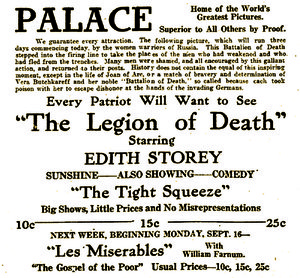 100 years ago this week, the Palace Theater in Little Rock was showing The Legion of Death, a movie about female Russian warriors who carried poison to save them from dishonor in the event they were captured by Germans.