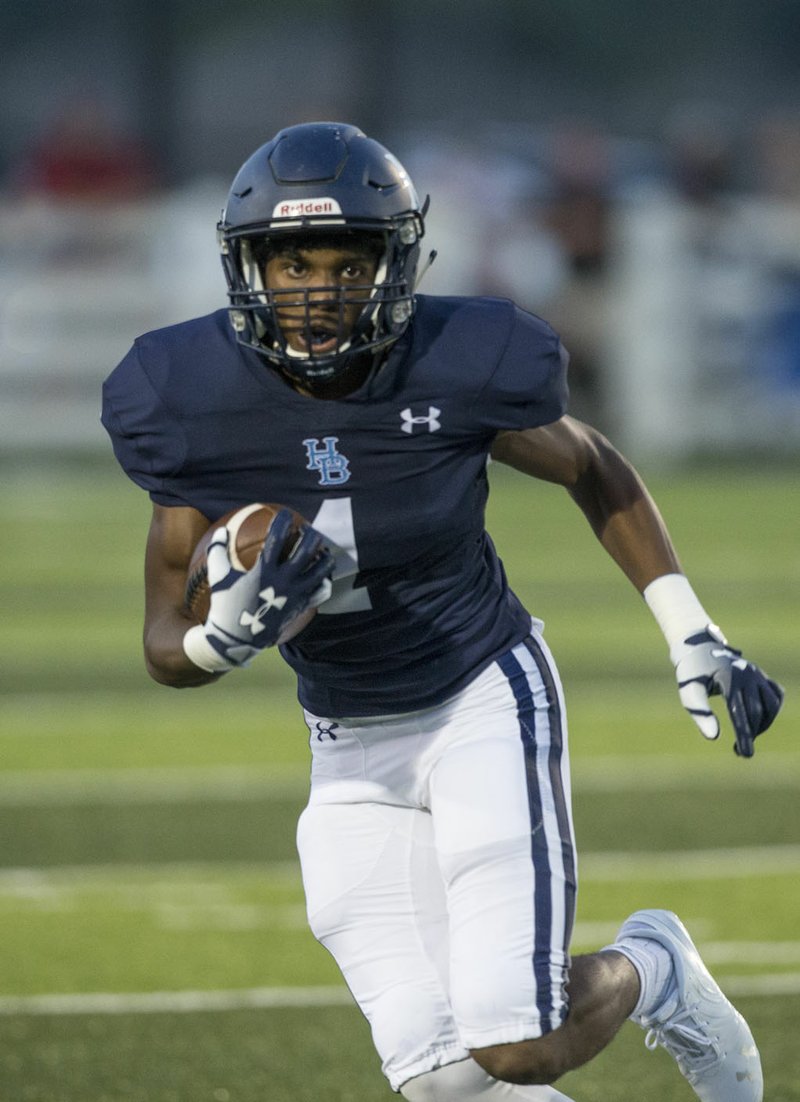 NWA Democrat-Gazette/BEN GOFF @NWABENGOFF Micah Seawood, Springdale Har-Ber wide receiver, runs for extra yards Friday, Aug. 24, 2018, during the game against Pulaski Academy at Wildcat Stadium in Springdale. The Wildcats will be on the road tonight at Pine Bluff in their final nonconference game of the season.

BETWEEN THE LINES: ... Bryant beat Fayetteville twice last year, 38-37 in overtime in Week 2 and 21-20 in the quarterfinals of the Class 7A state playoffs. ... Senior quarterback Darius Bowers has thrown for 776 yards and 7 touchdowns without an interception in two games. ... Receivers Connor Flannigan and Beau Stuckey have combined for over 600 yards and seven touchdowns. ... Bryant is home tonight after playing in Little Rock against Benton and in Bentonville against the West High Wolverines. ... Latavion Scott rushed for 157 yards in the win over Bentonville West and for 110 yards and two scores in the win over Benton. .... Bryant went 10-2 last season while Fayetteville finished 7-5. .... Scott rushed for over 1,300 yards while quarterback Ren Hefley passed for over 1,800 yards last season despite missing games because of a broken collarbone.

HOOTEN'S RANKINGS Fayetteville is No. 3 in Class 7A. Bryant is No. 2.

BETWEEN THE LINES The Mounties' game at Little Rock Central last week was stopped because of lightning and ultimately canceled. ... Rogers junior Sammie Zamarron rushed for 110 yards in the Mounties' opening-game loss to Pulaski Robinson. ... The Patriots missed on a potential game-winning 2-point conversion in the waning minutes and lost 21-20 at Class 6A Marion. ... The two teams have never played each other. ... Parkview coach Brad Bolding also coached at Rogers earlier in his career.

BETWEEN THE LINES Heritage was off last week, after losing to Little Rock Central. ... The Mavericks lost 52-37 to 6A Greenwood, after beginning the season with a win over Bentonville West. ... Southside was limited to just 112 yards rushing by the Bulldogs last week. ... Mavericks QB Taye Gatewood threw for 210 yards and accounted for three of their four TDs. ... Heritage quarterback Zac Brown has rushed for 92 yards, threw for 216 against Little Rock Central and accounted for two TDs.

HOOTEN'S RANKINGS Fort Smith Southside is No. 9 in Class 7A. Rogers Heritage is No. 16.

ON THE AIR The game is live-streamed; search Siloam Springs High School Athletics on YouTube.

BETWEEN THE LINES Siloam Springs and Van Buren meet for the seventh straight season with each team having won three in the series. ... Siloam Springs defeated Van Buren 35-21 at Panther Stadium last year. ... The Panthers lost their home opener last week against Harrison 42-7. ... Siloam Springs was held to less than 200 yards of offense in the loss to the Goblins. ... Senior running back Kaiden Thrailkill rushed for 147 yards and one touchdown against Harrison and has 47 carries for 270 yards and four touchdowns in two games. ... The Panthers were held to just 6 of 19 passing for 40 yards in the loss to Harrison. ... Van Buren is coming off a 46-21 loss to Fort Smith Northside in a game that was close for most of the second half. ... The Pointers, under new head coach and former Razorback quarterback Casey Dick, smashed Alma 48-33 in the opening game of the season. ... It was Van Buren's first win over Alma since 2010. ... Van Buren quarterback Christian Morrow has completed 39 of 59 passes for 398 yards, three touchdowns and one interception. ... The Pointers have gotten good production from four of their receivers led by Judd Bartholomew who leads with 10 catches for 147 yards. ... Brayden Rivas has 12 catches for 113, while Logan Humphries has seven catches for 97 yards and Gary Phillips nine catches for 74 yards.

ON THE AIR The game is live-streamed on the Springdale Public Schools website.

BETWEEN THE LINES Har-Ber rebounded from a 50-14 loss in the opener to Pulaski Academy by running over Russellville 27-7. ... Pine Bluff's game against Watson Chapel last week was halted at halftime because of lightning and deemed a 14-14 tie. ... Har-Ber junior quarterback Blaise Wittschen suffered a concussion last week against Russellville and will not play tonight. Sophomore Noah Livingston is expected to play quarterback for the Wildcats tonight. ... Har-Ber junior running back Max Pena had a breakout game last week with 160 yards and three touchdowns. ... Pine Bluff junior quarterback Tyler Foote leads the Zebras' offense. Last week against Watson Chapel, Foote connected with Berkarion Black on a 14-yard slant for a touchdown. ... Kemariea Wilkins leads Pine Bluff's ground attack.

BETWEEN THE LINES Russellville could not contain Springdale Har-Ber's punishing ground game in a 27-7 loss last week. ... Alma struggled on both sides of the ball in a 37-7 loss to Springdale High. The Airedales trailed 9-7 at halftime. ... The Cyclones did not score an offensive touchdown against Har-Ber. ... Alma was effective using two quarterbacks in Tanner Shelton and Landon Blair, but could not establish a consistent run game against Springdale, which enabled the Bulldogs to dominate the second half. ... For the first time since 2007 Alma is 0-2 to start the season. ... Grayson Bailey is a playmaker for the Airedales in both the passing game and on special teams. His long punt return last week against Springdale was a key in Alma's only scoring drive. ... Cyclones' quarterback Rhett Adkins is 18-of-43 for 269 yards with one touchdown.

ON THE AIR The game is live-streamed at greenwooddogpound.com.

BETWEEN THE LINES Greenwood ran over Fort Smith Southside 52-27. ... The Sandites rebounded from an opening loss to Mansfield (Texas) Summit by crushing Putnam City 45-24. ... Page quarterback Caden Pennington fired three touchdown passes in the win against Putnam City. The Sandites built a 35-point lead in the game and cruised from there. ... Page running back Joel Mackey, a two-way starter, racked up 150 yards and scored one touchdown. ... Greenwood senior quarterback Peyton Holt, in his second career start, torched Southside for 482 yards of total offense and four touchdowns. ... Both Treyton Dawson and Luke Leonard had double-digit receptions for the Bulldogs and both were over 100 yards receiving.

HOOTEN'S RANKINGS Greenwood is No. 1 in Class 6A.

ON THE AIR Farmington -- game will be aired on pgtelco.com. Pea Ridge -- the live stream can be seen on Esenetworks.com.

BETWEEN THE LINES Since 2004, Farmington leads the series by a 6-4 margin, but Pea Ridge has won the last four meetings, including 24-7 last year at Farmington. ... The Cardinals seek their first 3-0 start since 2014, when they defeated Prairie Grove, Huntsville and Van Buren in nonconference play. ... Farmington QB Eric Hill has completed 10 of 16 passes for 150 yards and three touchdowns, while RB Reid Turner leads the Cardinals with 32 carries for 175 yards and 3 scores. MLB Colton Kilgore has 21 tackles through two games, including four tackles for loss. ... Pea Ridge will try to avoid going winless through nonconference play for the first time since 2008, when the Blackhawks finished 1-9. ... QB Tate Busey has completed 16 of 42 passes for 247 yards and two TDs while running for two scores vs. Maumelle, while RB Samuel Beard has 116 yards and a touchdown on 21 carries. ... SS Carson Rhine has a team-high 22 tackles, including one for loss through two games.

ON THE AIR Huntsville -- None. Elkins --the live stream can be found at www.elkinselks.com/broadcasts.

BETWEEN THE LINES It's the first game on Elkins' new field, which was totally redone during the summer with an artificial surface. The field now goes north-south instead of east-west. ... This is the 13th consecutive meeting between the two schools. Huntsville has a 7-5 advantage during that time, but Elkins has won the last two meetings, including a 38-33 decision last year. ... Both schools moved up in classification this year as Huntsville is Class 5A while Elkins is Class 4A. ... Huntsville QB Sean McCone has completed 30 of 51 passes for 355 yards and three touchdowns, and he's run for 110 yards and two scores. .... His counterpart, Elkins QB Quinn McClain has completed 28 of 45 passes for 404 yards and seven touchdowns, and he has ran for 179 yards and a pair of scores.

BETWEEN THE LINES Since 2002, Greenland owns a 6-2 series advantage, including a wild 76-71 victory last year in one of the highest scoring high school football games in state history. ... Pirates QB Levi Vaughn has accounted for six TDs in two games, having thrown two TD passes and run for four TDs. ... RB Jett Dennis has run for 150 yards and three TDs, then caught a TD pass. ... WR Zaylen Bryant has 11 of Greenland's 25 pass receptions through two games. ... CB Zach Gilbert leads the Pirates defense with 21 tackles, followed closely by OLB Corby Wright with 20. ... Gentry, which is playing its home opener, will try to avoid its first 0-3 start since 2014, when the Pioneers went 3-8. ... QB Brandon Atwood has compiled 276 yards on 33 of 56 passing with one TD, and he has accounted for 166 of Gentry's 219 yards rushing through two games. ... RB Peyton Wright has a team-high 14 receptions for 78 yards. ... Garrett Hays, who splits time between linebacker and the defensive line, had 13 tackles against Huntsville and leads the team with 17. ... DB Zack Jarnagan had an 85-yard punt return for a touchdown vs. Huntsville and is tied for second on the team with 11 tackles.

BETWEEN THE LINES Ozark QB Dawson Dietz showed off his dual-threat skills, rushing for 117 yards on just six carries with two TDs and also threw for 72 yards and another score in the Hillbillies' big win over Clarksville. ... Sophomore Tyler Sanders also enjoyed a huge night rushing for 198 yards and 3 TDs against Clarksville as Ozark bounced back from a loss to Class 3A Booneville. ... The Tigers finished their loss to Dardanelle with four two-way starters sidelined by injuries, but only WR/LB Dean Lea will miss Friday's game. ... Tigers QB Brayden Caudle has thrown for 585 yards and 5 TDs through two games, but Charleston has only rushed for 133 yards total as a team. ... Juniors Geoffrey Scott and Isaac Nason lead Charleston with eight receptions and one TD each. ... The Tigers lost their first nonconference game since 2012 last week.