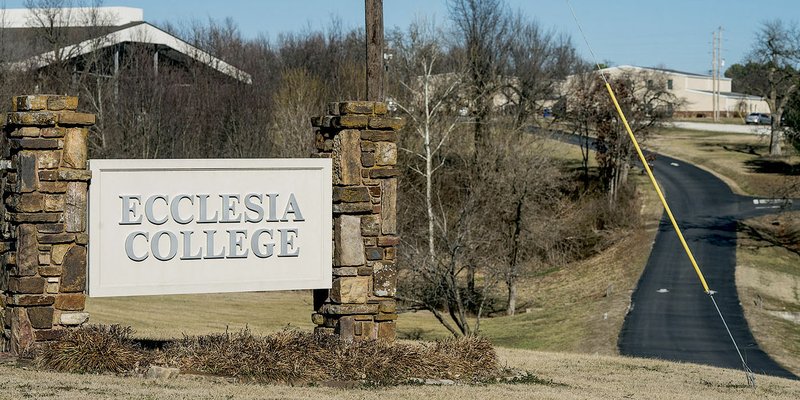 Ecclesia College, shown in this file photo, is a private Christian college in Springdale.

The Department of Finance and Administration has asked state Attorney General Leslie Rutledge's office to sue Ecclesia College to reclaim at least $600,000 of kickback-tainted grants the college received from the General Improvement Fund.

"It appears that a significant portion, if not all, of these funds were procured in coordination with criminal activity that has been and is being prosecuted by the United States attorney's office," Larry Walther, director of the state's department of finance and administration, wrote to Deputy Attorney General Monty Baugh in a letter dated Sept. 7.

The governor and Walther have followed the kickback case since it began and agreed the state should seek recovery, Gov. Asa Hutchinson's office said Thursday.

"It is clear from trial proceedings that the money sent to Ecclesia College through grants over the course of 2013 and 2014 was obtained by fraud," Hutchinson said in a statement. "This is taxpayers' money, and it is essential that we pursue the recovery of it." 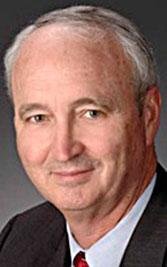 The Northwest Arkansas Democrat-Gazette acquired a copy of the letter Thursday as the last of the four defendants in the Ecclesia kickback case was being sentenced.

"With the sentencing of Micah Neal, we now have a better understanding of what is owed in restitution from the criminal defendants in this investigation," the attorney general's office said in a statement. "Attorney General Rutledge is reviewing all of the information available and plans to take appropriate action to recover any money owed to Arkansas taxpayers."

Neal was a state representative serving with then-state Sen. Jon Woods when they steered state General Improvement Fund grants to the school in 2013 and 2014. Oren Paris III , school president at the time, then passed kickbacks to Woods and Neal through Randell G. Shelton Jr., a consultant hired as a fundraiser by the college.

Woods of Springdale received an 18-year, four-month sentence to federal prison last week for his role in the kickback scheme. Neal, who is also from Springdale and who cooperated with investigators, received three years probation in his sentencing in U.S. District Court on Thursday.

Paris received a sentence of three years in prison from the same court on Wednesday. Shelton received a six-year prison sentence last week.

The governor and the Finance Department tracked the federal criminal case as it progressed, said J.R. Davis, spokesman for Hutchinson. As sentencing approached, the governor and Walther decided all the facts about the Ecclesia case had come to light and a civil suit could begin without overlapping and possibly interfering with the criminal proceedings, Davis said Thursday afternoon.

"I don't know what the theory of a case against the college could be," said Travis Story of Fayetteville, Ecclesia's attorney.

Testimony at the trial showed neither the college's governing board nor its administration outside of Paris knew of the kickbacks, he said. Further, the grant money was spent for exactly the purposes the grants were given for, he added.

"The last grant was received in early 2015, and generally there is a three-year statute of limitations on any suit you can file," Story said. "We're past that."

The three-year limit usually applies to suits brought by individuals but not by the state, said Howard Brill, a University of Arkansas law professor and former state chief justice.

The state can claim "unjust enrichment," Brill said, which is a legal principle in Arkansas law dating back to 1940.

Proving an unjust-enrichment case has three components, said Brill, who served by appointment as Arkansas chief justice from September 2015 to December 2016. The state's suit would have to prove the college received a benefit, that there was something unjust in getting that benefit and that returning the money would be equitable. The case against the college on all three points appears strong, he said.

None of the grant money went to Paradigm, Story has said. All payments for the consulting on fundraising and planning came from another college account, he said earlier.

Federal court-ordered restitution to be collected from Woods, Paris, Neal and Shelton should compensate the state for its loss, said spokesman Charles Robbins of the U.S. attorney's office in Fayetteville. If the state launches a suit and gains compensation from the college instead, those defendants can petition to have their restitution payments reduced, he said.

U.S. Attorney Duane "Dak" Kees had said earlier in the criminal case the federal government cannot claim restitution from the college, only from the criminal defendants.

Woods and Neal not only steered $550,000 in grants to Ecclesia directly, but the two also encouraged other lawmakers to send General Improvement money to the school. Woods also received a direct kickback for a $100,000 grant he helped obtain from another lawmaker, according to court documents.

In all, Ecclesia College got $715,500 in Improvement Fund grants from 2013 to early 2015, according to federal court documents and court testimony. Woods and Neal are the only two of the 10 lawmakers who steered grants to Ecclesia who were implicated in the kickback scheme.

The improvement fund contains mainly tax money left unspent at the end of the state's two-year budget cycle. The fund also includes interest earned on state accounts. After the state Supreme Court in 2006 declared the Legislature could not direct appropriations to local-level projects, lawmakers adopted the process of dispersing such funds through regional improvement districts.

On Oct. 5, 2017, the Supreme Court also declared the district distribution process unconstitutional. Walther's letter says the grant money should be returned to the state treasury and not the development districts that administered the grants because of the ruling.

"The department is acutely aware of the unique nature of this request to claw back the GIF funds paid over by the Planning and Development District to Ecclesia and does not undertake this request lightly," the letter from Walther says.

Ecclesia spent $692,500 in state grants from 2013 through 2014 to buy land, according to the U.S. attorney's office for the Western District of Arkansas. The school either bought or paid off the loans on 48.5 acres from 2013 through 2014 with the taxpayer money. Its grant applications said the land was needed to accommodate the college's growth.

The 20.4 acres Ecclesia still owns of that tract include about 640 feet of frontage along Arkansas 112 that begins about six-tenths of a mile south of the ramp to the recently opened U.S. 412 Northern Bypass, connecting Arkansas 112 to Interstate 49.

Much of Ecclesia's land is classified as tax-exempt, land records from Benton and Washington counties show. The college owns 36.3 acres in Washington County and 202.2 acres in Benton County, according to land records. Of that 238.5 acres, 214 are exempt from property taxes, land records show.