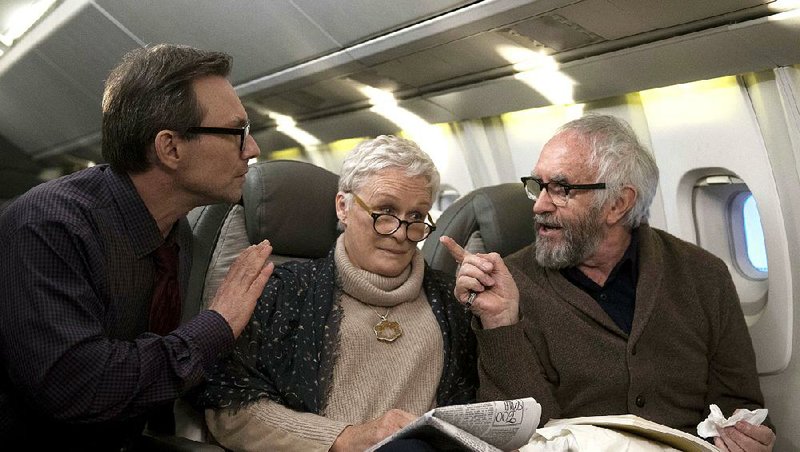 Nathaniel Bone (Christian Slater) says hello to Joan (Glenn Close) and Joe Castleman (Jonathan Pryce) as they fly across the Atlantic to pick up Joe’s Nobel Prize for Literature in the sly black comedy The Wife.

Bjorn Runge's The Wife has been around awhile -- I remember reading about it a year ago when it screened at the 2017 Toronto International Film Festival. At the time, I thought it had a delicious premise -- a lot of marriages (including my own) are interdependent and collaboratory to the point that it's impossible to say what one might have accomplished without the other. But one of the partners still operates in the penumbra of the other.

When movies don't come out promptly after showing at TIFF, we might be inclined to suspect there's something wrong with them. (Though, to be fair, a year really isn't that long; All the Boys Love Mandy Lane premiered at TIFF in 2006 and it was 2013 before it was theatrically released in the United States.) So when we started seeing trailers for The Wife earlier this summer, it was natural to assume that it was going to be a late summer dump job, one of those movies that's released quietly and fades away without doing too much damage to anyone's reputation. That's apparently the strategy Focus Features adopted with the recent The Little Stranger, a Gothic horror film that reliable sources tell me actually deserves more studio support than it has received.

So, it's mildly surprising that The Wife turns out to be quite good, a commercially viable movie that doesn't condescend to the general audience it courts. It feels like a throwback to Hollywood movies of the '40s and '50s that assume a certain level of cultural alertness among moviegoers. Here we're asked to care about things like literary jealousy and reputation.

In what might be Glenn Close's best role since she boiled that rabbit, she plays Joan Castleman, the helpmate of Saul Bellow/Philip Roth-esque New York literary figure Joe Castleman (Jonathan Pryce, who also played a Roth-like character in Alex Ross Perry's 2014 Listen Up Philip).

It's 1992, and Joe and Joan are taking the Concorde to Stockholm to pick up his Nobel Prize. We learn his win knocked the up-and-coming Bill Clinton off the cover of The New York Times Sunday Magazine, a detail that hints at the Bill-and-Hillary dynamic of Joe and Joan's relationship. Exactly how much does she have to do with his success?

It's obvious he can't function without her; he has become forgetful and she anticipates his needs before he realizes them. She knows where he left his glasses, when he should take his pills, what he should eat for lunch. She seemingly makes allowances for the requisites of his genius -- she suffers his affairs and serves as a buffer between him and their needy son (Max Irons), a young writer who is "developing his voice." She sublimates herself. She doesn't even want him to thank her from the podium when he receives the award. She doesn't want to be seen as the long-suffering wife.

Anyway, on the plane, they're accosted by nervy fanboy/hack writer Nathaniel Bone (Christian Slater) who desperately wants Joe to cooperate with the biography he's writing. Joe is brusque, disdainful and dismissive. Joan advises caution. She senses that Bone is reckless. "There's nothing more dangerous than a writer whose feelings have been hurt," she advises.

As usual, she has assessed the situation correctly. For Bone has a crackpot theory about Joe. He sees Joan as a way to get to the great man. "I don't think people give the spouse enough credit," he wheedles.

There are flashbacks to the '50s where we learn that Joan (played by Close's daughter Annie Starke) once had writerly aspirations herself; she was Joe's pupil before she was his lover. But these were undone by the old days' gray flannel sexism (which is echoed in the all-male class of Nobel laureates honored along with Joe). His first wife threw him out when she found out about Joan; she then set up house with him and dropped out of school to take a job while he wrote the first novel that she both inspired and nudges toward discovery.

While the whole production is intelligent and sparkly, the plot creaks a bit beneath the weight of its hardly original conceit. But guessing it doesn't spoil the fun.

The movie is designed to showcase Close and she makes the most of it, turning in a nuanced, measured portrait of a wounded woman holding herself in check. An odd and satisfying mingling of icy control and submerged fury plays across her face in repose. There's a wild and dark potential in this woman, and in the end, maybe even ambition. 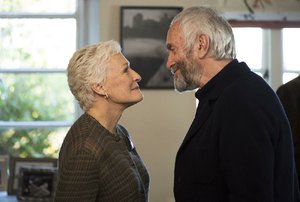