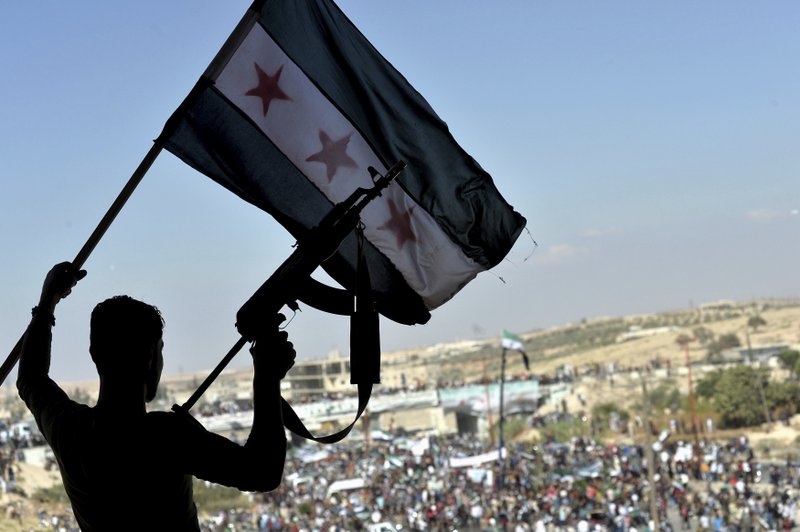 Thousands of protesters attend a demonstration against the Syrian government offensive to Idlib, in the northwestern town of Maarat al-Numan, also known as al-Ma&#x2bf;arra, south of Idlib, Syria, Friday, Sept 14, 2018. In cities and towns across Syria's last opposition-held province, Idlib, residents poured into the streets on Friday to demonstrate against President Bashar Assad's government in defiance of an expected offensive to retake the territory. (Ugur Can/DHA via AP)

BEIRUT -- In cities and towns across Syria's last opposition-held province, Idlib, residents poured into the streets Friday to demonstrate against President Bashar Assad's government in defiance of an expected offensive to retake the territory.

In the provincial capital, Idlib city, and in towns including Kafranbel, Dana, Azaz, Maaret al-Numan and al-Bab, demonstrators filled the streets after noon prayers and chanted against Assad, raising the tri-color green, white and black flag that has become the banner of Syria's 2011 uprising, activists said.

"The rebels are our hope; Turks are our brothers; the terrorists are Bashar, Hezbollah and Russia," read a banner carried by residents in the village of Kneiset Bani Omar, referring to Turkey which backs the opposition, and Lebanon's Hezbollah and Russia that have joined the war along with Assad's forces.

"There will be no solution in Syria without Assad's fall," read another banner carried in the northern village of Mhambel.

The demonstrations were reported on the activist-run sites Aleppo Media Center and Orient News and other social media pages.

Fridays have become the customary day for protests throughout the Arab world since the 2011 uprisings that swept through the region.

Assad's government and its backers, Russia and Iran, say Idlib is ruled by terrorists, and have threatened to seize it by force.

Wissam Zarqa, a university teacher in Idlib, said demonstrators were flying the tri-color flag to rebut the government line that Idlib is dominated by the al-Qaida linked Levant Liberation Committee group.

The province, population 3 million, is now the final shelter for close to 1.5 million displaced Syrians who fled fighting in other parts of Syria. Many say they will not return to government-ruled areas.

Government and Russian forces bombed towns and villages in the province earlier this week, killing more than a dozen civilians and damaging two hospitals. But the strikes eased Wednesday amid talks between the opposition's main regional sponsor Turkey, and Russia and Turkey.

"We will continue our efforts with Iran and with Russia. ... [and] on international platforms as well," said Cavusoglu in comments carried live on Turkish television.

Turkish media said the two leaders would meet in the Russian city of Sochi.

Turkey has warned strongly against military action, saying it would trigger a humanitarian catastrophe. Its military and defense chiefs visited border areas on Friday to inspect troop reinforcements sent to its Hatay and Gaziantep provinces.

Turkey has 12 military posts inside Idlib province. Turkey is sending additional troops, tanks and howitzers into Syria to boost its forces on the ground.

"Turkey is beefing up its forces in Idlib, who might be threatened deep inside Syria in case of a flareup of violence," Nihat Ali Ozcan, an analyst at the Ankara-based Economic Policy Research Foundation of Turkey, said by phone on Friday. "That also amounts to a message to Syria and its allies that it does not want to step aside."

The United Nations said that in the first 12 days of September, over 30,000 people were internally displaced by an intense aerial bombing campaign. Most of the displaced headed toward the border with Turkey, according to the U.N. Office for the Coordination of Humanitarian Affairs, packing already overcrowded camps there.

The U.N.'s World Food Program said it, alongs with partners, was already delivering monthly food rations for nearly 600,000 people. It said it was prepared to deliver emergency food assistance for up to 1 million people.

Save The Children said in a statement that it will continue to support extensive humanitarian programs through Syrian partner organizations in the country's northwest. It added that this includes running primary care clinics and a maternity hospital, vaccination and food security programs, supporting a network of schools and carrying out child protection work.

Information for this article was contributed by Selcan Hacaoglu of Bloomberg News.