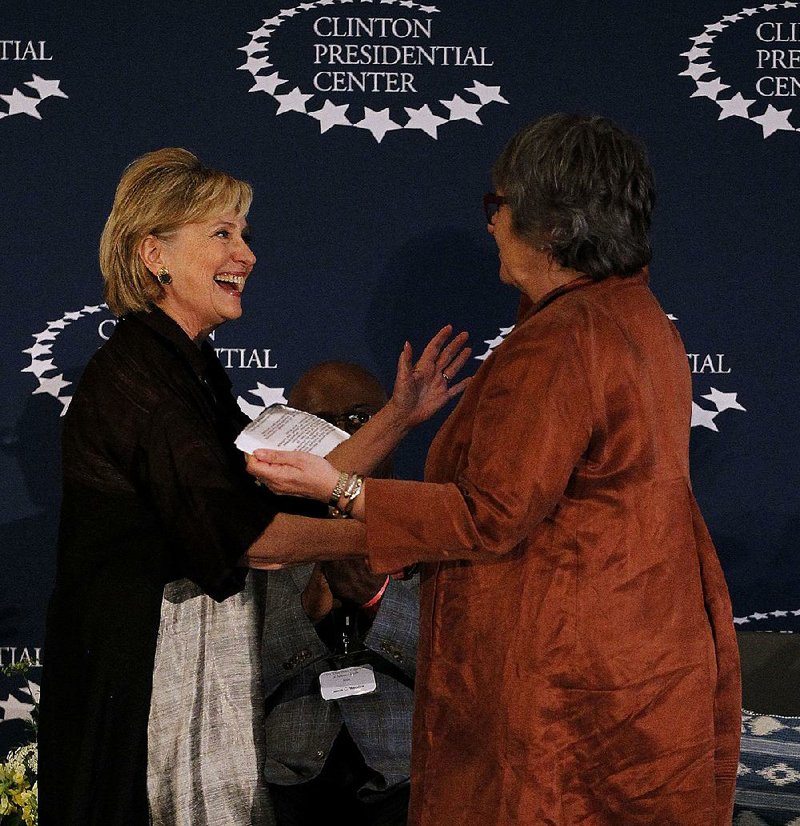 Hillary Clinton spoke Sunday at the opening of a craft exhibit that honors the original show she organized 25 years ago as the nation's first lady.

When the Clintons moved into the White House, Hillary Clinton decided to create a White House exhibit featuring craft work, which she called the "oldest and most original art form." Clinton heralded the work of Arkansas artisans, particularly those from the Ozarks, who have kept their traditions alive for centuries.

Stephanie Streett, the executive director of the Clinton Foundation, credits Hillary Clinton with bringing more diverse artists to the White House and with spearheading the original craft exhibit.

"She believed that art was a critical component of our culture, and it should be accessible to everyone," Streett said.

Organizers have eagerly waited to display this exhibit, and the 25-year anniversary seemed like the right time, said Terri Garner, the director of the Clinton presidential library.

The craft display will show at the center until March 31. The center has presented various temporary exhibits since it opened in 2004, including collections about Elvis Presley, the Clintons' parents and a solo showing of Dale Chihuly, whose glass work is also featured in the craft show, Clinton said.

When Clinton first suggested the idea of the craft exhibit in the '90s, she was met with some opposition, she said.

"Now I will not sugarcoat the fact there were people who did not think that was a good idea," Clinton said.

But she maintained that craft is an important part of American history and should be celebrated.

"I've been really excited about the opening of this exhibit," Clinton said.

James Watkins, a ceramic artist, created art for the collection, which after showing in the White House later showed in other museums, including the Smithsonian Institution.

"The continued interest in handmade objects is a testament that even in the digital age, there's still a need for the intimacy and personal, personal connection that handcrafted objects bring," Watkins said.

Josh Simpson, a glass blower from western Massachusetts, has work that is presented in the gallery. Since the 1970s he has created glass spheres that are meant to represent Earth.

"In the '70s, nobody was thinking about the preciousness of Earth and how tiny and important it is as its own little spaceship," Simpson said about why he began creating the spheres.

Simpson's sphere in the collection is 10 inches in diameter. He creates his glass from sand, soda ash and lime and creates colors by adding different metals to the glass. In 1993, when his work was a part of the original collection, Simpson looked at it as important to elevating his work and the work of all American artisans, he said.

"It's such a big deal because first of all, I absolutely adore the Clintons," Simpson said.

Richmond Osei-Danguah and Christopher Matahder, students at the Clinton School of Public Service, attended the event together. Osei-Danguah, who is from Ghana, remembers when Clinton visited his home country, and he wanted to see her in person, he said.

Matahder, who is from Kenya, came to the exhibit's opening because he wants to learn more about American culture, he said.

"More or less, I'm here to learn, to see, to experience," Matahder said.