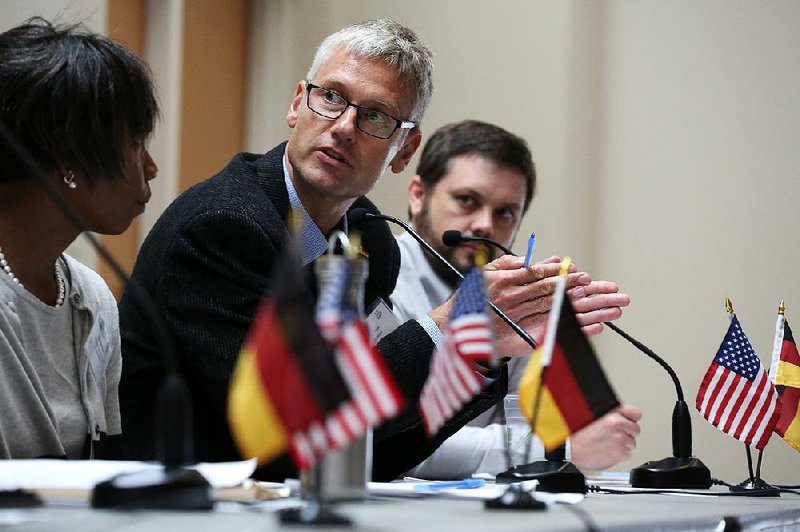 Matthias Pfeil of Dresden, Germany, speaks during the Transatlantic Walkability Symposium on Thursday in Little Rock.

A summit with a delegation from Germany last week allowed city leaders, staff members and advocates to air ideas for how to make Little Rock more walkable.

Matthias Pfeil, transport development planning coordinator for the city of Dresden, said Arkansas' capital city immediately reminded him of his own when he arrived ahead of Thursday's discussion, especially because of the trees and the river trail.

But Little Rock's statistics, zoning and structure put it a world away from a German city flush with mixed-use buildings and train lines, some speakers and panelists said. According to Walk Score, an algorithm that rates U.S. cities cited by Little Rock architect James Meyer on Thursday, Little Rock is a car-dependent city and the third-most walkable city in Arkansas despite being the largest. Searcy and Fort Smith rank higher.

Promoting walkability has been a hot topic of discussion in Little Rock's current mayoral race as a way to both retain young people and make resources accessible for people of all ages and incomes.

Thursday's program was part of a roadshow featuring discussions about sustainable mobility sponsored by the German American Chambers of Commerce.

Crystal Bowne, program coordinator at national nonprofit America Walks, said many of Little Rock's streets are built for cars, when in past decades they included public space that encouraged walking.

"If you design a road for cars, you're going to get cars," she said. "I'm not advocating for horse and buggy, but what I'm saying is, we know how to fix this."

Others, including architect Mason Ellis, pointed to planned projects in Little Rock that would connect different parts of the city, such as bike paths linking the Central High and Capitol View/Stifft Station neighborhood to the Arkansas River Trail.

Tab Townsell, the executive director of Metroplan, the long-range transportation planning agency for central Arkansas, said Little Rock's form of government is an obstacle. Instead of a two-headed local government that includes both a city manager and a full-time mayor, Little Rock should give its mayor the power to implement infrastructure that promotes walkability.

Some panelists pointed to feasible, low-cost changes small businesses can make to encourage their employees to be active. Chris Hancock, chairman of the young professionals organization Create Little Rock, said companies can encourage employees to cycle to work by providing showers and a place to put one's bike.

Erin Gildner, vice president of the Arkansas chapter of the United Spinal Association, said one way to promote walkability is to bring people of all physical abilities to the table in planning discussions. Gildner, who uses a wheelchair to get around, said potholes and sidewalks in disrepair sometimes add as much as 10 minutes to her travel time.

"I think it's extremely important to have a broad group of individuals that provide advice," she said.

Bowne also referred to the need for diverse voices.

"People know what they need in their own neighborhoods," she said.