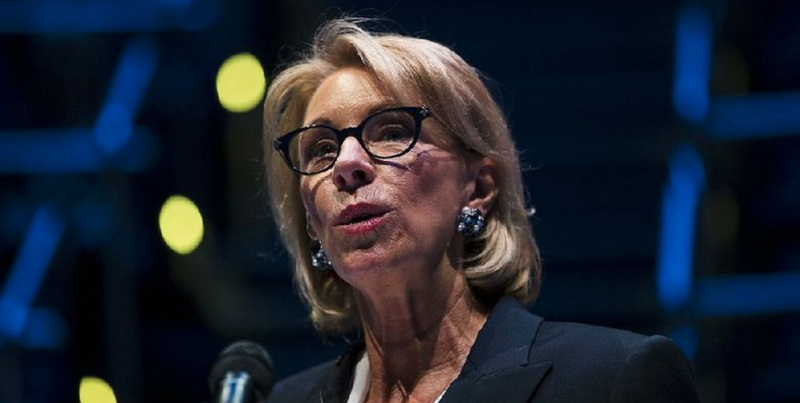 An Arkansas State University attorney on Tuesday defended the school as "committed" to free-speech rights after the school was targeted in remarks by U.S. Education Secretary Betsy DeVos a day earlier.

DeVos spoke at an event in Philadelphia commemorating Constitution Day and criticized actions taken by some college administrators regarding campus free speech.

"As the purpose of learning is forgotten, ignored or denied, we are inundated daily with stories of administrators and faculty manipulating marketplaces of ideas. Take what recently happened to a student at Arkansas State University," DeVos said, according to a transcript of her prepared remarks posted on the U.S. Department of Education's website.

The ASU student "wanted to recruit for a student organization she was founding, but soon learned it first had to be approved by the university," DeVos said. "Even then, she still had to apply for a permission slip to distribute materials. And all of the activity had to occur within the confines of a 'speech zone,' typically obscure, small, cordoned-off corners of campus where free expression is 'permitted.'"

DeVos said the student "proceeded to set up shop," then was "promptly removed by a university administrator and a campus police officer."

ASU System General Counsel Brad Phelps, in a statement to the Arkansas Democrat-Gazette, said the university "is committed to the First Amendment with policies and procedures that are designed to further that right and not restrict it."

A federal lawsuit was filed in December on behalf of the student, Ashlyn Hoggard, and Turning Point USA at Arkansas State University, according to court documents submitted to U.S. District Court in Jonesboro. Representing them are attorneys for the nonprofit Alliance Defending Freedom, a legal advocacy group founded by proponents of Christian evangelicalism, including James Dobson.

Named as defendants in the suit are trustees for the ASU System and system President Chuck Welch, among others.

ASU's policy, according to its website, states there "are several areas designated as a Free Expression Area for speeches and demonstrations," and that the areas generally are available from 8 a.m. to 9 p.m. Monday through Friday.

The policy, approved by trustees in 1998, states that requests to use other areas "for speeches and demonstrations" should be made "at least 72 hours in advance." The policy, in a section on the distribution of written material, states that no "table or booth shall be used in distribution areas except at the Free Expression Area and only with permission from the Director of Student Development and Leadership."

In a court document filed in April, ASU defendants said they "specifically deny that all expressive activity on ASU's campus is limited to the Freedom of Expression Areas."

They also denied a claim made in the lawsuit that fundamental rights to freedom of speech and due process of law were violated. They stated in court documents that "an ASU administrator and campus security approached Ms. Hoggard" and an employee of Turning Point USA "to explain to them the process for becoming a registered student organization and the requirements of the Policy."

Michael Behrent, an associate professor of history at Appalachian State University in North Carolina, wrote a report this year on campus free-speech legislation that was approved for publication by the American Association of University Professors Committee on Government Relations.

"Turning Point USA has a history of both challenging free speech policies that exist on campuses and of trying to provoke liberals and leftists on campus," Behrent said.

Behrent's report noted that, as of March, eight states has passed some sort of campus free-speech legislation, including Missouri in 2015 and Tennessee last year, with the recently passed laws in those two states prohibiting free-speech zones.

The issues raised by DeVos on Monday extended beyond free-speech zones.

DeVos on Monday remarked critically about "our relativistic culture" and the idea that truth is "only [a] personal point of view," calling this a "threat that America's campuses face today."

She cited the importance of "reasoned argument" and "discovering facts."

"An institution of learning cannot be both a forum for all ideas and an advocate for some at the expense of others," DeVos said.

Behrent said campus speech issues are "muddy," but he sees "an overall problem" with a legislative push that "is really about primarily defending particular positions, particularly political positions," rather than considering "the full scope of free speech on campus."

In a 2018 report, the nonprofit group Foundation for Individual Rights in Education stated that out of 461 colleges and universities whose policies it reviewed, 52 had "free speech zone" policies.

Amanda Hoelzeman, media relations director for UCA, said in an email that the school is a "free-speech campus."

Its policy states that an area near the southeast corner of the campus's Ferguson Chapel "is hereby designated as a limited public forum," able to be used without registration on "a first-come, first-served basis" at any time. The policy states that "other areas of campus must be scheduled for such use and approved by the university."

Hoelzeman referred to the policy language, last updated in 2013, when asked for the rationale behind it: "The purpose of this policy is to provide fair and reasonable guidelines concerning the rights of individual assembly and free speech while maintaining order and access to the campus of the University of Central Arkansas."