Man calls his release from life in Arkansas prison 'surreal' 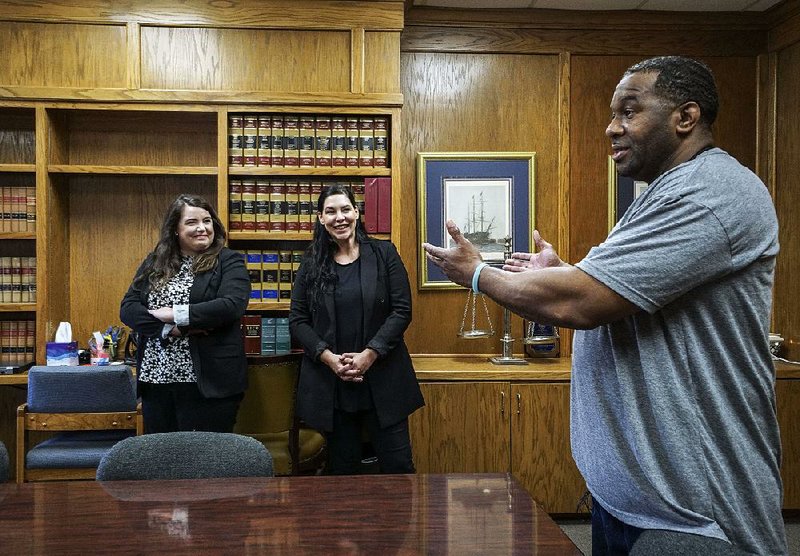 John Brown thanks two of the attorneys involved with his release, Rachel Wester (left) of the Midwest Innocence Project and Erin Cassinelli of Little Rock, in Cassinelli’s office Wednesday in Little Rock.

When John Brown walked out of the Dallas County jail in Fordyce a free man on Wednesday after spending more than half his life in prison, it was "surreal," he told reporters about an hour later.

The 51-year-old man from Las Vegas was released Wednesday after spending 26 years in the Arkansas Department of Correction for a slaying that U.S. District Judge Billy Roy Wilson said last month he never should have been convicted of.

Wilson, finding that the conviction was based on a false confession made to a questionable source on a recording that was suspiciously disposed of before trial, threw out the conviction and ordered Brown's release from prison within 30 days. The 30th day would be Friday, coincidentally 30 years to the day since a 78-year-old Fordyce woman, Myrtle Holmes, was raped and killed during a break-in at her home on Sept. 21, 1988.

While the state is appealing Wilson's order, the Dallas County prosecuting attorney's office hasn't decided whether to retry Brown. Wilson at first ordered the state to either release Brown or recharge him by Friday. Wilson later denied the state's request to keep Brown imprisoned during the appeal, noting that it could take two years, but agreed to give the state more time to decide whether to pursue a retrial.

While the attorney general's office has expressed disappointment at the decision and vowed to "ensure justice is done," defense attorneys say there was never any evidence against Brown in the first place, so they don't know how the case could possibly be retried.

Brown didn't live in or near Fordyce, but he and his father were in town at the time of the woman's death, having driven from Nevada to visit an aunt, as they did every summer, Brown said Wednesday.

He spoke to reporters as he sat in a Little Rock law office wearing just-purchased casual clothes -- a gray T-shirt, jeans and tennis shoes -- having just been to Cotham's, a nearby burger joint, where he ate a cheeseburger with fried green tomatoes, and French fries on the side. It was the first time he'd eaten a real cheeseburger in more than 26 years, he said.

He wore a cross on a chain around his neck and a smile on his face, and called his attorneys -- Rachel Wester and Tricia Bushnell of the Midwest Innocence Project in Missouri, and local attorney Erin Cassinelli -- his "dream team."

The Innocence Project, contacted about two years ago by their Wisconsin counterpart after Brown got the ball rolling by contacting the New York affiliate, took up his case after one of three other people convicted of the murder confessed to single-handedly committing it. Other attorneys are working on obtaining a new trial for the other people who were convicted by a Dallas County jury in 1992.

Brown said that as soon as technicalities are worked out allowing him to travel, he will return home to Las Vegas, where he has aunts, uncles, a 33-year-old son and grandchildren. He said family members have visited him in prison four or five times a year, and as his support group, kept him from ever giving up hope that he would walk free some day.

"I never gave up faith. I had days, but I just kept the faith," said the barber who regularly practiced his trade behind prison walls and plans to return to the profession once back in his hometown.

He said he plans to stay initially with his fiancee, a Nevada woman he grew up with but didn't have a relationship with until a few years ago, when she mistakenly heard that he had developed cancer and began praying for him and visiting him.

"I knew I was innocent, but I just couldn't prove it by myself," Brown said. But he said that once the Innocence Project took up his case, he felt a newfound confidence, and regularly told himself, "I know one day soon I'll be home."

"I was blessed to have a team of God-fearing attorneys that showed the world what justice had been done to me," he said. He repeatedly said that he felt "blessed" and always knew that "my family loves me."

The former prisoner who had been serving a life sentence smiled at the memory of a few hours earlier, when prison officials he had come to like were among those who gathered to wish him well as he left the Cummins Unit south of Pine Bluff and, later, the jail in Fordyce. The release immediately followed a hearing in the Dallas County courthouse in Fordyce, during which the current prosecutor, John Thomas Shepard, agreed to release him pending his appeal.

Asked if he harbored any ill will against the state, Brown replied, "I have no ill will toward nobody. God is good."

He said he always knew that Reginald Early, the man who confessed to the crime in 2015, was being punished by his conscience for allowing others to take part of the blame.

Brown said that although he was able to go outside occasionally while in prison, the sunshine felt particularly good Wednesday.

"It was so surreal," he said. "I just took a deep breath because it felt like a weight had been lifted off my shoulder."

No family members were able to be there to greet him because his release occurred so suddenly, Cassinelli said, adding that several of them attended an evidentiary hearing last September in a Little Rock federal courtroom.

After the September hearing, U.S. Magistrate Judge Joe Volpe denied Brown's request for a new trial while saying he was troubled by the way law enforcement officers had focused on a mentally deficient co-defendant to try to convict Brown. Volpe recommended that Wilson dismiss Brown's petition, but Wilson instead granted it in a 26-page order taking the 1992 prosecution team to task. He noted that Robin Wynne, who is now an Arkansas Supreme Court justice, was a deputy attorney on the case 30 years ago.

"We're ecstatic with Judge Wilson's ruling," Wester told reporters Wednesday, adding that the ruling gives her hope that another court -- the 8th U.S. Circuit Court of Appeals in St. Louis -- will agree with Wilson's decision.

Meanwhile, Brown said, "I'm going home! I'm so happy that when I get home, I'm going to cry tears of joy."