What caused flames to shoot 12 feet? Theories abound after fire flies from hole in Arkansas town

Flames flew from a hole in the ground in Midway early Monday.

They stretched 12 feet into the air, to the nose of Dr. Win Moore, whose picture is on a billboard advertising his services at Baxter Regional Medical Center's Bone & Joint Clinic in Mountain Home.

"I told my wife, 'I missed church Sunday. You think He's throwing lightning bolts at me?'" Moore said.

But the fire remains a mystery.

"We have lots of conspiracy theories but we don't have anything nailed down as what the cause is," he said. "Just a freak of nature of some sort."

Pendergrass said the fire was on private property and burned for about 40 minutes. Local utilities reported no problems in the area. The hole was about the size of a volleyball.

Pendergrass said there has been much speculation on social media.

"I have seen that it was the devil come out of the ground, that the devil has come out and given us warning," Pendergrass said.

But the county judge doesn't believe the fire was a warning from the underworld.

Others on Facebook figured a meteorite had crashed to earth or that a long dormant volcano was roaring back to life.

Pendergrass said there are no underground pipes said in the area where the fire flared, but a Phillips 66 station had once been "just up the road."

The Arkansas Department of Environmental Quality was contacted about the possibility of underground gasoline storage tanks.

Nate Olson, a spokesman for the state agency, said an inspector had been dispatched to Midway and an investigation is underway.

"At this time, we are still gathering more information," Olson said Wednesday.

Midway is about 6 miles northwest of Mountain Home at the intersection of Arkansas 5 and Arkansas 178, just east of Bull Shoals Lake. It is home to Baxter County Regional Airport and the county's industrial park.

Sierzchula said he thinks methane may have been the fuel, but he doesn't know what sparked the ignition. Pendergrass said it could have been a lit cigarette tossed from a passing vehicle.

Methane gas is colorless, odorless and flammable. It's a product of biological decomposition of organic matter and of the carbonization of coal.

"The thing is it was a clean burn," Siezchula said. "It was a very low-hydrocarbon fuel, let's put it that way. It really wasn't getting the right amount of oxygen because the burn was orange instead of blue."

Concerning the hole, he said, "There was absolutely no soot."

Pendergrass said Donald Tucker, the Midway fire chief, checked the temperature in the hole shortly after the fire and it was 780 degrees. When Tucker arrived on the scene, the flames were still about 8 feet high, Pendergrass said.

"Light rain had happened the night before," he said. "Foggy, misty air could have trapped methane."

"What ignited it? I don't know," Sierzchula said. "It could have been lightning. There were storms in the area."

Sierzchula said the fire burst out from what appeared to be a groundhog hole.

"There was an existing hole there," he said. "We may find a burned up groundhog in there." 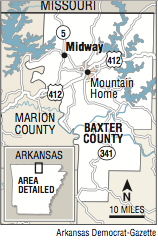 A map showing the location of Midway.