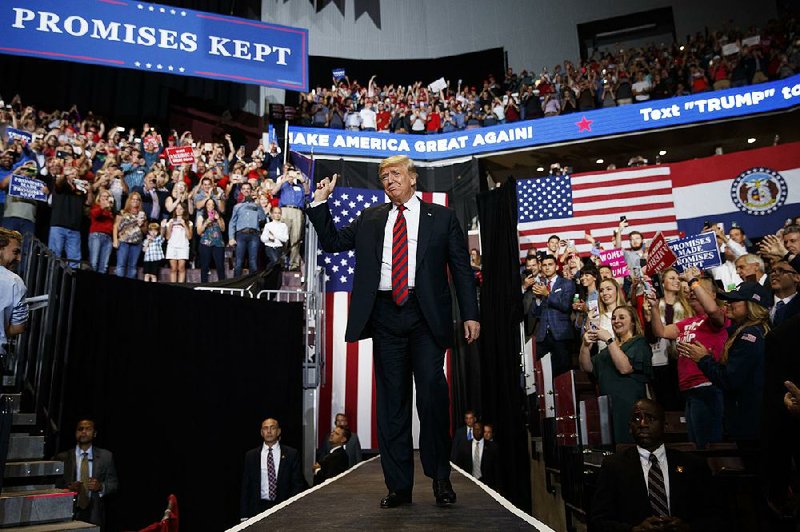 President Donald Trump greets the crowd as he arrives for a rally Friday in Springfield, Mo., in support of Josh Hawley, who is trying to unseat Democratic U.S. Sen. Claire McCaskill.

"They are not just extreme, they are frankly dangerous, and they are crazy," Trump told a crowd of about 12,000 on Friday night at JQH Arena at Missouri State University.

"Get out in 2018 because you're voting for me," Trump said. "A vote for any Democrat this November is a vote for massive regulation, massive taxes, and I hate to say it, massive crime."

Trump said Democrats want to abolish U.S. Immigration and Customs Enforcement, which he said would allow gangs like MS-13 to expand in the country.

"The Democrat Party is held hostage by far-left activists, by angry mobs, antifa, by deep-state radicals and their establishment cronies," said Trump, using a contraction to refer to anti-fascist far-left militant groups. "Did you ever see what happens when they take the masks off antifa? They have guys that look like they live ... in the basement of Mom and Dad's house." 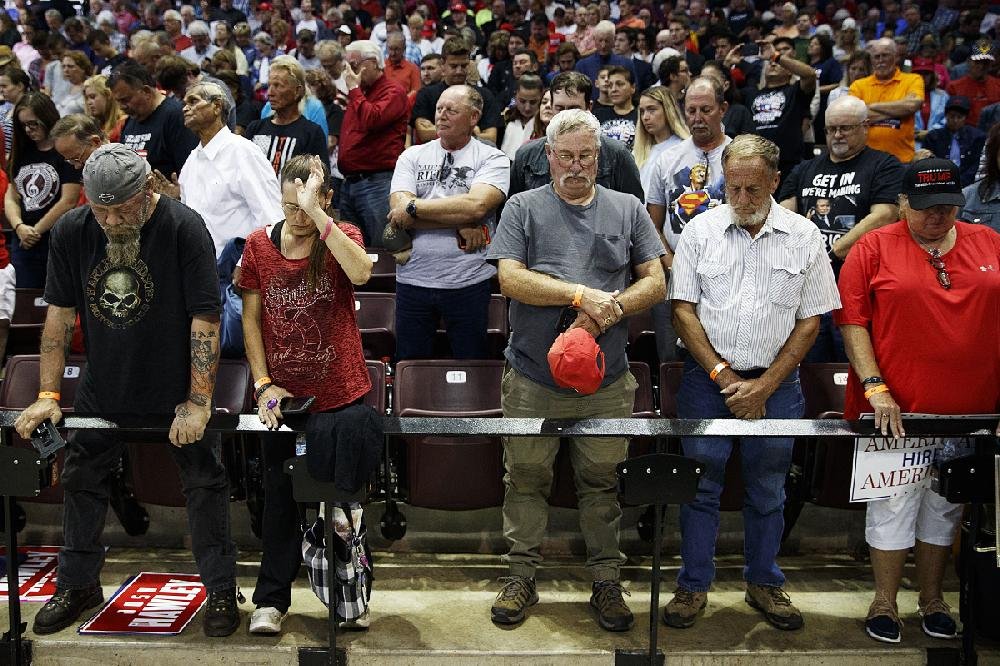 Trump said Democrats want sanctuary cities, or "cities of crime," but Republicans want the country to be a sanctuary for "law-abiding Americans."

Trump was in town to support Josh Hawley, Missouri's attorney general, who is running as a Republican in an effort to unseat U.S. Sen. Claire McCaskill, D-Mo.

Hawley spoke for about five minutes Friday night, saying there were 20,000 people outside the arena who couldn't get in because there wasn't enough room. The arena seats 11,000, and people were also standing on the floor.

"Sen. McCaskill said the border wall is embarrassing," Hawley said. "She has mocked the president for wanting to build it. She wants to raise your taxes. She said she's going to vote 'no' on Judge Brett Kavanaugh. I don't know who she's with, but she's not with the state of Missouri."

Trump nominated Kavanaugh to fill a vacancy on the Supreme Court created by the retirement of Justice Anthony Kennedy.

Christine Blasey Ford has accused Kavanaugh of sexually assaulting her at a party when they were in high school.

Trump said Kavanaugh was a "fantastic man" and looked like he was a Supreme Court judge straight out of "central casting."

Trump said "we have the true swamp in Washington."

Trump said he's been cracking down on China's unfair trade practices and working with Canada on tariffs. He said many countries have "lived so well off of us for so long."

Trump emphasized the importance of the military, saying the U.S. is purchasing "the finest planes, ships, tanks and submarines."

"Jobs are important, but there's nothing more important than our military," Trump said. "There's no substitute in this world for American power and American strength."

"For years, you watched as your leaders apologized for America," said Trump. "Now you have a president who will never apologize for America."

Trump paused while the crowd roared, stomped and chanted "U.S.A."

"This isn't about me. This is a movement."