An oddity in Arkansas politics has sprouted in a state House district located deep in the Delta: a competitive candidate without a party.

State Rep. Mark McElroy, a former Democrat turned independent, is running for re-election against two challengers, one a Democrat, the other a Republican.

McElroy shed his partisan label this spring after former Circuit Judge Don Glover, the Democrat, announced plans to challenge him in the primary. A local pastor, Ricky Lattimore, had already announced plans to run as a Republican in House District 11, which mostly follows the Mississippi River in the far southeastern corner of Arkansas.

Both of his challengers are from Dermott. McElroy lives in Tillar.

Two years ago, McElroy, a longtime county judge in Desha County, had fended off a challenger in the Democratic primary. By 2018, however, he said he felt the party had left him behind.

"I tell people when I ran I'm too conservative to be a Democrat and too poor to be a Republican," McElroy said during a recent interview at his state Capitol office. "I'm kind of stuck in the middle."

Without a party endorsement, McElroy had to collect 237 signatures in order to get on the ballot. He did so, he said, the same way he's courted voters in each of his past three elections to the Statehouse: riding his bike along U.S. 65 -- the major thoroughfare through the district -- and meeting voters at intersections and in the median.

Still, as the only member of the 100-member House who is not a Democrat or Republican, McElroy, 62, faces an unusual test in the Nov. 6 general election.

"There have not been many independents, or third-party candidates elected" in Arkansas, said Jay Barth, a political science professor at Hendrix College. Incumbency in the state, he added as a point, "is pretty potent."

McElroy's opponents have set up their own appeals to voters, but in separate interviews, both suggested they were still becoming familiar with policy questions.

Lattimore, 60, said he "pretty much supports the governor 100 percent," while Glover, 74, said voters in the traditionally Democratic district were unclear as to "what [McElroy's] impact has been" in the Legislature.

Neither challenger offered up an example of a vote or policy stance McElroy had taken that they disagreed with.

McElroy said the main issues in his three-county district are the roads -- many of which are still gravel -- and education. A member of the House Education Committee, he said higher pay will help bring teachers to the district. He also supports an expansion of pre-kindergarten programs.

Fixing the roads will require a new funding source, McElroy said, pointing to the possibility of adding a fee or tax to sales of automotive parts, but he stopped short of supporting a raise in the gas tax.

A broader concern, he said, was Gov. Asa Hutchinson's latest proposal for an individual income tax cut. If approved in the legislative session that begins in January, the tax cut would total an estimated $192 million a year and mostly benefit the state's highest earners.

In 2015 and 2017, the Legislature enacted the governor's plans to cut individual income tax rates for people who make up to $75,000 a year in taxable income. The plans are projected to reduce revenue by a total $150 million a year.

"If you keep cutting it and keep cutting you're going to have to cut programs, because there's no way we're going to run a deficit," McElroy said. "People don't pay taxes to do without services and goods and you to brag about how much money you got in the bank. They pay those taxes so you're not like a third-world country and have good roads, and schools and good buildings and libraries."

When asked about the tax plan, Lattimore reiterated his backing for Hutchinson: "I support whatever the governor has in place."

Glover said he was opposed: "I don't support it at the expense of the poor."

All three candidates said they supported the state's private-option Medicaid expansion program, which has been re-dubbed Arkansas Works under Hutchinson. The governor supported re-authorization of the health insurance program during his first term and has added a work requirement for some recipients.

During the last regular legislative session in 2017, McElroy's signature achievement was sponsoring a bill setting up a funding mechanism through which school districts equip buses with seat belts by having voters approve an added property tax. McElroy said he thinks the law "will really save lives."

While some school districts have started purchasing their new buses with seat belts, Jerry Owens, the senior transportation manager at the Arkansas Division of Public School Academic Facilities and Transportation, said he was not aware of any districts that had passed the tax to equip all their buses.

Glover said he questioned the effectiveness of McElroy's law, though he said he had no specific plans of his own for filing legislation.

"My specific plan right now is getting elected," said Glover.

Asked about his legislative plans, Lattimore said he had been in talks with the Arkansas Department of Veterans Affairs about expanding transportation services between southeast Arkansas and the federal VA hospital in Little Rock. He offered no critique of McElroy's record.

"I haven't looked into his total voting record," said Lattimore. "I'm not running this campaign based on what McElroy has done. I just feel I can do more."

In the fundraising race, McElroy led both his challengers. According to reports filed with the state last month, McElroy had $16,002 in his campaign account, Glover had $11,953 and Lattimore had $6,371. 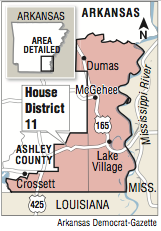