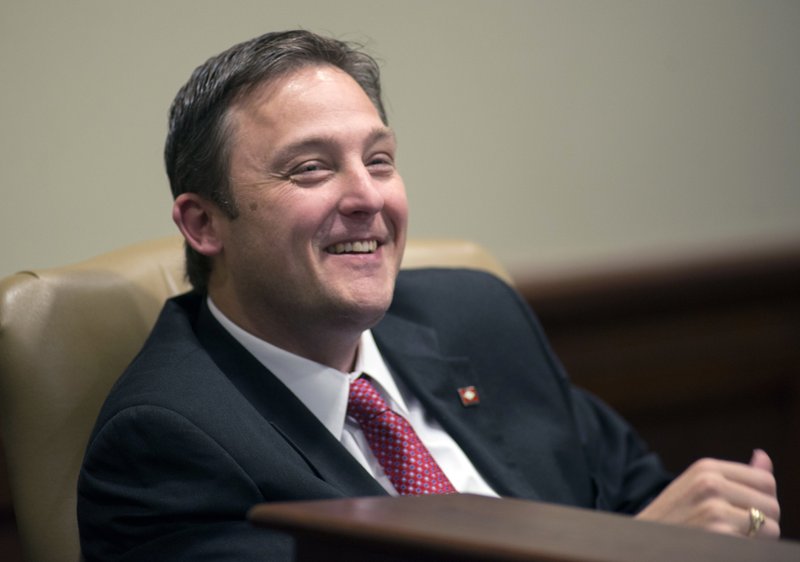 House Revenue and Taxation Committee Chairman Joe Jett lent $16,000 to then-House Speaker Jeremy Gillam in the fall of 2016 to help Gillam's financially struggling berry farm, both said recently when asked by a reporter.

Gillam, of Judsonia, said he hopes to pay back the loan by the end of this year. Gillam resigned from the state House of Representatives in June to become the University of Central Arkansas' director of governmental affairs and external relations.

The loan was made before Jett switched from the Democratic Party to the Republican Party in December 2016 and before Gillam reappointed Jett as chairman of the House's taxation committee in January 2017. Jett lives in Success in Clay County in northeast Arkansas.

Senate President Pro Tempore-elect Jim Hendren, R-Sulphur Springs, said he suspects that other state lawmakers have loaned one another money over the years.

He said he advanced what he believes was roughly $4,000 to then-Senate Revenue and Taxation Committee Chairman Jake Files, R-Fort Smith, to help Files cover some checks. Hendren was Senate majority leader at the time. Hendren said he recently wrote off the loan as a gift.

In June, Files was sentenced to 18 months in federal prison and ordered to pay restitution for offenses that included obtaining state money for a ball field project but instead using it for his own purposes. The former senator pleaded guilty to wire fraud, bank fraud and money laundering charges in January.

Gillam initially told a reporter that he believed that state law didn't require him to disclose what he described as a farm-to-farm business transaction. Then he was informed by the Arkansas Democrat-Gazette that Sloan suggested that the loan should be disclosed under state law.

The instructions for the Statement of Financial Interest show that disclosure is required of "[d]ebts not incurred in the ordinary course of business [that] include, but are not limited to, such items as ... money borrowed from individuals, other than family members, who are not normally in the business of lending money."

The Statement of Financial Interest form states that debts of at least $5,000 are required to be disclosed, Sloan said Thursday in an email to this newspaper.

Gillam also filed an amendment to his report for 2015 to disclose that then-state Reps. David Branscum, R-Marshall; Bill Gossage, R-Ozark; and Rep. Jon Eubanks, R-Paris, wrote him checks for $700 each in December 2015. That was after this newspaper reported that Gillam Farms had state tax liens filed against it for more than $2,000. Gillam was vice president of Gillam Farms.

Gillam said he had forgotten about receiving those checks, which were designed to help the farm pay its delinquent taxes. He said Branscum reminded him when Gillam was trying to figure out what else he needed to disclose on his updated Statements of Financial Interest.

Branscum, who is now the U.S. Department of Agriculture's rural development director in Arkansas, recalled that Gillam initially declined Branscum's offer to give Gillam $2,100 in December 2015. Gillam later agreed to accept that money after Branscum, Gossage and Eubanks said they would give $700 each.

Gossage, who is now Gov. Asa Hutchinson's deputy chief of staff for external operations, confirmed through Hutchinson spokesman J.R. Davis that he wrote a $700 check to Gillam.

Eubanks acknowledged that he also wrote a $700 check to Gillam, adding, "I have done it for people at home in a bind."

House Speaker Matt Shepherd, R-El Dorado, said Jett informed him about the loan to Gillam after this newspaper contacted Jett.

That's the only loan between representatives that he is aware of, Shepherd said.

"I have no reason to believe what they did was wrong," he said, referring to the loan.

But Shepherd said he has asked the legislative staff to "bring to me either legislation or possibly a rule to prohibit loans among legislators.

"I have got to give it some further thought whether it be just an outright ban, whether there is some threshold, some maximum amount, but that's something that I'm certainly looking at, and I don't think that going forward that we should have loans among members for significant amounts of money," Shepherd said. Gillam appointed Shepherd as chairman of the House Judiciary Committee in 2015 and 2017.

Hendren said he plans to ask the Senate ethics committee to study loans between lawmakers.

"Sometimes there is a gray area between loans and gifts and what deals are between people who have known each other for years," he said.

Nicholas Birdsong, a policy associate at the National Conference of State Legislatures' Center for Ethics in Government, said he's not aware of any specific state rule or statute relating to loans among legislators in states across the nation.

"There very well could be, but I haven't come across anything specific to it," he said in an email to this newspaper. "There are several states that have legislative ethics statutes discussing loans generally, which might apply to some loans between legislators.

"Under some circumstances and in some states, loans given and received may need to be disclosed under financial disclosure requirements," Birdsong said.

"Loans may be included in the definition of a gift, particularly for unsecured loans not made through the ordinary course of business or with terms more favorable than those generally available to the public," he said.

Jett said he agreed to provide the loan of $16,000 to Gillam after a handful of people went out to dinner with Gillam. Jett said he told Gillam that he would be more than willing to assist Gillam if Gillam needed financial help.

He said Gillam eventually called him and asked for assistance.

"I would do the same thing for a friend in need," Jett said in an interview. "It was outside our legislative duties.

""I knew there was nothing nefarious going on, and there was no pro quid quo," he said, referring to Gillam's reappointment of Jett as House Revenue and Taxation Committee chairman.

"I never gave it a second thought," Jett said. He said his family farms about 8,000 acres and grows soybeans and rice.

Gillam said the loan had nothing to do with him reappointing Jett as committee chairman.

Gillam said he used the money to pay farm-related expenses.

"That was in the fall of 2016, and I had my stroke so I had been out of commission a little bit with helping my brother and that kind of stuff," he said.

Gillam said the loan didn't have an agreed-upon interest rate and was based on a handshake.

"I plan on trying to put interest on that, but there was not a set thing," he said.

Gillam said he's hoping to repay the loan by the end of this year "just because we are trying to sell all the tractors and everything and get everything liquidated."

He has said he and his brother sold their 450-acre berry farm in White County in May. Ritter Crop Services of Jonesboro bought the farm for $1,364,925, according to the White County assessor's office.

The speaker and the president pro tempore now earn $47,277 a year; other legislators make $41,393 a year. All lawmakers also may get paid per diem and mileage for attending legislative meetings.

Hendren, who is president of Hendren Plastics Inc., said he believes the loan to Files was made during the 2015 regular legislative session.

"Back in the session, I was made aware of the fact that he had some checks that had been returned and was in a real financial bind because of some vendors not paying him," Hendren said.

"He needed a way to clear that until he could collect from his vendors, and the request was made to me through another legislator that if I could help him on a short-term basis, so that he could cover those checks and not have a big news story about checks being returned, and I agreed to do that," Hendren said.

"I don't remember the exact amount because I would have to go and check, but I think it was about $4,000 that I advanced him," Hendren said. "It became apparent shortly thereafter that he was in a lot worse financial trouble than what I had been made aware of and he wasn't going to be able to repay it, so recently I just wrote it off as a gift."

Hendren said he's not mad about having to write off the loan to Files.