Maureen Skinner describes herself as a professional listener and problem solver.

“That’s why people should vote for me. I’m not there to create problems. I’m there to solve problems,” said Skinner, 47, of Conway, a licensed psychological examiner who is making her first bid for elected office, running for the state Senate as a Democrat in the Nov. 6 general election.

Skinner is challenging Sen. Jason Rapert, a Republican who has served in the state Senate since 2011.

Rapert said voters should re-elect him in part because “every single promise that I made in my first race I have either accomplished or filed legislation and made good on the promise to pursue those policies.

“People know exactly where I stand. They have had an opportunity to see can I deliver on public policy issues that I make a commitment to, and I have been very humbled that they have actually re-elected me two times,” he said in a recent interview.

Rapert, 46, is founder and president of Rapert Financial & Associates. He also is a private shareholder and board member for Ulockit Security Devices in Conway.

“I am well known that I stand up for God and country, and I take a stand for Judeo-Christian values in our country. My opponent is an actual member of atheist groups and has worn that on her sleeve for many years,” Rapert said.

Skinner said she is a member of an online freethinkers group, but she isn’t an atheist.

“I think it’s a legal term, and I feel like he is doing everything he can do to discredit me,” Skinner said. She said she was baptized as a Christian by a church in California, and has attended Jewish, Hindu and other services to learn about other faiths.

Rapert is president and founder of Holy Ghost Ministries, a nonprofit group involved in Christian ministry, training, missions and humanitarian projects throughout the world, according to its website.

He is president and founder of the American History and Heritage Foundation, a nonprofit group dedicated to educating the public about American history and heritage, according to its website.

The foundation is the private sponsor of the Ten Commandments monument installed on the state Capitol grounds under a 2015 law that Rapert sponsored. He said he is not paid a salary by either group.

Rapert said Skinner has “embraced the Democratic socialist model” because she is endorsed by Our Revolution PAC, which grew from U.S. Sen. Bernie Sanders’ presidential campaign in 2016, and supports Medicare for All, a single-payer health care system.

But Skinner said she isn’t a socialist.

“I think that is one of those dog-whistle words that are being run around,” she said.

“I am socially progressive and fiscally conservative. ‘Fiscally responsible’ probably would be a better phrasing of that,” Skinner said in a recent interview. “My values mostly closely align with the Democratic Party values, but I’m not a straight party-line person.”

She also said Medicare for All isn’t a Democratic socialist idea.

Skinner and Rapert are vying for a four-year term in Senate District 35. District 35 consists of most of Faulkner County, including all of Conway and part of Vilonia, but not Greenbrier. The district also includes a sliver of Perry County.

Skinner, who was born in Los Angeles, is a 1989 graduate of Fox Rural Special High School in Stone County. She said she has lived in Senate District 35 for nearly three years.

After earning an associate degree in general education from Arkansas State University, she received her bachelor’s degree in psychology at the University of Central Arkansas in 2009 and a master’s degree in counseling psychology from UCA in 2012. She said she is engaged to be married and has a son and a daughter.

Rapert, who was born in Pocahontas, is a 1990 graduate of Maynard High School. He received his bachelor’s degree in political science and sociology from UCA. He is married and has two daughters.

Skinner said her top priorities as a senator would include creating more jobs, improving education and providing access to the state’s Medicaid program because that’s what people in Senate District 35 told her are their main goals.

Rapert said his top priorities will include continuing to work with Republican Gov. Asa Hutchinson on policies to create more jobs and create a fair, equitable and competitive tax structure. He noted that two of Arkansas’ neighbors — Tennessee and Texas— don’t levy income taxes.

He noted that he co-sponsored 2015 and 2017 laws to cut individual income tax rates by about $150 million a year. He also sponsored a 2013 law that is expected to reduce the sales tax on groceries from 1.5 percent to 0.125 percent, effective Jan.

Skinner also said she favors the state’s version of Medicaid expansion that provides health insurance to about 260,000 low-income people, but she opposes the work requirement on those participants.

“I understand the idea behind it. But it is really not beneficial to the people that need the most help,” she said.

“I support what we had to do in the state of Arkansas to survive as the federal government has put onerous mandates on individual states,” he said. “I still fundamentally believe that the legislation commonly called Obamacare was an overreach of the federal government. I believe it was unconstitutional.”

The federal Patient Protection and Affordable Care Act was signed by then-President Barack Obama, a Democrat, in 2010. Arkansas has waivers from the federal government for its version of Medicaid expansion.

The state is picking up 6 percent of the cost of the program this year. Its share will increase to 7 percent next year and then to 10 percent in 2020 under existing federal law.

The state projects its matching funds for the program will total $135 million in fiscal 2019, which started July

Skinner said she favors repealing a 2017 state law that allows concealed weapons holders with extra training to carry their guns on college campuses and some other public places, calling it “a terrible plan.”

Rapert, who voted for the 2017 law, said he is a defender of the Second Amendment.

“My position on abortion is that it is settled law, and it is nobody else’s business what women do with their bodies.

“That’s between a woman and her doctor. I think we could spend our money working towards education and prevention as opposed to trying to pass laws that affect one part of the population,” she said. “Outlawing abortion doesn’t outlaw abortion. It just outlaws safe abortion.”

Rapert sponsored a 2013 law that banned most abortions starting after 12 weeks of pregnancy, and federal courts declared it unconstitutional.

“I believe that life begins at conception,” Rapert said. “My positioning has been, if it is my druthers, my preference is we save every single life that is out there.

“We know that in the state of Arkansas, abortion rates have precipitously declined over the last few years as a result of not only that bill, but other pro-life legislation that we have put into place, and now Arkansas is the second-most pro-life state in the nation,” based on the Americans for Life group’s rankings, Rapert said.

Skinner said she favors a proposed initiated act that would phase in an increase in the state’s minimum wage by $2.50 per hour to $11 per hour by 2021. Rapert said he opposes Issue 5. 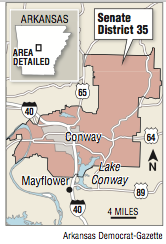