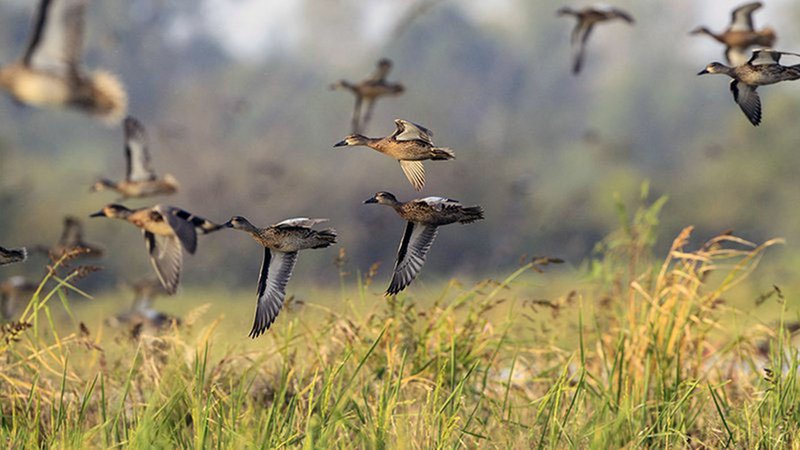 Blue-winged teal and other early-migrating waterfowl are beginning their annual trek south. Nearly all of the public, moist-soil land managed by the Arkansas Game and Fish Commission are in excellent condition to welcome them.

A recent report showed outstanding crops of native vegetation as well as excellent stands of millet cover in units where moist-soil plants were slow to develop or knocked back to encourage better growth next year.

Shirey Bay Rainey Brake and Dave Donaldson Black River Wildlife Management Areas in northeast Arkansas both showed impressive results in their moist-soil habitat this year, despite some nail-biting moments caused by flash floods in late August, according to Game and Fish officials.

Zach Yancey, biologist at Dave Donaldson Black River Wildlife Management Area, said a cover crop of millet was planted in the Brookings Moist Soil Unit this year to augment native vegetation that had to be set back to remove some less desirable plants.

"It's been so wet through the summer the last few years that we couldn't do as much disturbance as we wanted," Yancey said. "Perennial plants began to take hold, which do not produce the high-value seeds we want. As part of our plan, we disked those plants to bring back annuals next year and planted a cover crop of millet, just as we would on sites that don't respond to moist-soil management techniques through the year."

The crop was nearly lost when 10 inches of rain fell within two days, flooding the young stand at a critical time.

"We had both staff members on Dave Donaldson and two others from nearby areas to gather up four pumps from the region and get them going," Yancey said.

Millet can be a good stopgap, but Yancey is a strong proponent of native vegetation over planted crops when possible.

"A good, natural moist-soil plant response is more beneficial to the ducks," he said. "It gives an excellent food source and these waterfowl rest areas provide a true resting area for ducks to go without being disturbed."

"We follow a set procedure that involves pulling water off at the right time, flooding at the right time and manipulating the plants if needed to produce the best response from seed-heavy annual species," Homan said. "We assess it throughout the year, and, if it's not producing up to standard, we may come back with a cover crop to get the food value of the unit up, but we want native plants as much as possible."

Homan said native plants not only produce an excellent food resource, but they also are much more resistant to parasites and flooding, which makes them a great fit for the low-lying areas typical of state wildlife management waterfowl areas.

She added seeds from native vegetation remain long after agricultural waste like soybeans have germinated or rotted once fields are flooded.