Not giving up, says nominee for high court; Kavanaugh slams what he labels as a smear campaign 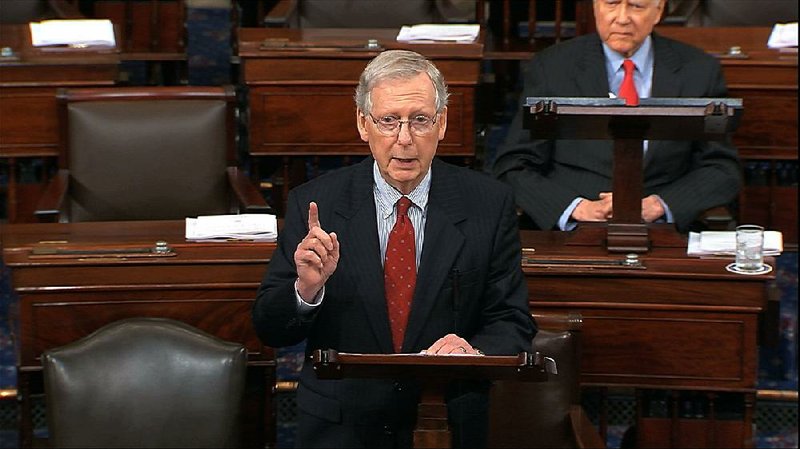 Majority Leader Mitch McConnell of Kentucky, speaks about Supreme Court nominee Judge Brett Kavanaugh on the floor of the Senate on Monday on Capitol Hill in Washington.

President Trump and fellow Republicans dug in Monday in their support for Judge Brett Kavanaugh, as the Supreme Court nominee vowed to fight back against additional allegations of sexual misconduct, which he called a coordinated smear campaign.

In a letter to leaders of the Senate Judiciary Committee, Kavanaugh said he would "not be intimidated into withdrawing from this process."

Kavanaugh reiterated that he won't bow out in an interview with Fox News that aired Monday night. Speaking with his wife, Ashley, at his side, the nominee said, "I'm not going anywhere" and dismissed what he called "false accusations."

"I'm not going to let false accusations drive us out of this process and we're looking for a fair process where I can be heard and defend my integrity, my lifelong record," he said. 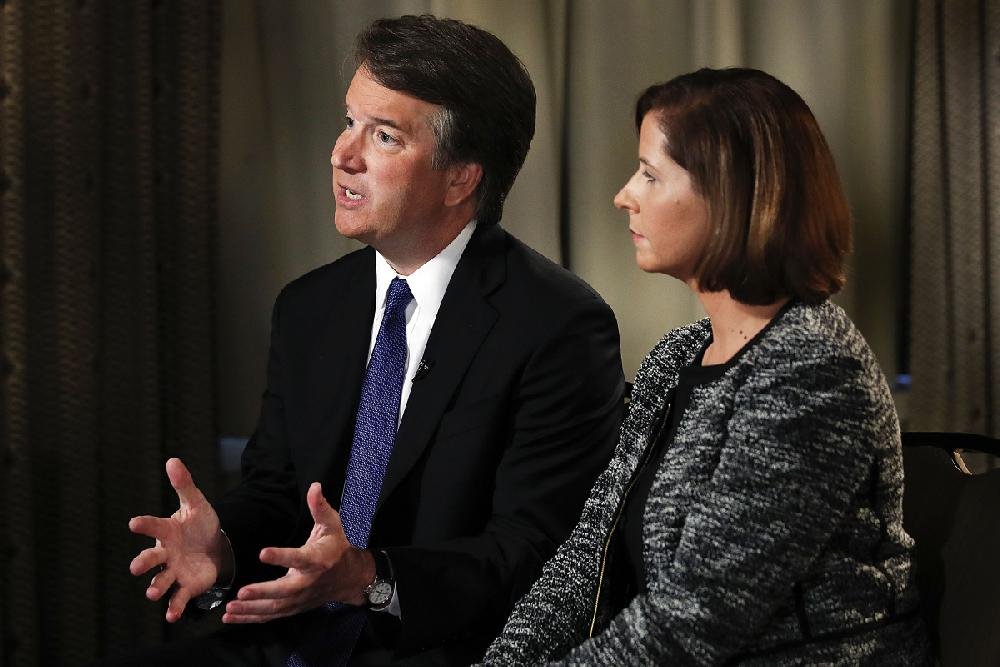 Brett Kavanaugh, with his wife Ashley Estes Kavanaugh, answers questions during a Fox News interview on Monday in Washington about allegations of sexual misconduct against the Supreme Court nominee.

Trump and other Republicans echoed that assessment Monday, with the president saying he is looking forward to a confirmation vote.

In comments to reporters, Trump vowed to support his nominee "all the way," calling Kavanaugh "a man with an unblemished past" and characterizing the allegations swirling around him as "totally political."

"There's a chance that this could be one of the single most unfair, unjust things to happen for a candidate for anything," Trump said.

His comments, made as he entered United Nations headquarters in New York, were his first since a report Sunday night on a second allegation of sexual misconduct by Kavanaugh.

In the Senate, Majority Leader Mitch McConnell, R-Ky., lashed out at Democrats, accusing them of throwing "all the mud they could manufacture" and decrying a "shameful smear campaign." He defended Kavanaugh and vowed that this "fine nominee" will receive a vote in the Senate.

On Sunday, The New Yorker magazine reported that Deborah Ramirez, a classmate of Kavanaugh's at Yale University, said he exposed himself at a party when they were both first-year students.

Later on Monday, The New York Times reported on a mysterious entry in Kavanaugh's 1983 yearbook. Among the reminiscences about sports and booze in Kavanaugh's page is the entry: "Renate Alumnius."

The word "Renate" appears at least 14 times in Georgetown Preparatory School's 1983 yearbook, on individuals' pages and in a group photo of nine football players, including Kavanaugh, who were described as the "Renate Alumni." It is a reference to Renate Schroeder, then a student at a nearby Catholic girls' school.

Two of Kavanaugh's classmates say the mentions of Renate were part of the football players' unsubstantiated boasting about their conquests.

"They were very disrespectful, at least verbally, with Renate," said Sean Hagan, a Georgetown Prep student at the time, referring to Kavanaugh and his teammates. "I can't express how disgusted I am with them, then and now."

This month, Renate Schroeder Dolphin joined 64 other women who, saying they knew Kavanaugh during their high school years, signed a letter to the leaders of the Senate Judiciary Committee. The letter stated that "he has behaved honorably and treated women with respect."

When Dolphin signed the Sept. 14 letter, she wasn't aware of the "Renate" yearbook references on the pages of Kavanaugh and his football teammates.

"I learned about these yearbook pages only a few days ago," Dolphin said in a statement to The New York Times. "I don't know what 'Renate Alumnus' actually means. I can't begin to comprehend what goes through the minds of 17-year-old boys who write such things, but the insinuation is horrible, hurtful and simply untrue. I pray their daughters are never treated this way. I will have no further comment."

Alexandra Walsh, a lawyer for Kavanaugh, said in a statement: "Judge Kavanaugh was friends with Renate Dolphin in high school. He admired her very much then, and he admires her to this day.

Dolphin said she had never kissed Kavanaugh. "I think Brett must have me confused with someone else, because I never kissed him," she said through her lawyer.

In an interview on Fox News on Monday, Kavanaugh defended his high school behavior in general terms. "People might have had too many beers on occasion and people generally in high school -- I think all of us have probably done things we look back on in high school and regret or cringe a bit," he said.

A White House spokesman, Raj Shah, declined to comment beyond the statement from Kavanaugh's lawyer.

The Judiciary Committee has scheduled a hearing Thursday with Ford, the California professor who has alleged that Kavanaugh sexually assaulted her while both were teenagers in Maryland.

Ford has alleged that Kavanaugh drunkenly pinned her to a bed, groped her and put his hand over her mouth to stifle her screams as he tried to take off her clothes at a house party in the early 1980s. Kavanaugh has firmly denied the accusation.

On Saturday, Ford sent a personal letter to the Judiciary Committee chairman, Sen. Charles Grassley, R-Iowa, in which she asked for "fair and respectful treatment" and said she had "one motivation in coming forward -- to tell the truth about what Mr. Kavanaugh and his friend Mark Judge did to me."

Several Republican senators pressed for a quick vote after the hearing.

"What we are witnessing is the total collapse of the traditional confirmation process for a Supreme Court nominee," Sen. Lindsey Graham, R-S.C., said in a string of tweets Monday morning. "It is being replaced by a game of delay, deception, and wholesale character assassination.

"In my view, the process needs to move forward with a hearing Thursday, and vote in committee soon thereafter," Graham said.

Sen. Orrin Hatch, R-Utah, another member of the Judiciary Committee, accused Democrats of "demeaning both the Senate and the Supreme Court through their partisan games and transparent attempts at character assassination."

"We should hear from Dr. Ford on Thursday as planned," Hatch said in a statement. "Then we should vote."

Despite the forceful rhetoric by Kavanaugh and his GOP supporters, it remained unclear how three moderate Republicans -- Sens. Susan Collins of Maine, Arizona's Jeff Flake and Alaska's Lisa Murkowski -- would react to the latest accusation. With the GOP's Senate control hanging on a razor-thin 51-49 margin, defections by any two Republican senators would seal his fate if all Democrats vote "no."

Murkowski wouldn't say Monday whether she's closer to a decision. "There's a hearing on Thursday," she said.

Besides the new allegation from Kavanaugh's college years, Michael Avenatti, the attorney for adult-film actress Stormy Daniels, has claimed to be representing another accuser from the judge's high school years.

"This is starting to feel like a vast left-wing conspiracy," White House counselor Kellyanne Conway said Monday on CBS This Morning.

Dozens of people protesting Kavanaugh were arrested Monday outside Collins' Capitol Hill office. Many wore black "Be A Hero" shirts and chanted slogans including, "We will not be silenced."

Protests on Capitol Hill were buttressed by walkouts away from Washington in support of Ford and Ramirez that were staged by dozens of liberal groups. The campaign was promoted on Twitter under the hashtag #BelieveSurvivors, and several Democrats in Congress -- including members of the Senate Judiciary Committee vetting Kavanaugh -- posted photos in support.

At Yale Law School, dozens of students dressed in black staged a sit-in Monday to protest the nomination of Kavanaugh, a graduate of the school. Organizers said allegations of sexual assault and harassment should be taken seriously, and Kavanaugh poses a "real threat" to the country. Other Yale students traveled to Washington to protest Kavanaugh's nomination on Monday.

In his first comments since the New Yorker report, Senate Minority Leader Charles Schumer, D-N.Y., reiterated his call for the FBI to reopen its background check of Kavanaugh, a step the White House has resisted.

"There is only one way to get to the bottom of these allegations against Judge Kavanaugh and prevent the nation from being thrown into further turmoil: an independent background check investigation by the FBI," Schumer said on Twitter. "If President Trump and Senate Republicans are so certain the allegations against Judge Kavanaugh aren't true, then why are they blocking the FBI from reopening the background check and investigating?"

Trump has made clear he won't order an FBI investigation of the allegations. And McConnell said that Thursday's Judiciary Committee hearing would proceed and that full Senate consideration would follow "in the near future," though he mentioned no date.

The senators, who all serve on the Judiciary Committee considering Kavanaugh's nomination, filed the complaint Monday in federal court in Washington. The Central Intelligence Agency is also named as a defendant in the Freedom of Information Act lawsuit.

The Democrats called their lawsuit "a last resort," compelled by Republican refusal to seek "whole categories of documents" relevant to the confirmation process.

The suing senators, who also include Vermont's Patrick Leahy, Rhode Island's Sheldon Whitehouse, Hawaii's Mazie Hirono and Cory Booker of New Jersey, claim the National Archives acknowledged their request on Aug. 8, but has failed to act on it. They also asked for information from the CIA and from Bush's presidential library, according to court papers. The library has complied. The agency has not.

Print Headline: Kavanaugh slams what he labels as a smear campaign