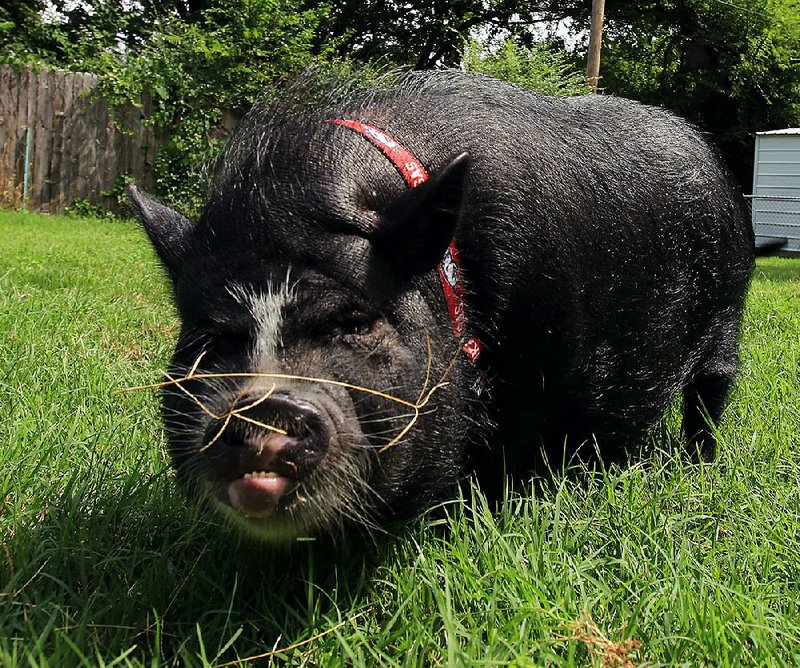 This pet potbellied pig, shown in 2013, was cast out of Little Rock by city ordinance. The owners sued but eventually gave up and moved to a more pig-friendly locale. Now, Eureka Springs is banning such swine.

There's been a stink in Eureka Springs.

The City Council is working on an ordinance to ban them.

Alderman Mickey Schneider said she made the proposal at Monday's council meeting because of complaints about the smell coming from a residence on Kingshighway where two pet potbellied pigs were often in the yard.

"Neighbors are being wiped out by the extremely odorous pig poop," Schneider said.

Basically, it will require changing one word in the city code, she said.

Section 6.08.01 of Eureka Springs' code says "it shall be unlawful to keep any hogs, horses, mules, cattle, goats or sheep in the city."

The word "hogs" will be changed to "swine," Schneider said.

"While hogs and pigs are different, swine encompasses all of them," she said during Monday's council meeting. "In talking to quite a few of our area vets, they said while a potbellied pig is a different critter from a hog, it still can push 200 pounds, which is not really cool in your backyard in the middle of a Victorian village."

Steve Eddington, a spokesman for Arkansas Farm Bureau, said the term "hog" generally refers to swine that are heavier than 120 pounds and are raised for slaughter.

"So swine probably includes animals that are not raised for slaughter," he said.

The council voted 4-1 in favor of having City Attorney Tim Weaver draft an ordinance to ban pigs and make some other changes to the city's animal laws.

The ban will include potbellied pigs and other miniature pigs that are kept as pets, Schneider told the council.

She said the proposal will have to go through three votes of the City Council, and that will take six weeks.

"The gist of it is no hogs or pigs will be allowed in town," Ann Armstrong, the city clerk, said, assuming that the ordinance passes all three readings. "I think some folks don't realize when they get them how huge they can become."

Jim Evans, the Eureka Springs animal control officer, said he had received one or two complaints regarding the pigs.

Alderman Tom Buford said he complained about the pigs in June, before he was on the City Council.

"There was someone in the Historic District with a couple of pigs laying out in their yard," Buford said. "One of the pigs weighed about 50 pounds and the other weighed about 200 pounds."

"My complaint was you really can't have pigs in a town where you have terrain that's up and down," he said.

Houses in Eureka Springs are built on hillsides and are often very close together, Buford said. The smell from pigs could easily waft to neighboring houses.

"You could smell the pigs," he said, remembering his walk by the house on Kingshighway. "I just thought having pigs in a tourist town with B&Bs and all was not something you'd want."

Alderman Melissa Greene told the council at the Aug. 27 meeting that there had been a "problem" with the pigs.

"Because of not cleaning it up, the smells make it pretty unbearable for neighbors to be in their backyard," she said.

On Tuesday, Evans said he believed the couple with the potbellied pigs had moved out of town.

"I'm almost 100 percent sure they're already gone, but we don't want any more problems," Evans said. "I didn't even know there were any pet pigs in town. I had no idea."

Everybody interviewed for this article said they didn't know the name of the couple who owned the potbellied pigs.

Buford said their close neighbors didn't complain because they didn't want to get crossways with the pig owners.

And that could develop into a real stink.