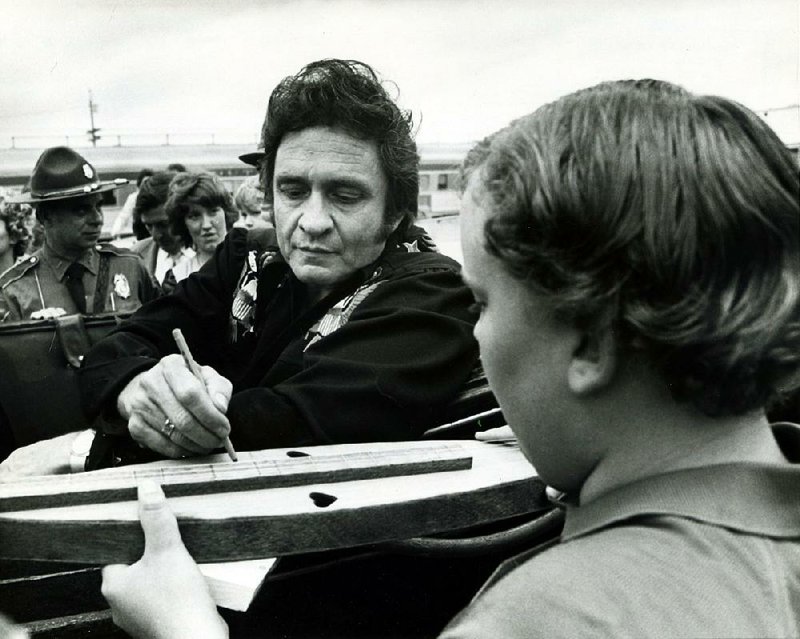 Even after he became an international superstar, Johnny Cash often returned to his home state, such as in this 1976 visit.

Plans to build a Johnny Cash museum are underway in the singer's birthplace, with the hope that it will one day be the first stop on a tourism trail stretching from southwest Arkansas to Nashville, Tenn., organizers said.

The proposed visitors center in Kingsland, located 30 miles southwest of Pine Bluff in Cleveland County, will feature portions of Cash's personal history that have not been documented in other museums, said Brit Talent, a spokesman for the group Kickstart Cleveland County, which is spearheading the project.

"Everyone’s heard of Johnny Cash the singer, but we want to focus on the person, his relationship to family and his interaction with local people," he said.

Born J.R. Cash in 1932, the country music legend began his life in Kingsland, a community of about 400 people, until moving to Dyess in northeast Arkansas three years later. Throughout his life, Cash returned to Kingsland to hunt, fish and visit family, Talent said.

Although the home where he was born burned shortly after the move, the museum will showcase photographs, memorabilia and oral histories from relatives who still live in the town.

Organizers also proposed a GPS-guided tour of local places that Cash visited or wrote about in his music, such as the Kingsland railroad line mentioned in the song "Ridin' the Cotton Belt." Another possible destination could include a house where Cash and Elvis Presley are reported to have stopped as they traveled from Tennessee to Louisiana.

Talent said that home belonged to Cash's aunt, who made biscuits for the musicians and wrapped them in a dish towel for the trip. The story goes that she made them stop and return the towel on their way home to Tennessee, he said.

Other stories and landmarks significant to the extended Cash family will help differentiate the Kingsland center from the Johnny Cash Boyhood Home in Dyess. Since opening in 2014, more than 40,000 tourists annually from all 50 states and 57 countries have visited the boyhood home, said Ruth Hawkins, executive director of Arkansas State University Heritage Sites, which oversees that Cash site.

An economic impact study predicted that at full capacity, the boyhood home and related tourism industries could pump nearly $10 million annually into the area economy, Hawkins said. Leveraging a similar asset to spur economic development in Kingsland is a strategy city leaders said they hope will work in Cleveland County.

“Kingsland was once a thriving community, and it’s fallen on hard times,” Talent said. "We’re trying to take a golden nugget and bring people to an area they wouldn't otherwise come to. This is an opportunity for Kingsland to make a comeback."

The hope is that the two independent sites will someday form the first leg of a Johnny Cash tourism trail that would include the visitors center in Kingsland, the boyhood home in Dyess, Sun Studio in Memphis and the Johnny Cash Museum in Nashville, Tenn.

"The visitors center is more of a focus on his early life and who he was growing up, while Dyess or Nashville is where you'd go if you want to learn about his later life," said Mark Peterson, a professor of community and economic development for the University of Arkansas Division of Agriculture’s Cooperative Extension Service. "They're all unique contributions to the legacy of Johnny Cash that do not compete, but complement each other."

The Kingsland center, which will feature additional Cleveland County icons like Alabama football coach Paul "Bear" Bryant, will be located in a former Centennial Bank building the city purchased last month for $20,000.

Renovators will remodel the bank building as well as the neighboring post office, where a classic photo of Cash and country artist Johnny Horton was taken during a visit to Kingsland. At the recommendation of ASU Heritage Sites, the exterior of the building will be restored to the way it looked at the time the photo was taken.

“It's going to be different from any other Johnny Cash-related museum anywhere,” Talent said. "It’s not going to happen overnight, but it’s got a lot of potential. It’s gaining traction, and we’re excited about that."