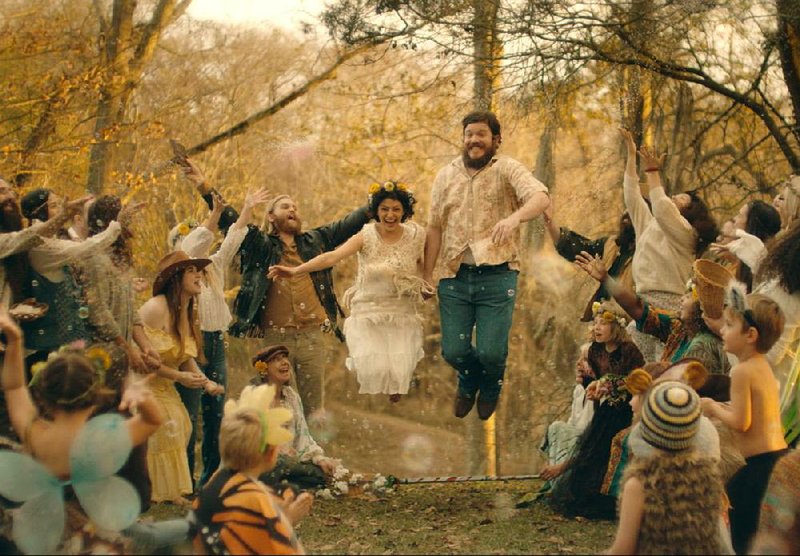 Blaze Foley (Ben Dickey) and Sybil Rosen (Alia Shawkat) jump the broom in this scene from Ethan Hawke’s Blaze, a story about what you have to give up to follow your dream.

The story of everyone's life is the same: You're born, stuff happens to you, and you die.

That's the reason most of what we've come to call bio-pics feel so familiar. You have the rise, the complication, the redemption -- as Leonard Cohen put it, "the minor fall, the major lift." The details and the keys change, and the real art is in the telling rather than the plotting. Which is why it's hard to make a really engaging bio-pic. While you can dress it up with metafiction tricks and embed flashbacks within flashbacks, in the end the greatest hits must be played. The fan must be serviced.

Rating: R, for language throughout, some sexual content and drug use

But Ethan Hawke's delicate Blaze isn't really a bio-pic; it's not really about Blaze Foley, although Foley (Little Rock native Ben Dickey) is a central character and you will find out a few things about the relatively obscure singer-songwriter by watching the movie. Blaze is really about what you might have to give up if you want to live as an artist -- if you're compelled to live as an artist. Blaze is a movie about the meager recompense of living the authentic life: like a knight, like a monk.

Foley was born Michael David Fuller in Malvern in 1949, and he died penniless after being shot by the son of an elderly friend in Austin, Texas, in 1989. In between, he wrote and sang a lot of songs, slept in dumpsters and under pool tables, disappointed some people, and annoyed others. He walked with a limp from a childhood bout with polio and needed medication to keep his brain from jumping out his skull. He had a bad childhood (alluded to in a scene with Kris Kristofferson).

He met Sybil Rosen (Alia Shawkat), an actress and playwright, when he was living in an artists' colony in Carroll County, Ga., in the mid-1970s. That might have been the best luck he ever had. (Rosen's memoir, Living in the Woods in a Tree, serves as the basis for the movie, which Rosen wrote with Hawke. She plays her own mother in the film.)

Rosen believed in Foley and they set out on the road so he could attempt a career; from Atlanta to Chicago to Houston and finally to Austin, where he was more or less embraced by the unremunerative but otherwise vital singer-songwriter community where he lost his muse just as he was hooking up with Townes Van Zandt (Charlie Sexton), the legendary singer-songwriter descended from Texas royalty (Van Zandt County was named for an ancestor) who would become his mentor, substance abuse buddy and role model.

Allow me a minute to talk about Sexton, who I've known about since the early 1980s, before, as a 16-year-old, he signed a major label deal and had the David Bowie-esque hit record "Beat's So Lonely." Tom Ayres, an old studio hand who'd retired to north Louisiana -- and lived a couple of miles from where Dickey lives today -- told me that Sexton, who as a 12-year-old had gigged with Joe Ely and other Texas luminaries, was being groomed by his label, MCA, to "be the next Elvis."

"That boy will be bigger than all of them," said Ayres, who'd had a hand in signing Bowie to RCA Records in 1968 (for a while he'd been roommates with Bowie in a Hollywood mansion once owned by Lillian Gish).

Turns out that didn't happen for Sexton, who instead carved out a formidable career as a rootsy guitarist, often touring with Bob Dylan. While he's had small acting roles before, notably in Richard Linklater's Boyhood, where he met Hawke, his Van Zandt is a staggeringly affecting, beautifully realized portrayal of a deeply troubled genius. Sexton, cheekbony and drawn, looks enough like Van Zandt (and plays better) but it's not a performance based on mimicry or classic exactation. In Blaze, Sexton so becomes Van Zandt that we might worry he might hurt himself; when he plays the dirgey "Marie" (a bit of an anachronism, the song allegedly was written on Foley's guitar after his death), he almost convinces us that he's right when he argues that a song like that is worth the artist blowing off friends, family; any chance of peace and happiness.

Van Zandt is like one of Jean Genet's street saints -- he lives outside of convention, an authentic outlaw. And he pulls Blaze -- who maybe could have gone either way, who maybe could have struggled and achieved a modicum of normality with Sybil -- into his dark vortex.

Blaze could be deconstructed as a triumph of casting; Dickey, Shawkat and Sexton all seem born to play their characters. And Hawke knows how to make a film feel real. While the narrative is jumbled -- Blaze is like a box of photographs spilled on a floor and picked up in random order -- the control is strong.

Blaze Foley is bigger now than he ever was; you can see him on YouTube, download his songs. Most people who heard of him before this movie probably knew him from the Lucinda Williams song "Drunken Angel." Lucinda isn't in the movie but she was in Austin then, sharing an apartment with one of Blaze's post-Sybil girlfriends. Her old sideman Gurf Morlix is in the film, which aside from being shot in and around Baton Rouge and New Orleans feels so '80s Austin that those of us who were sometimes there might conflate it with the real thing. It was someone else, not Blaze Foley, I saw help a knee-walking Townes Van Zandt finish his set.

Sexton was there, in part, Dickey and Hawke both told me, to keep things "authentic," to make sure the music was presented as it would have been, that the clubs were seedy and half-filled, that the right things were honored. While it's easy to be cynical about things like this, Blaze seems to genuinely come from a place of love. It doesn't presume to know the answer to its central question: Do you have to blow off everything to not be a hack?

So does Ethan Hawke.