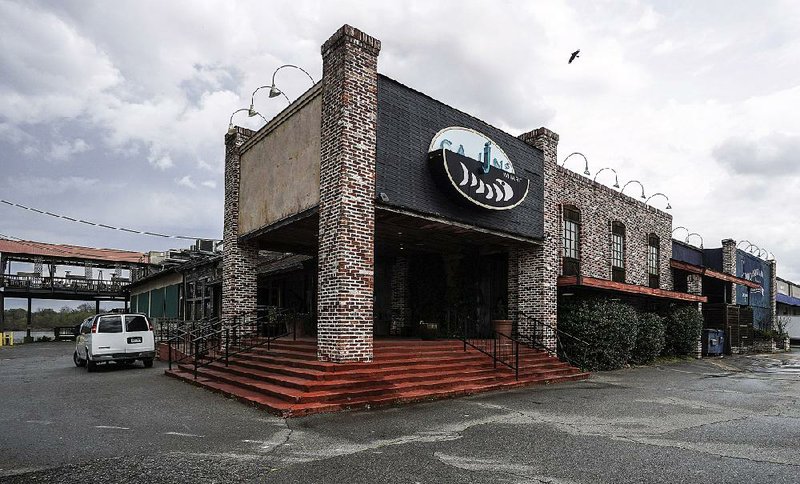 During its nearly 45 years in business, Cajun’s Wharf has often served as a destination restaurant for visitors to Little Rock.

The restaurant, at 2400 Cantrell Road, overlooking the Arkansas River, will be closing its doors after nearly 45 years. It opened in 1975 as Anderson's Cajun's Wharf.

Owner Mary Beth Ringgold said with her lease expiring June 30, and the enormous amount of maintenance and repair required to keep operating in a 45-year-old, 20,000-square-foot building, "although it's a painful and agonizing decision, it's the best business decision, based on the current climate.

"And though we've tried over the years to make it more casual, we're still thought of as 'special destination.' People come out on the weekends; we have crazy business on the weekends. But on weekdays it's hard to drive people in the door."

Ringgold also cited shifting consumer trends away from "destination dining" in general, and that while the restaurant is busy and crowded on weekends, "It's tough to operate a 20,000-square-foot business [just] on busy weekends.

"We've had a great ride, but I don't see the trends changing in the next five years."

Ringgold will continue to operate her two other Capers Group restaurants -- Capers on Cantrell Road in west Little Rock and Copper Grill on Third Street downtown.

Ringgold said she was notifying her employees about the planned closure on Sunday -- "It's not going to be an easy day," she added -- and that she would try to shift as many of them as possible into the two other restaurants and her catering operation.

Ringgold, a native of West Virginia, worked for Bruce Anderson for 13 years. "I actually started on the audit side of operations, as a part-time bookkeeper at Cajun's in Knoxville, Tenn., while I was in college," Ringgold said in a June 2016 interview in AY Magazine.

She transferred to the Cajun's in Little Rock in the early '80s and rose through the ranks into management. Anderson sold his restaurants in Little Rock; Knoxville and Nashville, Tenn.; Oklahoma City; and Denver in 1986. He died in 1992.

Mike Ward, Anderson's first general manager in Little Rock, had left to open Captain Bilbo's in Memphis, Ringgold said; "he came back in 1986 and bought it back from Bruce, and then a year later he made me a minority partner." That partnership group ran the restaurant until 1993, when they sold it to Landry's, a Houston-based chain, which occupied the building from 1993-99.

Meanwhile, Ringgold and some friends and business partners opened Capers in 1995. (Copper Grill opened in 2007.)

In 1999, as Landry's was collapsing, Ringgold and three partners bought the business back -- and brought back Cajun's, spending approximately $1 million to resurrect it, as closely as possible, to the way it had been.

That included the return of many of the original Cajun's artifacts, including paintings and French Quarter street signs; they also rebuilt the partitioned dining niches, private rooms and isolated tables that Landry's had taken out in favor of a large, open, more-family-friendly dining space.

"I think [Bruce Anderson] would be very proud of what we've done with the restaurant," Ringgold said in a November 1999 Arkansas Democrat-Gazette interview shortly after Cajun's reopened.

Cajun's, as it has pretty much always been known, featured a broad spectrum of live entertainment in the bar, including country, zydeco, rhythm and blues, jazz and contemporary music acts and even occasionally stand-up comedy. Other specialties include the Play-De-Doh, a signature rum punch served in a quart-size Mason jar, and a menu that, while for years had not been Cajun per se, was for a long time one of the very few central Arkansas options for fresh seafood.

And Cajun's was perennially a major magnet for out-of-town diners.

"It got to be that when you got on an airplane and asked a stewardess or the person sitting next to you where would they eat in Little Rock, they would say 'Cajun's Wharf,' " Ringgold said in the November 1999 interview.

"I don't know that I can put a dollar amount on it," said Gretchen Hall, president and chief executive officer of the Little Rock Convention & Visitors Bureau. "But it was one of a handful of true destination restaurants. It was one of the best live entertainment options in the city; also just capacity-wise, it's absolutely our largest restaurant. It will certainly be a loss. It's been a staple for so long; I'm sad to see it go."

The June 1 closing date gives the staff nearly a month to get the place ready to hand over to the landlord. Ringgold said she doesn't know whether there is another tenant pending to take the place over.

Ringgold said there is at least one positive: "I'll now have the opportunity to spend more time in the other two restaurants, because this took up so much of my time."