Won’t be nice for much longer, president tweets by Compiled by Democrat-Gazette staff from wire reports | April 1, 2019 at 4:30 a.m. 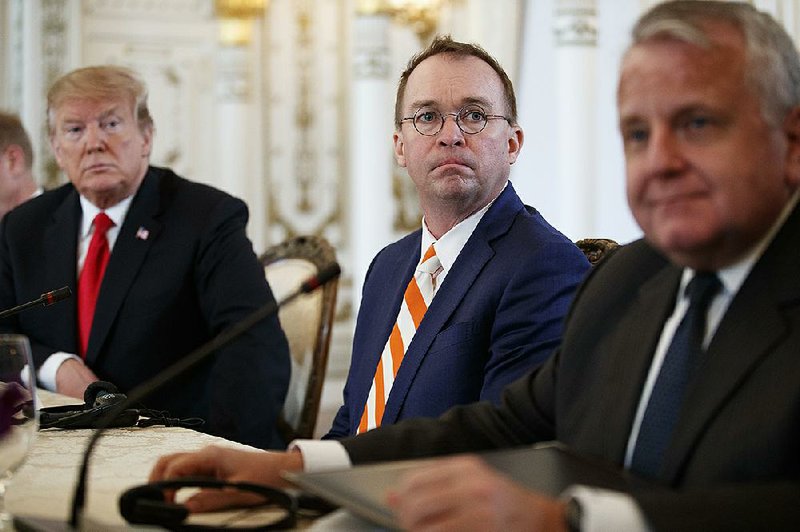 WASHINGTON -- President Donald Trump tweeted Sunday that the Department of Homeland Security would stop being "sooo very nice" along the U.S.-Mexico border, hours after a White House counselor said Trump's threat to close the border this week "certainly isn't a bluff."

The president, in a Sunday post on Twitter, blamed Democrats for what he said was "allowing a ridiculous asylum system and major loopholes to remain as a mainstay of our immigration system.

"Mexico is likewise doing NOTHING, a very bad combination for our Country," Trump added. "Homeland Security is being sooo very nice, but not for long!"

Mick Mulvaney, the director of the Office of Management and Budget, said Sunday that it would take "something dramatic" to persuade Trump not to close the border, and that the administration still intends to cut off hundreds of millions of dollars in assistance to Guatemala, Honduras and El Salvador, the primary sources of tens of thousands of migrants seeking political asylum in the U.S.

"Why are we talking about closing the border?" Mulvaney, who is also the acting White House chief of staff, said in an interview on ABC's This Week. "Because, not for spite, and not to try and undo what's happening, but simply to say, 'Look, we need the people from the ports of entry to go out and patrol in the desert where we don't have any wall.'"

In February, 76,000 migrants were apprehended crossing the border -- an 11-year high.

"We hate to say we told you so, but we told you so," Mulvaney said. "We need border security, and we're going to do the best we can with what we have. The Democrats will not give us any additional money to do this, they won't give us any additional people, and importantly, they will not change the law that is acting as this giant magnet for people from South and Central America to come into this country."

When host Chris Wallace asked if Trump was serious about a border closing that could harm the U.S. economy, Conway replied, "It certainly isn't a bluff. You can take the president seriously."

Conway said the U.S. had "never seen a surge like this coming from the Northern Triangle," referring to Guatemala, Honduras and El Salvador, and she added that "Congress can fix this in an hour."

Conway pushed back against critics who say that cutting those countries' aid -- some of which goes to programs to curb gang violence -- would make matters worse.

"The conditions are already awful," she said, adding, "We are over the melting point. The executive branch has done so much to try to mitigate these awful circumstances, and we need to send a message back to these countries, too."

Closing the border would have immediate consequences not only for families seeking asylum but also for trade and commerce between the United States and Mexico.

Sealing the border would disrupt supply chains for major U.S. automakers, trigger swift price increases for grocery shoppers and invite lawsuits against the federal government, according to trade specialists and business executives.

"It's unworkable and unrealistic, and I don't think he could really do it," Rufus Yerxa, president of the National Foreign Trade Council, which represents multinational corporations, said Sunday.

Lance Jungmeyer, president of the Fresh Produce Association of the Americas in Nogales, Ariz., agreed.

"First, you'd see prices rise incredibly fast. Then ... we would see layoffs within a day or two," Jungmeyer said. "This is not going to help border security."

At this time of year, Jungmeyer said, trucks travel to Mexico to collect watermelons and table grapes. Once full, they head for the United States, drop their cargo at warehouses and return to Mexico for another load.

Eliminating one workday a week at a port that handled 337,179 trucks last year would disrupt that carefully calibrated schedule.

"It messes up harvests," Jungmeyer said. "It messes up your ability to service customers on the U.S. side of the border."

"The first question would be: Where do you put it?" said William Reinsch, a former Commerce Department official. "Stuff is going to stack up at the border because it's already on the way there."

Arturo Sarukhan, Mexico's ambassador to the United States from 2007 to 2013, said farm states would be among the casualties of a border closure, which he called a "self-inflicted wound."

"I'm not going to try to second-guess whether the president is playing chicken, bluffing or spewing whatever comes to his mind," Sarukhan said Sunday. "The reality is that it would be extremely costly for the United States in terms of trade and economic well-being."

Leaders of the three Northern Triangle countries have said they are committed to solving the problem of migrant caravans.

In 2017, the United States gave $420 million to Central American countries struggling with violence. According to the U.S. Global Leadership Coalition, a nonprofit organization that supports diplomatic efforts of the United States, the Northern Triangle countries committed about 10 times that amount, or $5.4 billion, to improve conditions.

"American aid to Central America is not charity, but an investment in our national security," Liz Schrayer, president of the coalition, said in a statement. "The idea of suspending the relatively small, but essential foreign assistance to the region will only exacerbate the root causes driving people to flee their homes -- brutal violence, hunger and instability."

Current and former members of the Trump administration have supported Central American aid as part of the solution for the U.S.-Mexico border. In May 2017, former Chief of Staff John Kelly said during an Atlantic Council meeting that his experience as the top officer of the military's Southern Command showed him that partnering with Northern Triangle countries was crucial for securing the border.

"If we can improve the conditions -- the lot of life of Hondurans, Guatemalans, Central Americans -- we can do an awful lot to protect the southwest border," said Kelly, then speaking in his capacity as homeland security secretary.

On CNN's State of the Union, when host Jake Tapper noted that members of the president's administration have said aid money has helped curb violence and migration, Mulvaney dismissed it as data from "career staffers."

Mulvaney called on the Mexican government to solidify its own southern border and for other countries to curb migration.

"Mexico could help us do it. They need to do a little bit more," Mulvaney said. "Honduras could do more. Nicaragua could do more. El Salvador could do more. And if we're going to give these countries hundreds of millions of dollars, we would like them to do more."

"If it's working so well," Mulvaney added, "why are the people still coming?"