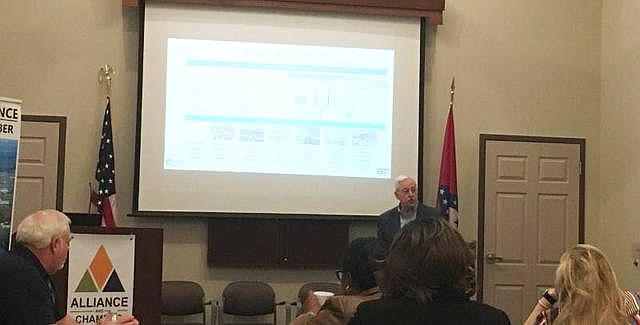 A good crowd of members, along with several guests, attended the March 20 meeting of the Jefferson County Manufacturing Council (JCMC) held at the Economic Development Alliance.

Although it was spring break and a few members were out of town, the scheduled program may have contributed to attendance. Many were there to hear an update on the $3.5 billion gas-to-liquid (GTL) processing facility to be built in northern Jefferson County by Energy Security Partners (ESP).

ESP’s Arkansas project is now more commonly identified by its operating company name, GTL Americas (GTLA), according to Ken Roberts, who was guest speaker. In introducing himself, Roberts said he came on board the project about four months ago as GTL Americas’ senior vice president for commercial, planning, investor relations and administration.

Roberts then briefly shared highlights of his lengthy career in the oil and gas business, including 22 years in the GTL industry, most recently in Oklahoma City. Noting experience with small demonstration-type projects, he expressed excitement in getting to work on this massive commercial GTL project, one he called world-scale. And the first of its size to be built in North America.

Roberts said the well-established (and almost century old) technology to be used here to produce quality, clean diesel from natural gas was originally developed in the 1920s in Germany and the process known as Fischer-Tropsch was used to convert coal to liquid fuels during World War II.

It was later perfected commercially on a large scale, using coal and natural gas, in South Africa beginning in the 1950s. Since then, some of the coal-to-liquids (CTL) facilities in South Africa have been converted to GTL service, and ever-larger GTL facilities have been developed in locations rich in natural gas reserves — one in Malaysia, one in Nigeria, two in Qatar, and one currently under construction in Uzbekistan.

He added that one reason the Jefferson County site was selected was because of its proximity to major natural gas pipelines, among other assets.

“This is the best site I’ve seen in my career,” Roberts told the JCMC group, noting that it now encompasses about 1,700 leased or purchased acres.

“In addition to the availability of natural gas,” he explained, “there’s the site-bordering UP railroad, interstate highway and Arkansas River, plus a very supportive community. The stars are truly aligning at this location,” he said.

Roberts said GTLA is already contacting area training programs, colleges and universities to make sure the available workforce will have the needed degrees and technical skills that can be recruited for this project.

Some information Roberts mentioned has been reported previously or is available on ESP’s website. The main difference this day was hearing how the project is moving forward. Permit applications have been submitted to governmental agencies. Two “strong” engineering teams are at work on front-end engineering design. Major international investors are being secured. And the timeline for expected construction start is getting closer every day. This is 2019, after all.