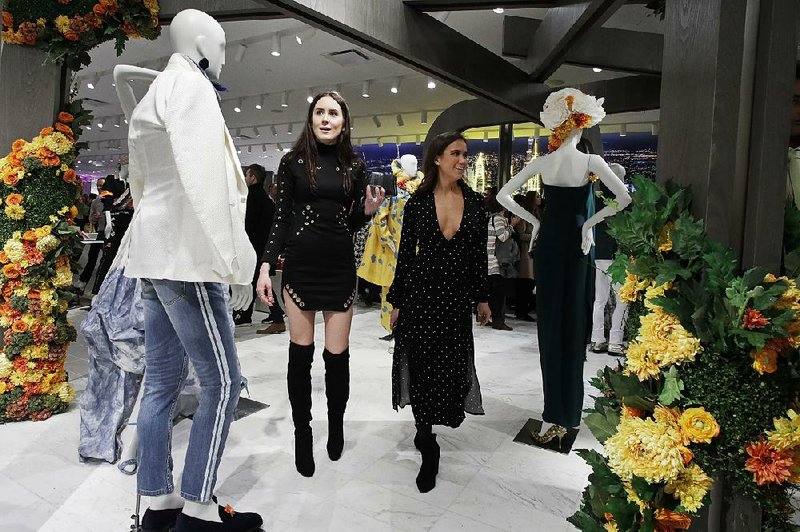 WASHINGTON -- U.S. retail sales fell in February, as consumers pulled back their spending on building materials, groceries, furniture, electronics and clothing amid signs of a slowing economy.

The Commerce Department said Monday that retail sales fell 0.2 percent in February, after posting an upwardly revised 0.7 percent gain in January. Still, sales are running below their seasonally adjusted levels from November after a sharp 1.6 percent decline in December.

Over the past year, retail sales have roughly kept pace with inflation by increasing 2.2 percent.

The recent dip in consumer spending suggests that more Americans are tightening their belts amid slowing global growth and waning effects of President Donald Trump's tax cuts at the end of 2017. Roughly 70 percent of all economic activity comes from consumers, so a slump in retail sales would have a ripple effect. Even so, rising wages, a stock-market rally and steady interest rates are likely to support consumption in coming months.

The end of the government shutdown on Jan. 25 failed to increase spending much, and the initial round of tax data for February showed taxpayers were getting lower average refunds than in 2018.

"A couple of special factors -- snowstorms and less income tax refunds -- may have weighed on spending, though it's disappointing that consumers did not extend January's rebound despite the end of the government shutdown," said Sal Guatieri, senior economist at BMO Capital Markets.

The data likely won't change the expectations of Federal Reserve policymakers for no interest-rate increases this year amid muted inflation. Officials have generally seen the economy as in good shape, and Fed Vice Chairman for Supervision Randal Quarles said Friday that the "sharp falloff" in retail sales in December was inconsistent with other indicators. Some economists and analysts have echoed that sentiment.

White House chief economic adviser Larry Kudlow said Friday that the "underlying economy" isn't slowing. Still, he called for the Fed to cut interest rates by a half percentage point.

"The question that everybody's got with a lot of this data is: Are we going through a soft patch or is this the start of a more serious retrenchment in consumer spending? And we keep getting mixed signals in that regard," said Tim Quinlan, a senior economist at Wells Fargo & Co. in Charlotte, N.C.

The February retail figures were delayed more than two weeks by the government shutdown.

Other recent indicators have offered a mixed picture of the U.S. economy. Data on February durable-goods orders, due today, and Friday's employment report for March will give a better sense of whether the weakness will be temporary.

Information for this article was contributed by Josh Boak of The Associated Press; and by Jeff Kearns, Reade Pickert, Katia Dmitrieva and Jordan Yadoo of Bloomberg News.