Bill to cloak execution-drug suppliers moves to Hutchinson for signature by John Moritz | April 4, 2019 at 4:30 a.m. 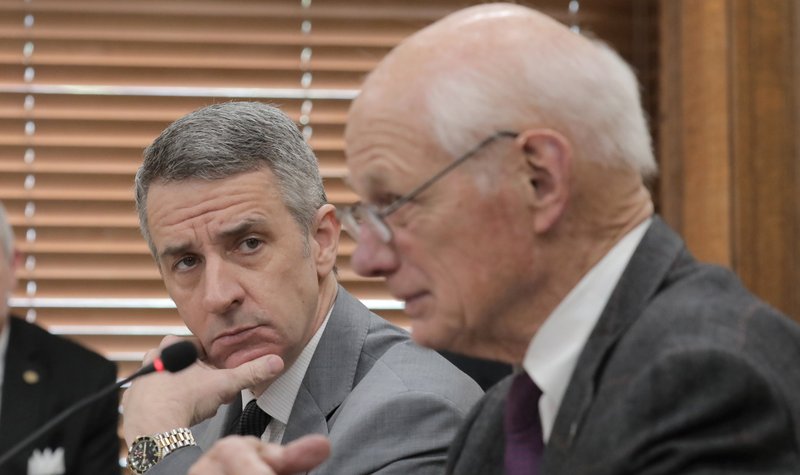 Gov. Asa Hutchinson said Wednesday that it was "undetermined" when the state would resume carrying out executions, even as the House completed passage of the second of two bills intended to clear the way for lethal injections.

House lawmakers Wednesday afternoon passed Senate Bill 464 along a mostly party-line vote, sending the bill to the governor, who said he will sign it.

The legislation will allow the Arkansas Department of Correction to keep secret nearly all records related to its supply of lethal injection drugs, including any records that could possibly identify the companies that manufactured the drugs.

The bill would also make it a felony to "recklessly disclose" any records or the identities of execution drugmakers.

Drugmakers, most of which are publicly opposed to the use of their products in executions, have in the past taken legal action against state prison officials, accusing them of skirting company standards to acquire drugs from third-party suppliers.

Faced with crackdowns on the supply chains from large pharmaceutical companies, prison officials have said they are currently unable to acquire any of the three drugs that the state uses in lethal injections.

"Death penalty opponents have engaged in what I would call nefarious tactics to try and stop the use of the death penalty in the state of Arkansas," said state Rep. John Maddox, R-Mena, the sponsor Senate Bill 464. "This legislation is the most efficient way to get this process back on track."

Hutchinson said that, with the passage of SB464 along with an earlier bill that changed the way prison officials determine the competency of condemned inmates, the state will once again be able to conduct executions.

"Both those bills will set the stage for it, but as to the timelines in the future, that is undetermined," Hutchinson told reporters Wednesday.

The bill was drafted in consultation with Attorney General Leslie Rutledge's office and was part of her legislative package. Rutledge, along with the governor, has the duty to begin the process of imposing a sentence of death.

"Our role is to make sure the law is in place, so that way what we don't have happen is the Supreme Court throw it back out and we start the process all over again," Rutledge said. "These families and victims need closure, and they need justice carried out."

There are 30 men on Death Row in Arkansas. However, various legal appeals and other points of litigation are blocking executions for all but one man, Don Davis, according to Rutledge's office.

The first step for the state to resume any executions will be the acquisition of new drugs for lethal injection.

Opponents of the legislation, which include Democrats, criminal attorneys and pharmaceutical companies, have said that the bill shreds transparency surrounding the imposition of the death penalty and the acquisition of drugs.

The Catholic Diocese of Little Rock has also opposed the bill. Three House Republicans who voted "present" on Wednesday are Catholic.

"This bill, I will say, is a transparency bill," said state Rep. Vivian Flowers, D- Pine Bluff. "We have laws in place right now as a part of our procurement process to ensure that when state government dollars go to pay for a thing, that we know what it's paying for, who the money is going to, that's a part of transparency."

Addressing concerns about transparency on Wednesday, Maddox said that the law already sets out what drugs may be used in executions.

Arkansas currently uses a three-drug protocol for executions. Midazolam, a sedative, puts the prisoner under, followed by injections of the paralytic vecuronium bromide and a heart-stopping dose of potassium chloride. The Department of Correction does not have any of those three drugs available for executions, a spokesman said Wednesday.

State law also allows for execution by a single, lethal dose of a barbiturate. Solomon Graves, a spokesman for the Department of Correction, said Wednesday that the department has no plans to change its method away from the three-drug protocol.

Graves could not say when the department planned to resume its search for execution drugs.