USDA reducing its look at pork 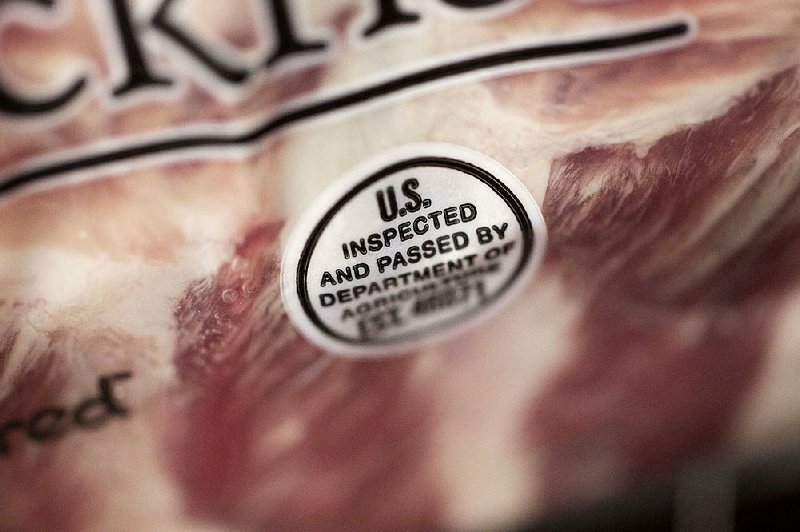 A U.S. Department of Agriculture inspection stamp is displayed recently on a package of baby back pork ribs at a supermarket in Princeton, Ill.

WASHINGTON -- President Donald Trump's administration plans to shift much of the power and responsibility for food safety inspections in hog plants to the pork industry as early as May, cutting the number of federal inspectors by about 40 percent and replacing them with plant employees.

Under the proposed new inspection system, the responsibility for identifying diseased and contaminated pork would be shared with plant employees, whose training would be at the discretion of plant owners. There would be no limits on slaughter-line speeds.

The Trump administration also is working to shift inspection of beef to plant owners. USDA officials are scheduled next month to discuss the proposed changes with the meat industry.

USDA officials confirmed they have no plans under the new system to test for salmonella -- for which USDA once tested. The agency will rely heavily on pathogen testing by plant owners, but those results will not have to be publicly disclosed. The hog plants also will no longer be required to test for E. coli, records show.

These proposals, part of the Trump administration's broader effort to reduce regulations, come as the federal government is under fire for delegating some of its aircraft safety oversight responsibilities to Boeing, which developed the 737 Max jets involved in two fatal crashes over the past six months. FAA certification of the two aircraft involved in the crashes took place under Trump, but the major shift toward delegating key aspects of aviation oversight began during the George W. Bush administration.

Pat Basu, the chief veterinarian with the USDA's Food Safety and Inspection Service from 2016 to 2018, refused to sign off on the new pork system because of concerns about safety for both consumers and livestock. The USDA sent the proposed regulations to the Federal Register about a week after Basu left, and they were published less than a month later, according to records and interviews.

USDA officials declined interview requests, saying they would not speak publicly about the new regulations until they are final.

Basu's top concern is with giving plant workers the responsibility for identifying and removing live diseased hogs when they arrive at the plants. He said that job should remain with trained USDA veterinarians so they can identify contagious diseases like foot and mouth disease, which can maim and destroy livestock, creating profound effects on the economy.

The National Pork Producers Council, the association for the $20 billion pork industry, said the new system will create a more symbiotic relationship with USDA workers who will "partner with the pork industry to better ensure safe products are entering the marketplace," according to an issues paper the trade group distributed on Capitol Hill.

"More emphasis will be placed on preventing contamination rather than reacting to it afterwards," said William James, the head veterinarian in the USDA's Food Safety and Inspection Service from 2008 to 2011, who helped develop the regulations.

"These [inspection] systems have evolved since the '80s, and they will continue to do so," he said. "We cannot do things the same ways we've always done them."

Joseph Ferguson is a former USDA hog inspector who retired in 2015 after working 23 years under the traditional inspection system as well as with a trial program that created the new proposed system. He said federal regulators lost control when plant workers supplanted them. Hog carcasses whizzed by him and the plant-paid inspectors at speeds so fast that fecal contamination -- an important indicator for E. coli and salmonella -- could not be detected.

"All the power gets handed over to the plant," Ferguson said. "I saw the alleged inspections that were performed by plant workers; they weren't inspections. They were supposed to meet or exceed USDA standards -- I never saw that happen."

The proposed hog slaughter rule is based on a study that began 20 years ago, ultimately including five large plants. Efforts to expand the program have sputtered under past administrations, but Trump administration officials have told industry trade groups that they expect the proposed regulations to soon become final. They say 40 of the 612 hog plants not already using the new system will begin using the program. Collectively, agriculture officials say, these plants will produce 90 percent of the pork produced in the United States.

An analysis by the USDA of 35 of the 40 plants estimated that the number of federal inspectors would shrink from 365 to 218. That same analysis estimated that the new system will save $6 million annually and that large plants -- by increasing their line speeds by more than 12 percent -- will increase their profits annually by more than $2 million dollars. The current cap on line speed is 1,106 hogs per hour or 18 hogs per minute.