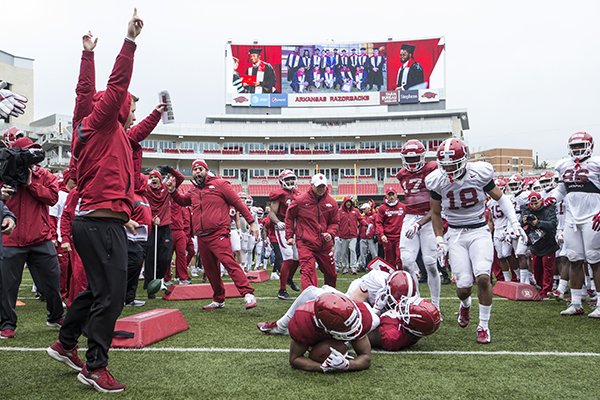 FAYETTEVILLE -- If Coach Chad Morris' most pressing wish for the University of Arkansas football team this spring could be distilled into a two-word message it would probably read, "Get tough."

The Razorbacks got pushed around by their SEC brethren at times last season on both sides of the ball, and Morris doesn't want that to continue this fall.

He and his on-field staff, as well as the strength and conditioning coaches, set up competitions for essentially every facet of football preparation throughout this winter and spring, including another strong "attack" drill session in spring practice No. 13 Thursday.

"It's a mindset is what it is," Morris said. "It's a mental and physical toughness that we've got to have and we've got to be better at as a staff, as a team, from a strength staff. I mean everybody. The whole program."

Former Arkansas assistant coach Johnny Majors, in town for the letterman's weekend that pairs with the annual Red-White game, was curious enough about the drill that he stepped from the end zone on the grass field to get a better look Thursday. Majors, who was wearing a 1964 Arkansas national championship team wind breaker, led Pittsburgh to the national championship with Tony Dorsett in 1976 and finished his head coaching career at Tennessee in 1992.

Majors addressed the team after the scrimmage, which wound up with the defense re-claiming the championship belt, based on the final play of the day.

"We got it back today so they got to baby sit it for a day," defensive tackle McTelvin Agim said, referencing the offense's lone day with the belt this spring came on Tuesday.

Quarterback Ben Hicks said the playing for the belt has been fun, but perhaps blown out of proportion.

'It's created a little drama between everybody, so it's been fun," Hicks said. "Coach Morris has always kind of been one of those guys that uses things to motivate guys. I think it works, I really do."

Asked which side of the ball would win the belt if the units had to wrestle for it, Hicks said, "It would definitely be the offense because we're so tired of hearing about the dang belt."

Safety Joe Foucha said the belt was won Thursday by holding Hicks to a short gain on a scramble play.

Foucha said the increased drill work and other competition have served to toughen up the players.

"Each week has gotten more physical," Foucha said. "We're in the toughest conference, so we have got to be physical. So each week we do a different drill to be physical and it has worked out very much."

Tight end Blake Kern had one of the best attack drill performances, battling through position mates Grayson Gunter, Blake Johnson and Trey Purifoy to reach the winning blocking dummy. The first drill featured linebacker Deon Edwards, who gave Bumper Pool, Grant Morgan and Andrew Parker a great effort before coming up inches shy. His tie-up with Morgan was a strong one.

The attack drill and winning the championship belt are two of the more overt representations of pushing the toughness angle.

"We've tried to incorporate drill work, and obviously competing for the belt has helped," Morris said. "I think that's been a huge thing for us. ... I think it's helped this football team, but again, we're not where we need to be, but we're getting a lot better."

Agim said the attack drill, in which linemen do not participate, is engaging.

"It gets your blood flowing for sure, just seeing those boys go at it," he said. "It makes you eager and ready to go out there.

"I feel like every position has gotten more physical, especially on defense because it's required up front for sure. I feel like they've been getting physical as well on the offensive side."

Hicks noted the increased head-to-head battles as a means of increasing competition between the units.

"I think as much live work as we've done all spring, I think it's helped both sides of the ball get tougher," Hicks said. "You add the drills that he's been doing at the beginning of practice and I think that's helped this team grow and just become tougher. It's been a good spring."

In the final practice before the Red-White game, the Razorbacks had a few notable personnel moves.

Tight end Cheyenne O'Grady, who has had a lower back issue, was not in attendance, so the team's top returning pass catcher is not likely to play Saturday.

Running back Devwah Whaley and tight end Chase Harrell returned to practice with green (limited contact) jerseys, putting their availability for the spring game into question. Neither player was on the practice field Tuesday during the early periods of practice open to the media.

Nickel back D'Vone McClure, who missed Saturday's scrimmage while in concussion protocol, was back in his white No. 36 jersey on Thursday. His status for the Red-White game is not known. Reserve quarterback Daulton Hyatt, who missed Tuesday's work with the flu, also returned to practice.

Morris said the heavy emphasis on toughness extends off the field.

"I don't want to hear excuses you know," he said. "Excuses take away from that mental and physical toughness that we're about."

The Red-White game is scheduled for 3 p.m. Saturday with a standard offense vs. defense format. The weather for the game should be better than the freezing precipitation the Razorbacks faced at War Memorial Stadium in Little Rock in Morris' first spring game last year, but there is a chance for storms in the forecast.