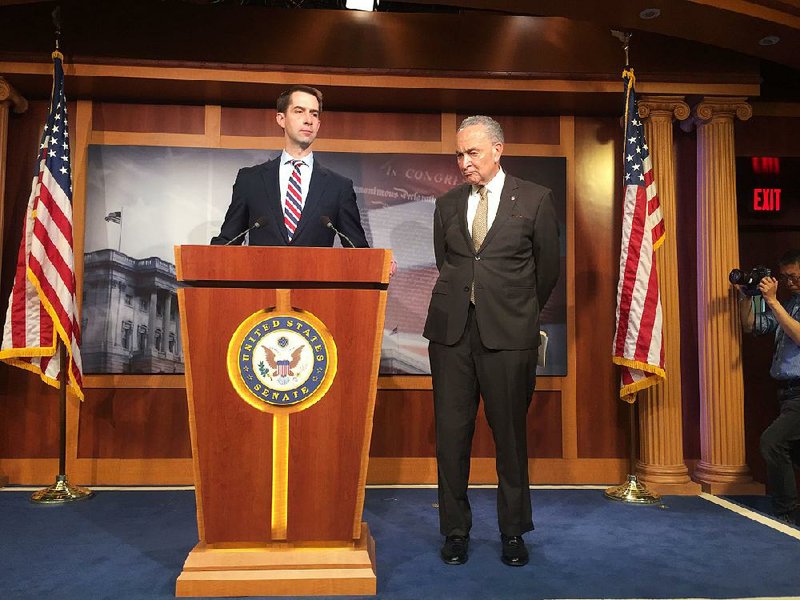 At a Capitol Hill news conference, they called for passage of the Fentanyl Sanctions Act, which would punish Chinese drug manufacturers and others when they knowingly supply fentanyl to drug traffickers.

The legislation, which was filed Thursday, is the "first ever legislation to give broad and powerful sanction tools to the administration to target illicit fentanyl producers in China, Mexico and throughout the world," Schumer said.

The announcement comes days after China said that it would treat all "fentanyl-related substances" as controlled narcotics, effective May 1.

"We're an unusual crew. Some might call us a motley crew who may not agree on a lot here in the United States Senate, but we do agree on one very important thing: combating the opioid epidemic," Schumer said. "When we can work together in a bipartisan fashion, we should. And when you see this group assembled, you know we're right."

Deaths in the U.S. from drug overdoses have soared in recent years. Between 1999 and 2006, they roughly doubled, from 16,849 to 34,425. They've risen every year since then. In 2017, overdoses were blamed for the deaths of 70,237 people in this country, according to the Centers for Disease Control and Prevention. Drugs claimed more lives that year than automobile accidents, homicides or suicides.

Opioids were a factor in 47,600 (67.8 percent) of those fatalities. Overall, 28,466 overdose deaths (40.5 percent) were linked to synthetic opioids other than methadone, the CDC reported.

Fentanyl is cheap and far stronger than many other drugs -- perhaps 100 times more potent than morphine, Cotton and others have said. It is often mixed in with other drugs, making them more potent and more deadly.

"Almost all of that fentanyl comes from Chinese super labs that is smuggled through Mexican cartels or even through our own postal system. China has long known this, and they've done no actions to stop it, and it's time to crack down," Cotton said.

The legislation would "direct the president to publicly identify foreign traffickers of opioids on an annual basis and use a number of precision economic and financial sanctions and policy tools to cripple their operations," according to a summary of the proposal.

"Color me skeptical that the Chinese government will uphold its end of its bargain, much like they don't uphold their end of almost any other bargain they strike with the United States or the civilized world," he said.

Last year, the lawmaker from Dardanelle introduced legislation that would have stiffened penalties for fentanyl trafficking.

At the time, he said fentanyl was "as much a weapon of mass destruction as it is a drug." A dose of fentanyl the size of a grain of sand can be deadly, he warned.

In May 2016, a group of 11 experts wrote to officials in President Barack Obama's administration urging them to designate the fentanyl crisis as a "public health emergency," The Washington Post reported last month. Experts later alleged that the Obama administration "did not take extraordinary measures to confront an extraordinary crisis," the paper said.

In October 2017, the Trump administration designated the opioid crisis as a "public health emergency."

Asked Thursday whether the government had dropped the ball by not acting more quickly, Schumer said, "I think not enough was done early on."

"I've been trying to fight the drug scourge in America for a long time. Crystal meth took a while. Crack cocaine took awhile. And this took too long. Too long. But that doesn't mean we shouldn't be redoubling our efforts now," he said.

Cotton said lawmakers may have realized fentanyl was a crisis before the people "who work full time in the government and live in Washington, D.C. "

"Congress has been leading on this, and I'm pleased that it's been a bipartisan effort," he said.