MOVIE REVIEW: Reimagined 'Shazam!' is a light-hearted adventure that doesn’t take itself too seriously 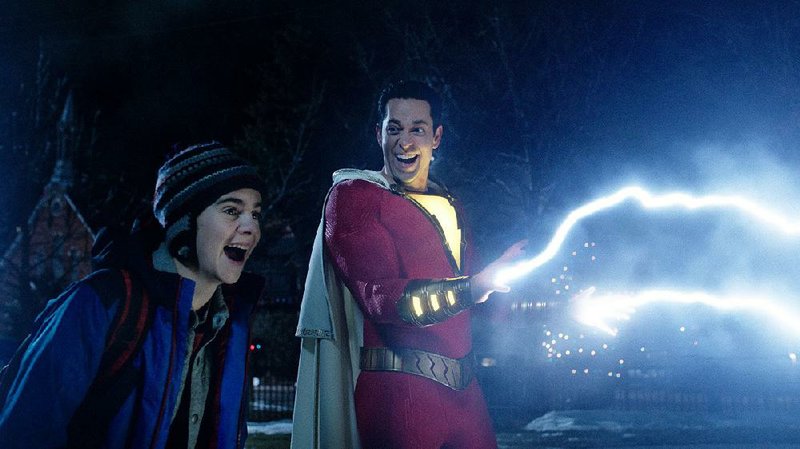 Ever since director Christopher Nolan started making Batman movies, it seems as if DC movie adaptations should come with a bottle of Prozac. While Nolan's films were as thrilling as they were dark, it was heartbreaking to see Superman with a mean streak and brooding even when he wasn't in his Fortress of Solitude.

With Shazam!, the folks at DC have finally figured out the one major secret to Marvel's success: While all of their movies have costumed protagonists, they aren't strictly bound to the genre. In some recent offerings, Marvel films have been political allegories or have revived the teen comedies that John Hughes (The Breakfast Club) used to make.

While screenwriter Henry Gayden may be adapting a character from Fawcett Comics, through much of the movie, he's cleverly updating Penny Marshall's Big. Asher Angel stars as Billy Batson, a 14-year-old who has been in and out of foster homes because he's frantically searching for his mother.

While his mother seems to have disappeared from the planet, his new foster home sticks him with a younger brother named Freddy Freeman (Jack Dylan Grazer), who walks with a crutch and seems just a little too obsessed with superheroes.

In the Shazam! comics I read as a kid, Billy turned into an adult both inside and out. (I sometimes wondered why he didn't just stay a superhero all the time because being an orphaned teen seemed like such a bummer.)

Gayden and director David F. Sandberg answer my question by making the super-powered version of Billy (Zachary Levi) a teenager trapped in an adult's body. When Billy summons the old wizard's powers, he might push a car out of the way to save a pedestrian, but he also realizes being a costumed adult is a great way to score his first beer. Levi effortlessly conveys adolescent confusion and youthful enthusiasm as he discovers which powers he actually has. Shazam didn't leave behind an owner's manual, so Billy finds out what he can do roughly when viewers do. 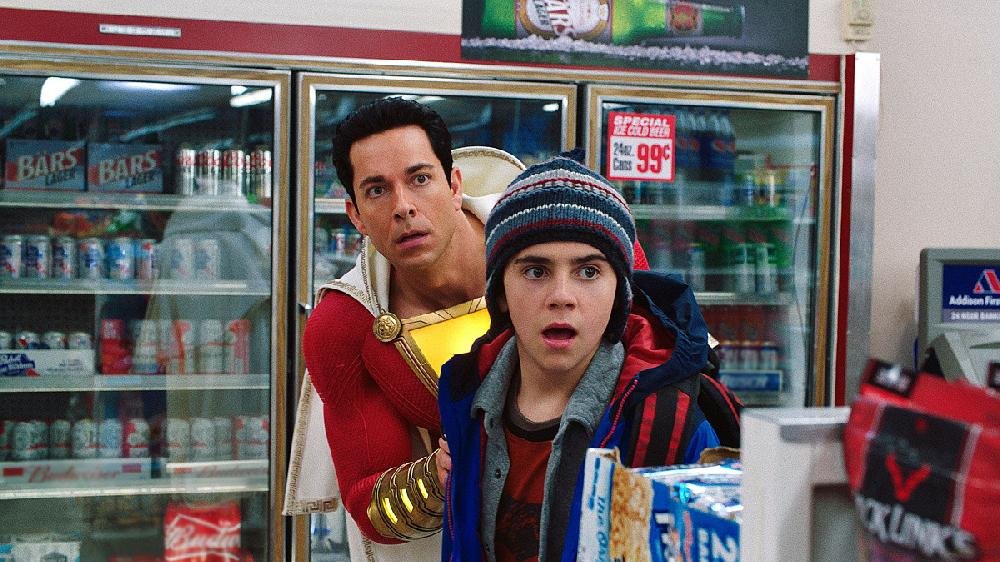 Freddy Freeman (Jack Dylan Grazer) and Shazam ( Zachary Levi) quickly figure out that one of the latter’s newly acquired super powers is the ability to buy beer in the latest superhero movie from the DC universe.

Freddy can be a bit of pest, but owning a bullet that once bounced off of Superman's chest (it comes with a certificate of authenticity) makes him an authority on being a super.

It's often side-splitting watching Grazer mentoring the older, more powerful but less mature Levi as he learns that showing off for tips isn't the best use for Shazam's gifts. It's refreshing to see a superhero who isn't a sullen automaton, and Levi projects just enough innocence so that viewers hope and pray he eventually gets a clue.

If he's not careful, Billy could end up like Dr. Thaddeus Sivana (Mark Strong), whom Shazam rejected because he wasn't pure of heart. Billy, who engages in petty theft and is callow even for his age, isn't pristine, either, but at least he wants to do something other than obtain supernatural gifts.

Dr. Sivana can hold his own against Billy, and he has the additional benefit of being able to summon monsters based on the seven deadly sins. Strong, who's an old hand at playing bad guys, is suitably intimidating, but his monsters look more like something from Castlevania than from gothic terror. Perhaps they're mad because they're looking for their home in a video game.

Gayden manages to redeem this and other letdowns by keeping the tone light. Billy, being an average teenage boy, laments that the gargoyle based on Vanity isn't as hot as she should be.

Sometimes it's best not to give superheroes exotic weaknesses. As Stan Lee discovered, they're more fun and engaging when their failings are like those of people who can't leap over tall buildings in a single bound.

Print Headline: MOVIE REVIEW: Reimagined 'Shazam!' is a light-hearted adventure that doesn’t take itself too seriously