RUNNING Hogeye Marathon shows no signs of slowing down 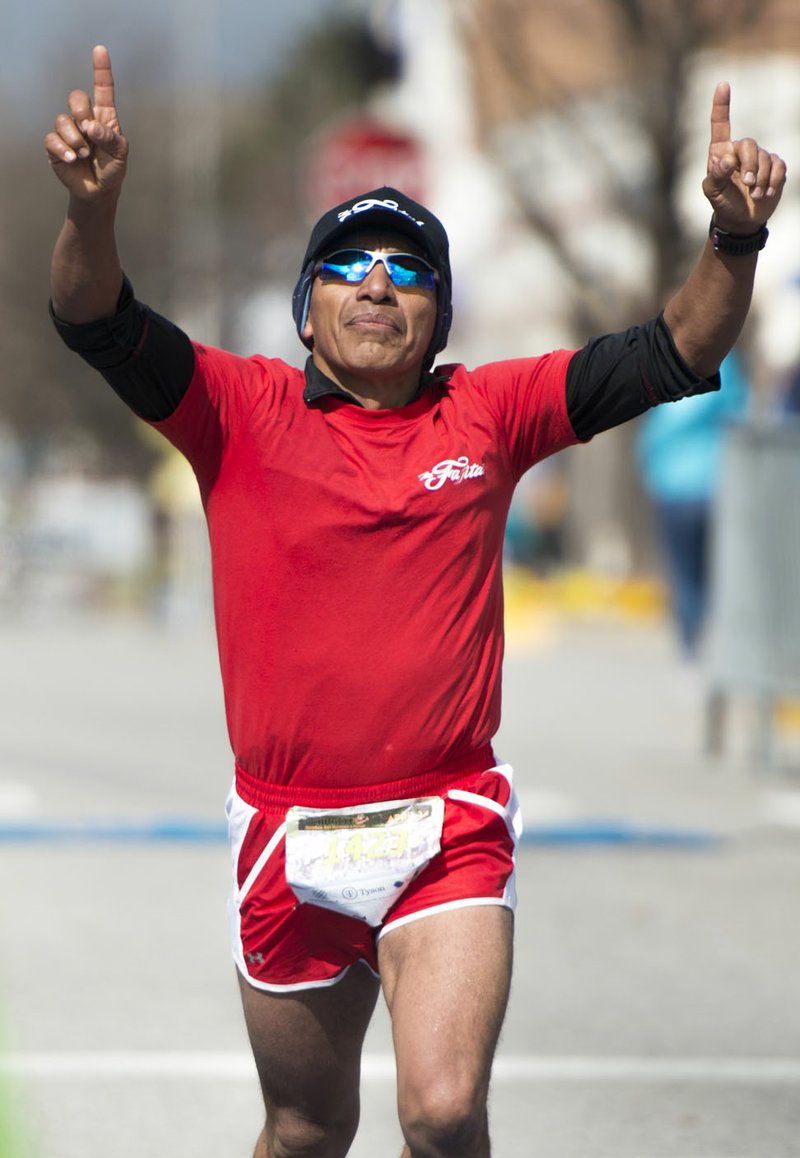 NWA Democrat-Gazette/CHARLIE KAIJO Pompilio Romero of Springdale crosses the finish line during the The 42nd annual Hogeye Marathon last year. A field of more than 2,000 runners are expected to take off today for the 43rd Hogeye Marathon from downtown Springdale.

The sound of rubber hitting the pavement will start early this morning as the 43rd Hogeye Marathon takes off from downtown Springdale.

A field of more than 2,000 runners is expected for this year's event, including one runner from South Africa, said race director Tabby Holmes.

The 26.1-mile marathon is the main event, but there are other races as well, including a 5K, half-marathon and a four-member relay. This will be the third year the Hogeye Marathon has started in Springdale after many years of being a Fayetteville-based event.

"The city of Springdale has really embraced the Hogeye," Holmes said. "They have a lot of police support. One of the things we like about having it in Springdale is that more of the course is on the city streets and runners like that because you don't get to run those streets any other time except for when there is a race."

The weather is expected to be mild for the race, unlike last year when temperatures were well below freezing when the race started. The cold did not affect the overall winner Jeff Kent who obliterated the field in 2 hours, 34 minutes, 19.46 seconds in a course record.

The first Hogeye Marathon was in 1977 when a small group of University of Arkansas professors decided to run from the university out to the small community of Hogeye and back.

"The rumor is 13 of them started it and only five finished it," Holmes said. "The next year they said let's try it again, and they called it the Hogeye Marathon."

A national running magazine at one time rated the old Hogeye course as one of the 10 toughest marathons in the country. Over time the course has changed a few times, including the move to Springdale three years ago.

Runners will start and finish on Emma Avenue, but the course will hit a number of spots including Lake Fayetteville, five city parks in Springdale and a run through the concourse at Arvest Ballpark. Shiloh Square on Emma will be the main gathering point for the event and will also be the site for the awards presentations.

The Hogeye is a Boston Marathon qualifying race, so the field will include a number of elite level racers trying to secure a spot for that, Holmes said.