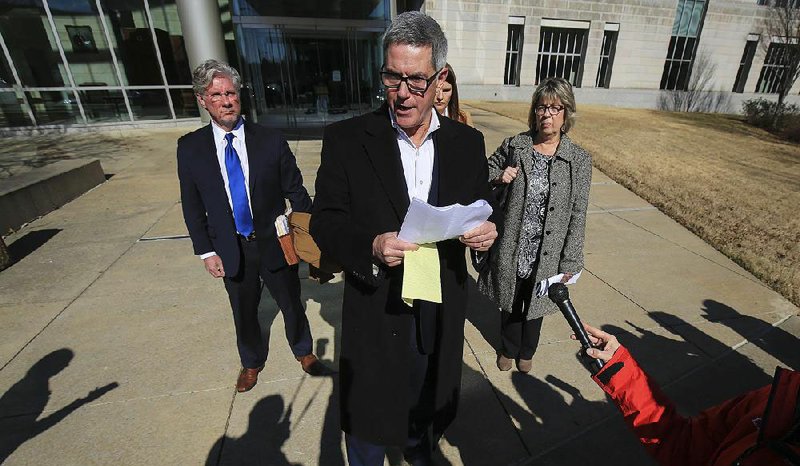 Gilbert Baker reads a statement on Jan. 24, 2019, outside the federal courthouse in Little Rock after he pleaded innocent to federal charges of bribery, wire fraud and conspiracy.

Gilbert Baker and Michael Maggio were friends, political allies and, prosecutors contend, conspirators in a bribery scheme aimed at enriching themselves and a nursing-home owner and campaign financier.

Five years after the alleged conspiracy came to light, Baker -- a former state senator, lobbyist and chairman of the Arkansas Republican Party -- is fighting a federal indictment that could land him in prison for the rest of his life. Maggio, a former judge, is serving the second year of a 10-year sentence in an eastern Kentucky penitentiary that's also home to a former acting boss of the Bonanno crime family, Vincent Basciano.

Already, the lingering scandal has cost Baker, 62, an executive position at the University of Central Arkansas and the hefty salary that went with it. He's no longer the successful political fundraiser or the high-profile anti-alcohol lobbyist he once was. In 2016, police arrested him for drunken driving. A toxicology report later showed he had tested positive for methamphetamine.

At 57, Maggio is federal inmate 28940-009, having begun a 10-year prison sentence in July 2017. Some believe he has begun cooperating with federal authorities in hopes of getting that sentence reduced.

[RELATED: A who's who in the Baker criminal investigation]

Maggio has changed his version of events that took place during his campaign for a seat on the Arkansas Court of Appeals at least three times. First, he denied the bribery allegations. Then in January 2015, he reached a plea agreement and admitted them in open court. Later, he said he was pressured into pleading guilty even though he was innocent. Finally and without explanation, he withdrew efforts challenging his conviction.

Arkansas Supreme Court Justice Rhonda Wood alluded to the changing narrative in January after the Baker indictment referred to her as Individual E but did not accuse her of wrongdoing.

"Certainly I understand why some see the Baker indictment as tenuous given the changing narrative of the principal player," she said.

HOW THE STORY BEGAN

The men's legal troubles began in March 2014 with an expose on a once little-known blog, Blue Hog Report. Headlines in other news outlets followed.

The story became one of campaign donations, text messages and political action committees, commonly known as PACs. It was a story intertwined with tragedy -- a woman's death in a nursing home after her cries of pain were answered with a suppository, a Tylenol, an antacid and an antidepressant prescription.

Two of Martha Bull's daughters sued. And the story became one of a multimillion-dollar award during political efforts to tighten lawsuit regulations in Arkansas, the nursing-home owner's campaign donations, a juror's change of heart and a judge's ill-timed slashing of a jury's damage award.

Bull had entered Greenbrier Nursing and Rehabilitation Center on March 28, 2008, for what she expected to be a 30-day rehabilitation after a mild stroke and an abdominal illness. On April 7, 2008, the twice-widowed mother of seven died at age 76. She was never taken to a hospital.

The facility is among roughly 30 such centers operated by Fort Smith businessman Michael Morton.

Morton, 68, has not been charged with a crime and, like Baker, denies wrongdoing.

"Coincidental" is how Morton described the timing of his 10 $3,000 checks made out to 10 PACs on July 8, 2013, the same day his lawyers asked Maggio to reverse or cut the Faulkner County jury's $5.2 million award to Bull's family. Maggio later got some but not all of the PAC money even though Morton has said he intended it for Maggio's campaign.

"Looking back at it now, with all the uproar about it, obviously, the appearance is absolutely horrible," Morton told the Arkansas Democrat-Gazette in March 2014.

Asked last week about a December article in the online publication Arkansas Money & Politics that said Morton "has been cleared of any wrongdoing," Morton said, "Believe me, it is not me saying that I am cleared because I don't know."

The federal prosecutors "don't ever tell you anything. They don't call me up and tell me what they're going or not going to do to me," Morton said.

As far as how long prosecutors can legally wait to file a case against him, Morton said, "I don't think they care. ... In their minds, it [the time limit] runs out when they say it runs out."

Morton and Baker also face civil litigation. In November 2014, attorney Thomas Buchanan filed a corruption lawsuit on behalf of Bull's daughters against Morton and Baker in Faulkner County Circuit Court. Maggio also was originally a defendant in this lawsuit but was removed from the case because of judicial immunity. Buchanan also represented the family in the earlier negligence lawsuit.

Buchanan said last week that he began investigating after he read the Blue Hog Report article and realized that Morton had largely financed the PACs, which in turn were mostly helping Maggio's campaign at the time.

"That's how I learned about it," Buchanan said. "Most people don't dig through campaign-finance reports and PAC reports and try to assemble any kind of paper trail."

In a June 2015 deposition taken by Buchanan, Baker testified that one of the trial jurors, Connie May, was his administrative assistant at the time and discussed the verdict with him the day after the trial ended.

A DAY OF BUSY PHONES

The jury rendered its verdict about 5:50 p.m. on May 16, 2013. That morning, federal authorities said, Baker had texted Maggio to say, "I have a LR lunch today with the nursing home folks. The topic will be judicial races. You are at the top of the list."

At 6:22 p.m., Maggio sent a text to Baker, though authorities have not released its contents.

At 6:33 p.m., Morton talked by phone with Baker for almost 7 minutes. In the deposition, Baker said Morton was cursing and "upset about the amount of the judgment."

After that call, Baker almost immediately texted Maggio, and Maggio texted him back minutes later, according to the Baker indictment, which did not divulge the content of the messages.

Baker told reporters after his arraignment that Maggio was among several people who had contacted him after the jury's verdict "because I was focused on lawsuit reform at that time. And some thought that, that was too large an award."

"I am writing this email to admit my very, uninformed and wrong decision and ask if there is anything I can do to right this wrong," DuVall wrote. "Surely, 12 people cannot really award 5.2 million dollars after deliberating a few hours. This is a process that should take longer, and/or have more instruction."

In the deposition, Baker recalled telling the state Ethics Commission it was hard to raise campaign funds for Maggio. The reason, Baker said, was Maggio's "weird personality."

In early July 2013, Baker hired attorney Chris Stewart to create eight of the 10 PACs to which Morton later donated. Baker also sent a fax asking Morton to donate $3,000 to each of the 10 PACs and suggested additional donations to the nonprofit Arkansans for Lawsuit Reform, Wood's 2014 campaign for the Arkansas Supreme Court, and Baker's employer, UCA.

Morton mailed the PAC checks in the same FedEx package as $48,000 in checks for Wood's campaign, $100,000 for the UCA Foundation and two $25,000 checks for the lawsuit-overhaul organization.

Among the calls and texts Baker made the day he got the package was a text to Wood at 5:24 p.m. She texted him back three minutes later. Authorities have not disclosed the texts' content.

In a 2016 court document, federal prosecutors said Morton's "money was funneled to Maggio's campaign through the use of PACs orchestrated by [Baker] and through straw donations."

The latter was a reference to contributions that came indirectly from the lawsuit organization that Morton had helped finance. A straw donor gives another person's money to a political cause but uses his own name in doing so, according to the Free Dictionary.

Morton, however, said last week that he wasn't the only person to donate to Arkansans for Lawsuit Reform.

Further, he said, "I was never consulted over how to spend one dime of that money."

Stewart has said Baker helped him get an $8,000 bonus from Arkansans for Lawsuit Reform in about November 2013. Stewart said it was his "understanding" that he would donate to Maggio's campaign from that bonus: Stewart, his wife Julie and his law firm gave $2,000 each to the campaign.

In about December 2013, Baker asked Individual C [Hawkins] to "'max out' to Maggio 'two three times,'" meaning he wanted Hawkins to make three donations of $2,000 each, the indictment says. Later that month, Hawkins' DBH Management Consultants, Hawkins Insurance Agency and Hawkins' wife Phyllis gave $2,000 each to Maggio's campaign, according to campaign finance records.

The checks that Morton sent to Baker in July 2013 arrived months before judicial campaigns could legally accept contributions. So, Baker said he held on to those for Wood's campaign until a fundraiser about Nov. 22, 2013. Before the event, Baker said he changed the checks' date from July 8, 2013, to Nov. 22, 2013, and gave them to a Wood campaign representative at the fundraiser.

In 2016, Wood said, "Had I known, I would have told him to return any checks received" too early.

On March 24, 2014, as publicity mounted over the Baker-tied PAC contributions, UCA returned Morton's $100,000 donation. Just over a week later, Baker resigned from his executive position at UCA and took an $82,000 pay cut to teach music.

Former Arkansas House Speaker Robbie Wills, a Conway Democrat who served in the Legislature with Baker, said he has known Baker more than 20 years. A highway interchange in Conway bears their names: the Baker Wills Parkway.

"Even though we were on opposite sides of the aisle, when it came to Faulkner County, we were always one of one accord to try to do everything we could to help our mutual constituents," Wills said.

Even if Maggio gets out of prison early, even if his conviction is someday overturned, his judicial career is over, for his troubles go beyond bribery.

There had been tax liens starting in 2001, an ethics-law violation from a 2008 campaign, and career-ending comments Maggio made online about women, black people, divorce, incest, homosexuals and bestiality. The once-anonymous comments, exposed in 2014, also included references to a legally confidential adoption case involving actress Charlize Theron and led to his withdrawal from the appeals court race.

In 2009, Maggio, whose docket included hot-check cases, addressed his own financial problems.

"A judge who puts on a robe is not a saint," he said. "They're people who have life experiences, bumps and bruises. They bring all that into a courtroom."

But the online postings magnified those "bumps and bruises." And on Sept. 11, 2014, the Arkansas Supreme Court ordered Maggio removed from the office from which he'd already been suspended and said he should never again hold a judicial post in Arkansas.