New biking law ready to roll out in Arkansas; change for cyclists affects use of stop signs, red lights 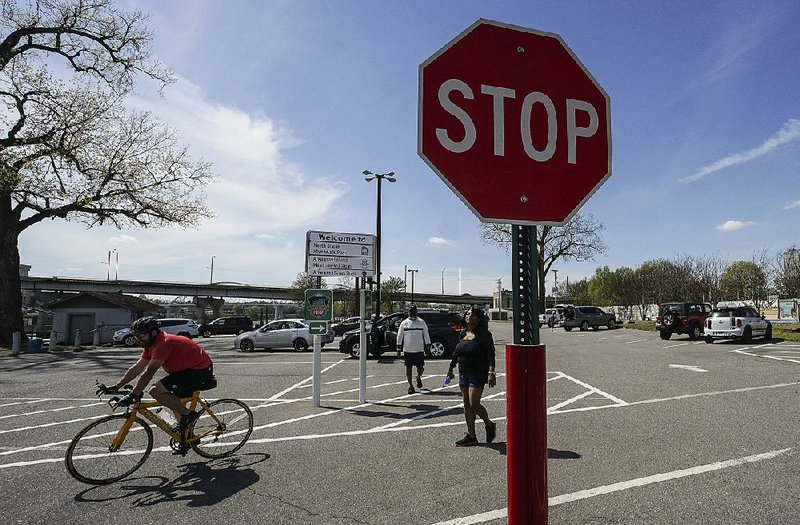 Cyclists and visitors check out Riverfront Park on Friday in North Little Rock. With the legislation signed last week by Gov. Asa Hutchinson, Arkansas joins Idaho as the only states that have laws addressing rules for cyclists at stop signs and red lights. ( Mitchell PE Masilun)

Starting July 1, Arkansas bicyclists will be able to treat stop signs as yields and red lights as stop signs, thanks to a new state law that advocates and officials say will help keep cyclists safe and traffic rolling.

Gov. Asa Hutchinson signed Act 650 into law on Tuesday. Joe Jacobs, chairman of the Governor's Advisory Council on Cycling, said the law allows cyclists to maintain their momentum and encourages them to ride on back roads.

"It's good for bike safety, it's good for transit in the state, it's good for tourism," Jacobs said. "It's a really good law, particularly for towns that don't have strong cycling infrastructure, like protected bike lanes."

The law states that bicyclists must slow down at stop signs and may proceed only if traffic is clear and the action doesn't present an immediate hazard. Under the same conditions, cyclists may take off before cars at stoplights after they stop.

"A lot of times, traffic cameras don't detect bikes. A bike could literally wait at an intersection indefinitely," John Landosky, Little Rock's bicycle and pedestrian coordinator, said of the law's impact on traffic flow. "It will allow the bicyclist to more effectively use a transportation grid that is designed for automobiles."

Arkansas is the second state to add a law that covers both stop signs and red lights. Previously only Idaho, which passed its version in 1982, has addressed both. Jacobs, who is the marketing and revenue manager at the state parks department, said the law would be helpful in marketing the state as "the cycling hub of the South."

Analysis of the Idaho law by sustainability and health consultant Jason Meggs in 2010 found that bicycle injury rates declined by 14.5 percent in the state the year after the law was adopted.

Little Rock city code states that bicyclists have the same rights and responsibilities as motorists. David Schoen, legal counsel at the Arkansas Municipal League, said state law would always pre-empt any local ordinance that conflicts with it.

Landosky said he would incorporate information about the new law into the city's friendly-driver certification course, a free, two-hour class that teaches participants how to drive more safely around bicyclists and pedestrians. He said he wanted to address any concerns drivers have about cyclists.

Dane Eifling, who coordinates bicycle programs in Fayetteville, said he hoped to plan a community group ride on July 1 to raise awareness about the new law, which he said he felt was a win for the state.

"It's kind of already happening, and it's really kind of common sense for everyone on a bicycle," Eifling said. "You're really only risking your own neck. It's unusual that you'd hurt anyone else. You can't just blow through stop signs. If you get hit, it's going to be your fault."

He added that Fayetteville, unlike most other cities, has traffic cameras that pick up on a bike at stoplights.

Michelle Smith, a member of the Governor's Advisory Council on Cycling, said she felt the new law would be especially helpful for cyclists navigating Little Rock's downtown, and for people who are new to the activity.

She acknowledged that many people who aren't familiar with cycling might not understand what the law does, but said it ultimately increases safety and convenience for people in cars and on bikes.