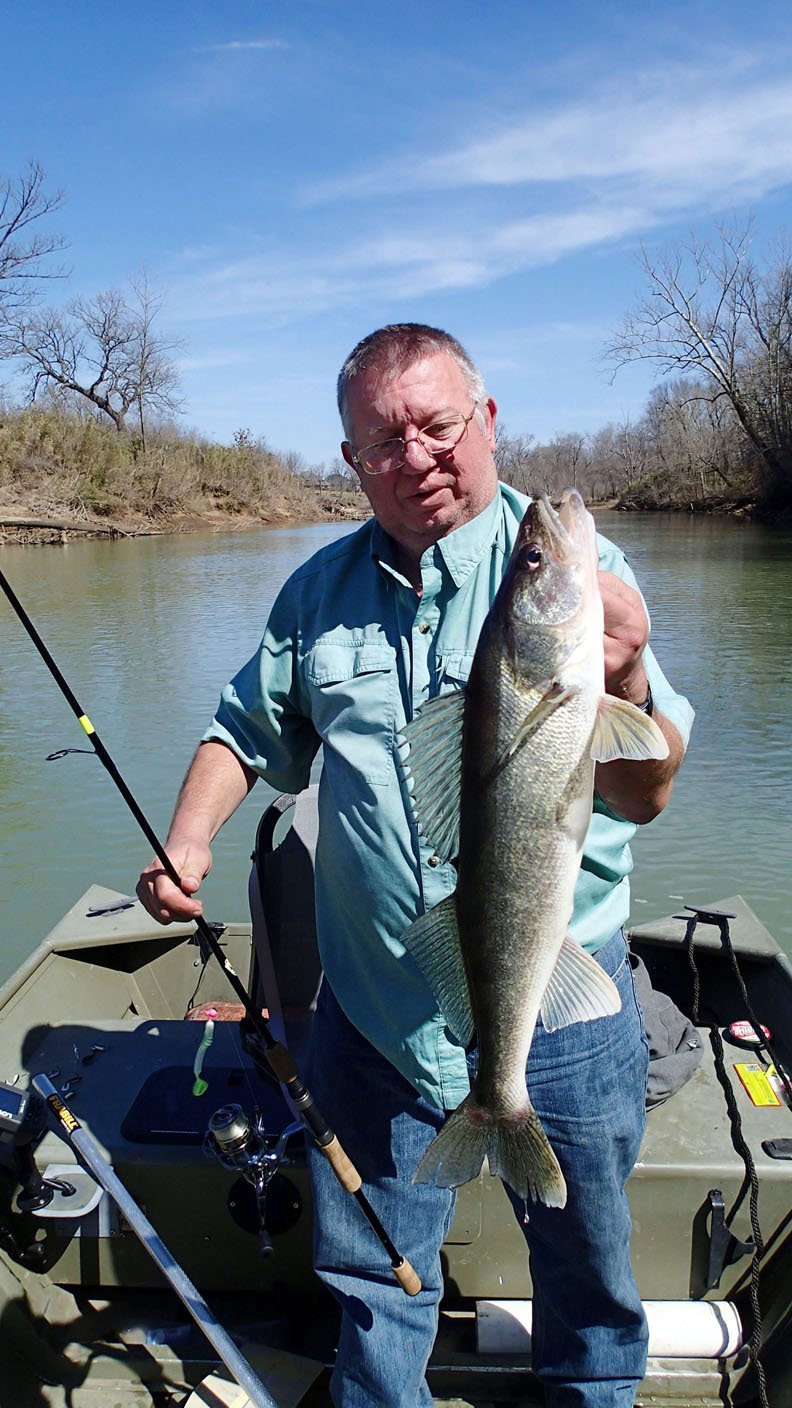 NWA Democrat-Gazette/FLIP PUTTHOFF Mike McBride used a single-tail grub to catch this 21-inch walleye in mid-March on the White River east of Fayetteville.

The fishing grapevine is ripe with reports of good walleye and white bass fishing as the water warms.

Spring sparks the spawning run for white bass and walleye on the tributaries of Beaver Lake. Anglers follow the spawning migration, especially on the White and War Eagle rivers. Boats ply the narrow, shallow water and anglers cast from shore.

The White River near the Arkansas 45 bridge east of Fayetteville is where Mike McBride of Winslow spends his fishing time in the spring. Crappie fuel his fishing passion most of the year. In March and April, crappie take a back seat to walleye and white bass.

"This year the white bass run is the best I've seen it in a long time," McBride said while chugging upstream in his flat-bottom boat and outboard. "Already I've caught three times as many as I did last year, and it's just getting started."

The air temperature was 29 degrees and ice crusted the bow of McBride's boat when he launched at daybreak on March 22. That put a chill on the fishing, too. McBride didn't catch a fish until mid-morning.

By mid-afternoon it was 68. Warm sunshine put a smile on McBride's face and got the fish biting.

He kept a fine 21-inch walleye and released a dozen good-sized white bass. An armada of boats and anglers tested the waters upstream and down from the Arkansas 45 bridge White River access where McBride launched.

"Walleye start moving up here in February, but March is the prime walleye month," McBride coached. "The white bass get started in the middle of March."

Walleye are his prime target. He casts single-tail grubs or shallow diving crank baits on a walleye quest. Favorite grub colors are white or yellow. Chartreuse is his preferred crank bait color.

Simply cast the lures and work them near the bottom where walleye dwell.

For white bass, an Alabama rig is the hot lure. The rig allows an angler to fish a half-dozen small soft-plastic grubs on a fine wire harness to mimic a school of baitfish.

On this fishing trip, there were times when every angler McBride could see was heaving an Alabama rig.

Any lure that resembles a minnow is a good choice for white bass. Lit'L Fishies are a soft-plastic lure that finds favor with legions of white bass chasers, McBride said.

Anglers are likely to see Arkansas Game and Fish Commission wildlife officer Kevin Eubanks chatting with anglers at the Arkansas 45 bridge access during the spawning runs.

"The catching has been really good, and it started pretty early," Eubanks said. Walleye fishing has been particularly good, he added, and should last for another week or two.

White bass fishing is superb as well. That can last into early May "unless we get a big flood. That can mess things up for a week or two," McBride said.

Fishing is good in the War Eagle River, reports Tomek Siwiec of Rogers. Siwiec whips the War Eagle to a froth each spring while fly fishing with a Clouser minnow.

He's done well catching white bass, except when the river level is high.

The White and War Eagle tributaries aren't the only places to catch white bass, noted Jon Stein, a Northwest Arkansas fisheries biologist with Game and Fish.

"Not a lot of people know it, but white bass spawn on the riprap on the north side of Beaver Dam," Stein said. That could be why the area is known as "White bass cove" among the locals.

The White River below Beaver Dam is another potential white bass hot spot.

"The tailwater usually is about a week or two behind everywhere else if they're generating a lot and the water stays cold," Stein said.

The area between U.S. 62 bridge and Holiday Island on Table Rock Lake also is popular with walleye and white bass anglers during spring.

For walleye and white bass hunters like McBride, the good fishing this year is great news. But there's more, McBride beamed. The crappie should start turning on any day now.

The White River east of Fayetteville can be a busy place during the walleye and white bass spawn. The river is narrow and shallow. Boaters should think courtesy at the boat ramp and on the water to ensure everyone has a pleasant fishing trip, said Jon Conklin, a fishing guide on the river and Beaver Lake. Here are some tips:

• Have your boat ready to launch when you back the trailer down the ramp, Conklin advised. Don’t back down the ramp, then fiddle around on the ramp putting in the drain plug, removing tie-down straps or arranging tackle. Do that in the parking lot.

• The ramp at the Arkansas 45 bridge access is designed so two boats can be launched side by side. Don’t back down the middle of the ramp and take up both lanes.

• On the water, don’t run your boat at half throttle. That creates a huge wake that can capsize fishing kayaks or canoes. Go by other boats slowly to produce a minimal wake.

• When going around boats where people are fishing, pass as far away from the other boat as possible.