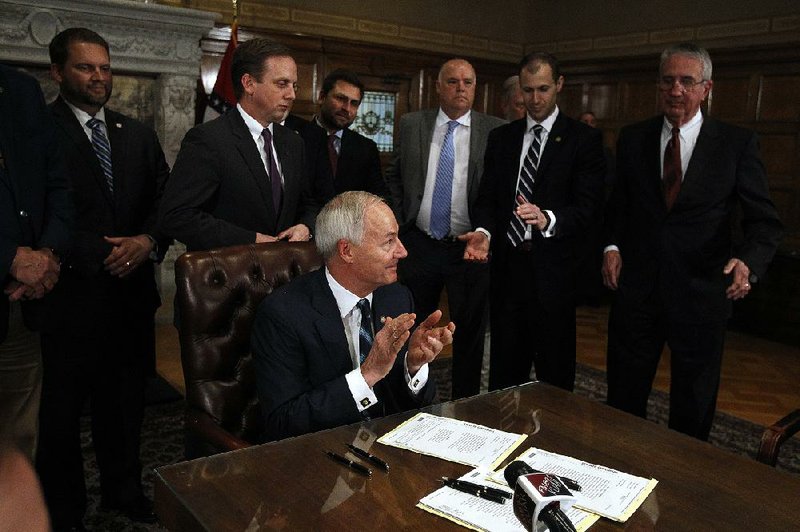 Gov. Asa Hutchinson applauds legislators for their work while signing tax bills into law Tuesday during a ceremony at the state Capitol. More photos are available at arkansasonline.com/410genassembly/ ( Arkansas Democrat-Gazette / Thomas Metthe)

Surrounded by several legislative leaders, the Republican governor said the Tax Reform and Relief Legislative Task Force's substantive and lengthy work in recent years "set the stage for this session and, once that stage was set, we've lowered the income tax rate, we've had comprehensive corporate tax reform as well as property tax relief reform."

The governor's bill-signing ceremony took place the day before lawmakers are scheduled to go home. The Legislature plans to recess after the close of business today and adjourn for good on May 6.

The legislation signed Tuesday was the latest since the regular legislative session began Jan. 14.

Nearly two months ago, Hutchinson signed Act 182 that will phase in a reduction in the state's top individual income tax rate from 6.9 percent to 5.9 percent over a two-year period, starting Jan. 1 of next year. State officials project this cut will reduce state revenue by about $97 million a year, after it's fully implemented.

Senate President Pro Tempore Jim Hendren, R-Sulphur Springs, who served as a co-chairman of the task force, said, "Personally, this is a big day because this is the culmination of almost two years of work by everybody that you see standing up here.

"We began working on tax reform almost two years ago with a goal of making it simpler, fairer and making Arkansas more competitive, and the bills you see here accomplish all of those goals," said Hendren, whose uncle is the governor.

"It is a truly comprehensive, competitive tax bill that will put us in a better position with our surrounding states and support our industries and our businesses to a greater extent," Hutchinson said.

The bill "includes what many of the municipalities and small businesses wanted in our state, a procedure to collect sales and use taxes on remote sellers and this is not impacting the smallest of businesses," Hutchinson said.

Under Act 822, out-of-state remote sellers without a physical presence in the state will be required to collect and remit sales and use taxes on annual sales of more than $100,000 from products and services delivered into Arkansas. Alternatively, such sellers would be required to collect sales and use taxes if they sold products and services for delivery in Arkansas on at least 200 separate transactions.

These thresholds are identical to those imposed by South Dakota that were upheld by the U.S. Supreme Court in 2018 in South Dakota v. Wayfair, the finance department said.

These out-of-state sellers will begin collecting the tax July 1. The sales thresholds would apply to the previous calendar year or the current year.

Act 822 also requires "marketplace facilitators," such as Amazon or eBay, that sell or facilitate sales for their participating sellers to collect and remit applicable state sales taxes on all purchases through the marketplace.

According to the department, Act 822 also would:

• Change the state's sales and tourism tax provisions to provide that "accommodations intermediaries" would be required to collect and remit Arkansas taxes when furnishing an accommodation in the state. That's projected to raise $3.1 million in state revenue in fiscal 2020 and then $4.2 million in fiscal 2021.

"I applaud our legislators because they wanted to put this as a priority. Mine has been concentrated on individual income tax rate reductions, but they want to make sure that we are competitive in our corporate income tax rate," Hutchinson said.

• Extend the net operating loss carry-forward period from five to eight years for losses occurring in the tax year starting Jan. 1, 2020, and to 10 years for losses in tax years beginning on or after Jan. 1, 2021, according to the finance department. That is projected to reduce state revenue in fiscal 2026 by $7.8 million and eventually $70 million in fiscal 2032.

• Change the apportionment formula for multistate corporations from three factors to a single-sales factor. That's projected to increase revenue by $357,000 in fiscal 2021 and $714,270 in fiscal 2022 and beyond.

• Provide a carwash-related sales-tax exemption and levy monthly water usage fees on operators of tunnel carwashes and automatic carwashes. The fees would be calculated on eight-tenths of the total aggregate number of gallons of water used during the month and levied at four-tenths of a cent per gallon on tunnel carwashes and at two-tenths of a cent on automatic carwashes. The changes are projected to reduce revenue by $3.3 million a year.

Hutchinson also signed Senate Bill 447 by Hendren that will increase the homestead property-tax credit from $350 to $375 per parcel for assessment years starting Jan. 1 of this year. The bill also provides state support to help counties buy voting machines. The bill is now Act 808, Davis said.

As part of his re-election campaign last year, Hutchinson proposed increasing the homestead credit to $375.

"This is a $12.5 million tax cut for Arkansans," the governor said. "It helps the homeowners, those who have lived in the same home for years and this will help us to show our homeowners that we still want to make it easier for them, particularly as you get older in life."

Counties are reimbursed for giving the tax credits through a trust fund financed by a statewide half-percent sales tax. Besides increasing the tax credit, Act 808 would divert $8.2 million from the property tax relief trust fund to the county voting systems grant fund.

The long-term reserve fund already has more than $120 million, but "this will allow us to be in a position to ask for our bond rates to be at a higher premium so that our interest rates go down [and] it helps us to set aside for funds for any economic downturn in the future and helps us to protect our budget and our programs in Arkansas from education to public safety," Hutchinson said.

The homestead credit was last increased $50 by the Legislature in 2007 at the behest of then-Gov. Mike Beebe, a Democrat. In 2000, voter approval of Amendment 79 to the Arkansas Constitution created the tax credit.

Hutchinson also signed Senate Bill 561 by Hendren that would transfer the administration and collection of the state's franchise tax from the secretary of state's office to the Department of Finance and Administration, effective May 1, 2021. The bill is now Act 819, Davis said.

Act 819 also will implement several other changes recommended by the tax task force, including:

• Requiring the Assessment Coordination Department to adopt mandatory guidelines to be followed by county assessors to identify property exempt from property taxes and for assessing business inventory. The department would report noncompliance by counties to the Legislature.

• Requiring the finance department to report to the Legislative Council and the governor before each regular legislative session on the effect of each income and sales tax exemption, discount, credit and deduction. It will cost about $875,000 for staff and consulting services and computer software services to prepare the biennial reports.

• Providing a sales tax exemption for advertising space on a public transit bus, effective Oct. 1. The revenue loss would be about $50,000 a year. The state already exempts billboard advertising from sales tax.

• Require more information on all-terrain vehicles to ensure that they are eligible for the farm machinery and equipment sales tax exemption at the time of purchase, effective Oct. 1.

A month ago, Hutchinson signed Act 416 that will levy a wholesale tax on gasoline and diesel fuel and increase registration fees for hybrid and electric vehicles, effective Oct. 1, and reallocate casino tax revenues and other state revenue to raise about $95 million a year more for highways. The measure also is projected by state officials to raise about $13 million a year more apiece for cities and counties. 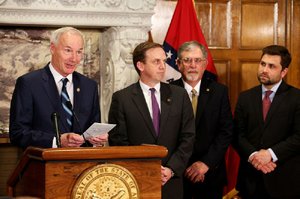 Photo by Thomas Metthe
Gov. Asa Hutchinson talks about the tax bills he signed Tuesday, with House Speaker Matthew Shepherd (second from left), Rep. Lanny Fite and Sen. Jonathan Dismang and others on hand for the ceremony. More photos are available at arkansasonline.com/410genassembly/