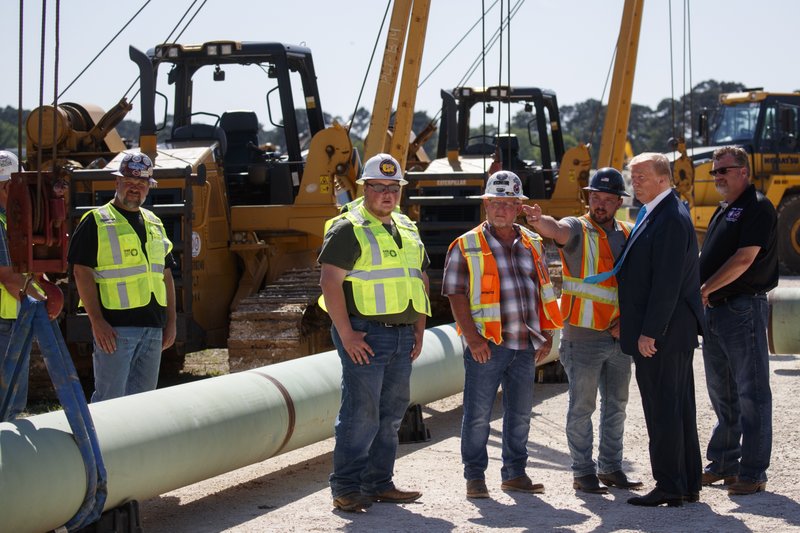 CROSBY, Texas — President Donald Trump's support for shifting more power to states on Wednesday faded next to his affinity for oil and gas production, as he aimed to make it harder for states to block pipelines and other energy projects due to environmental concerns.

At the urging of business groups, Trump signed two executive orders designed to speed up oil and gas pipeline projects. The action came after officials in Washington state and New York used the permitting process to stop new energy projects in recent years, prompting complaints from Republican members of Congress and the fossil fuel industry.

"Too often badly needed energy infrastructure is being held back by special interest groups, entrenched bureaucracies and radical activists," Trump complained before signing the orders.

The Trump administration insisted it was not trying to take power away from the states but, rather, trying to make sure that state actions follow the intent of the Clean Water Act. Under a section of the law, companies must get certification from the state before moving ahead with an energy project.

Washington state blocked the building of a coal terminal in 2017, saying there were too many major harmful effects including air pollution, rail safety and vehicle traffic.

Less than a week ago, nearly a dozen business groups told Environmental Protection Agency Administrator Andrew Wheeler that the environmental review and permitting process for energy projects "has become a target for environmental activists and states that oppose the production and use of fossil fuels."

The groups said in an April 5 letter that individual states shouldn't be able to use provisions of the Clean Water Act "to dictate national policy, thereby harming other states and the national interest and damaging cooperative federalism."

Trump singled out New York for his harshest criticism, saying "obstruction" by the state "was hurting the country."

"States must have a role in the process for siting energy infrastructure like pipelines, and any efforts to curb this right to protect our residents will be fought tooth and nail," Cuomo said.

Washington Gov. Jay Inslee, a candidate for the Democratic Party's presidential nomination, issued a joint statement with the state's attorney general, Bob Ferguson, calling the executive orders "an unprecedented assault on the right and obligation of every state to protect their waters and their communities."

"We intend to challenge any attempt by the administration to illegally constrain Washington's authority to protect our state's natural resources," the governor and attorney general said.

One of Trump's executive orders calls for the EPA to consult with states, tribes and others before issuing new guidance and rules for states on how to comply with the Clean Water Act.

The order also directs the transportation secretary to propose a rule allowing liquefied natural gas to be shipped in approved rail tank cars, and directs the labor secretary to review whether investment fund managers who invest based on social goals are fulfilling their responsibility to maximize shareholder returns.

Environmental groups described Trump's order as an effort to short-circuit a state's ability to review complicated projects. The environmental group Center for Biological Diversity said the orders would mark the fourth time Trump has used executive actions to streamline permits for fossil-fuel infrastructure.

Trump has linked growing gas and oil production in the U.S. with the creation of jobs and a reduction in fuel prices for consumers. He signed the orders while visiting the International Union of Operating Engineers International Training and Education Center, a union-run facility northeast of Houston.

Trade groups representing the oil and gas industry applauded the orders and said greater access to natural gas benefits families and the environment.

"When states say 'no' to the development of natural gas pipelines, they force utilities to curb safe and affordable service and refuse access to new customers, including new businesses," said Karen Harbert, president and CEO at the American Gas Association.

The second executive order is designed to ease the process for energy projects that cross international borders.

Currently, the secretary of state has the authority to issue permits for cross-border infrastructure such as pipelines. The executive order clarifies that the president will make the decision on whether to issue such permits.

The move follows Trump's decision last month to issue a new presidential permit for the long-stalled Keystone XL oil pipeline — two years after he first approved it and more than a decade after it was first proposed.

Trump signed the orders in between campaign fundraisers in San Antonio and Houston that were expected to net at least $6 million for Trump's re-election effort and the Republican Party.