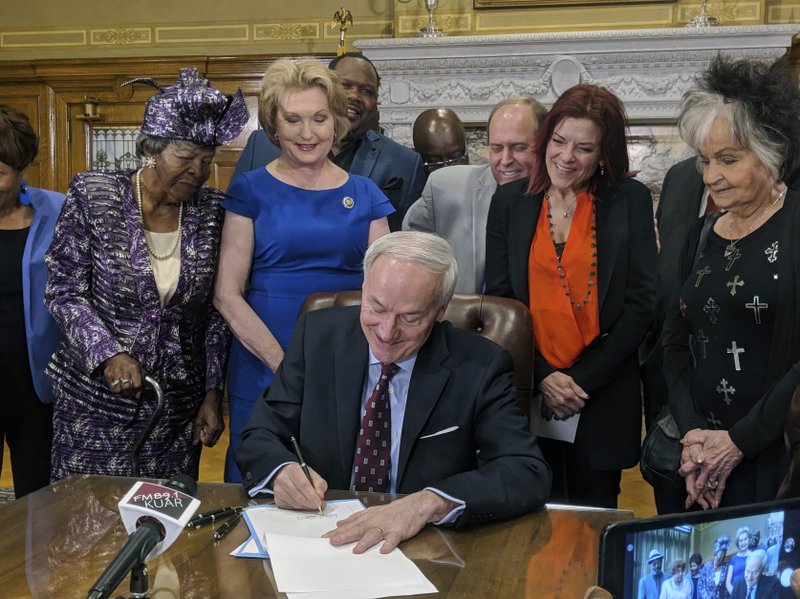 Gov. Asa Hutchinson on Thursday signed into law a bill that will swap out the state's current statues at the Capitol's National Statuary Hall Collection, which are of 19th century attorney Uriah Rose and former Arkansas Gov. and Sen. James P. Clarke, with the statues of Bates and Cash.

"This is an extraordinary moment recognizing the contributions of two incredible Arkansans," said Hutchinson, who was joined at the signing ceremony by friends and family of Bates and Cash. "We want our memories, through our statues, to tell the story of Arkansas. I believe our story is well represented by these two historic figures."

Bates was an activist, writer and mentor to the nine black children who integrated Little Rock Central High School in 1957. Cash, who died in 2003, grew up in Dyess, which is about 131 miles northeast of Little Rock.

Cash's daughter, the singer-songwriter Rosanne Cash, said her family was honored, noting that for her father, Dyess was "the wellspring from which he drew his inspiration."

"He said quite often that he loved every rock, every tree, every clot of earth in Dyess, Arkansas," she said.

She also said it was even more special that he would share the honor with Bates, who died in 1999.

Bates' 87-year-old goddaughter, Jan Brown, said she was thrilled that her godmother's statue would join that of her fellow civil rights leader and friend, Rosa Parks, at the Capitol. Congress authorized the statue of Parks in 2005, and it was unveiled eight years later.

"For her to join that black lady means everything to me," Brown said. "Everything."

The National Statuary Hall Collection features two statues from each state. Arkansas sent the statue of Rose in 1917 and the statue of Clarke in 1921.

Clarke's great-great grandson, Clarke Tucker, who ran unsuccessfully as a Democrat for central Arkansas congressional seat last year, said the statue should be replaced and condemned an 1894 speech in which his ancestor said that Southerners looked to the Democratic Party "to preserve the white standards of civilization."

The state will now need to raise the funds for the statues either through appropriation or private donation.