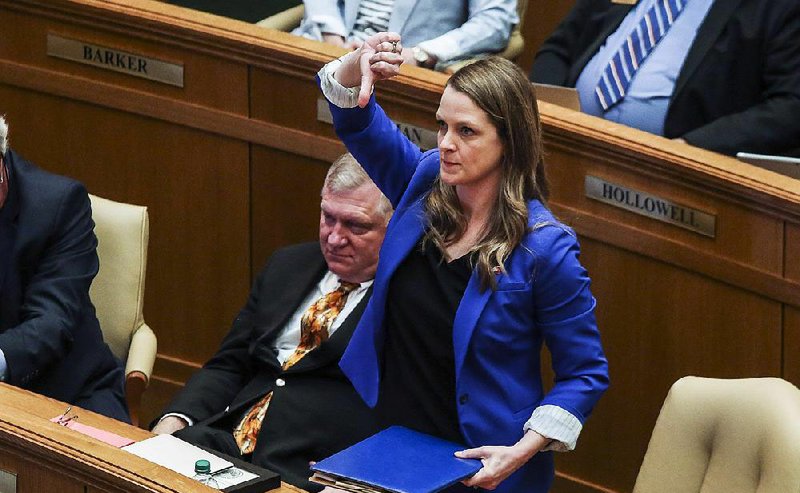 Rep. Megan Godfrey, D-Springdale, rises to speak against Senate Bill 411 in the House on Wednesday. Godfrey said such legislation “causes unease and hurt in diverse communities like mine.” She asked colleagues to “prayerfully consider” voting against the bill.

Despite the governor's concerns that the bill could spur instances of racial profiling, House lawmakers on Wednesday approved legislation to prohibit the state's cities, towns and counties from adopting "sanctuary" policies that protect people in the country illegally.

The mostly party-line vote, 74-24, just before noon sent Senate Bill 411 to the governor's desk. It was one of the final actions taken by the House before lawmakers recessed on what was unofficially the last day of this year's regular legislative session. (Lawmakers plan to meet April 24 to make any legislative corrections and then adjourn for good.)

Several hours later, Gov. Asa Hutchinson invited reporters into his office to say that he planned to sign SB411 into law.

The governor said his decision to sign the legislation came after the bill's sponsor, Sen. Gary Stubblefield, R-Branch, agreed to amend the law during a future session. The agreement, according to the governor, would add a requirement for "probable cause" to a provision of the bill that allows law enforcement authorities to stop people and question them about their citizenship or immigration status.

Stubblefield could not be reached for comment on Wednesday. If the governor had vetoed the bill, it would have taken a simple majority of both chambers to overturn it.

"I think it's important ... to ensure the public that we're going to continue to enforce our law. We're going to continue cooperation with our federal law enforcement authorities, but there should not be a climate of fear," Hutchinson said. "I see the municipalities continuing to make sure that they do this in a fair manner and that it will not be applied in a racially discriminatory manner and we will get this corrected as soon as the Legislature can meet again."

Just minutes before the governor's conference with reporters, Hutchinson had held a signing ceremony for a separate pair of bills -- House Bills 1552 and 1684 -- that extended in-state tuition and nursing licenses to some immigrants.

As the governor explained to reporters his rationale for supporting the anti-sanctuary city bill, the whoops and cheers from immigrant activists who had come to celebrate the tuition and licensing bills' signing could be heard emanating from a nearby conference room. Some of those same activists, including those aligned with the Fayetteville-based Arkansas United Community Coalition, had become a recent presence at the Capitol speaking out against SB411.

"Please express that this is still a welcoming state, that immigrants can come out of their house, they can go to work, they can shop," said Mireya Reith, the coalition's director, after being told of the governor's intent to sign SB411.

As Republican majorities in the House and Senate hurried passage of SB411 in the final days of the session, Reith warned lawmakers that giving law enforcement officers the discretion to question people about their immigration status -- without probable cause of other crimes -- would open cities and counties up to litigation.

The Arkansas Municipal League also had taken a stance against SB411, asserting that no cities or counties in the state have applicable "sanctuary" policies.

The House sponsor of SB411, Rep. Brandt Smith, R-Jonesboro, addressed the claims that his bill was unconstitutional and subject to litigation as he talked on the House floor Wednesday.

"I don't like threats like that," Smith said. "As each of you already know, sanctuary policies defy federal law, which our city, county and state governmental bodies are bound to comply with."

SB411 would allow the state to withhold funding from any localities that enact so-called "sanctuary" policies, whether those policies be written or unwritten.

Democrats who spoke against the bill Wednesday questioned whether localities accused of adopting sanctuary policies would be able to defend their actions. As written, SB411 gives the authority to the attorney general to determine whether a city is in compliance, but it does not require a hearing on the matter. The attorney general's opinion may be appealed to the circuit court in Pulaski County.

Others opponents pleaded with their colleagues to consider the emotional ramifications of the bill.

"It causes unease and hurt in diverse communities like mine," said Rep. Megan Godfrey, D-Springdale, who closed by asking lawmakers to "prayerfully consider opposing the bill."

In an effort to delay consideration of SB411, House Minority Leader Charles Blake, D-Little Rock, requested that a fiscal impact statement be prepared to determine if there would be any costs to cities or towns that will be made to comply with the law. The request, which was rejected by House Speaker Matthew Shepherd, R-El Dorado, set off an exchange about the state law and parliamentary procedure.

Under the law governing fiscal impact statements -- Arkansas Code Annotated 10-2-114 -- when a member requests such a statement on the House floor, the speaker "shall furnish" a signature form, with the date and time the request was made. The requesting member then has 30 minutes to collect nine signatures from other members also seeking such an impact statement, prompting a fiscal analysis to be prepared.

Asked later about his denial of Blake's request, Shepherd told reporters that he had not received a signature form from Blake. Regardless, he said he had consulted with the House parliamentarian and determined that no fiscal impact statement was required.

"By the plain language of the bill, there was no expenditure or cost required by the bill itself," Shepherd said.

In turn, Blake told a reporter that the speaker declined to provide such a form, as required by law, but that Democrats had come up with their own form, and signed 11 names. Blake provided a copy of that form and the signatures to the Arkansas Democrat-Gazette.

"By pushing that bill through at the end of session, it hurt the integrity of the process," Blake said while speaking to a reporter Wednesday. "We had to vote on a bill that we didn't know what the actual cost would be incurred to the cities."

After the bill made it out of the House, activists around the Capitol and on Twitter encouraged supporters to call Hutchinson and ask him to veto the legislation.

Godfrey, who sponsored one of the two immigration bills signed by the governor Wednesday afternoon, said she had met with the governor shortly before the ceremony, at which point she was told of his intentions to sign SB411. The governor did not set a date for when he planned to sign the bill, but he has five days (not counting Sunday) to sign it, veto it or let it become law without his signature.