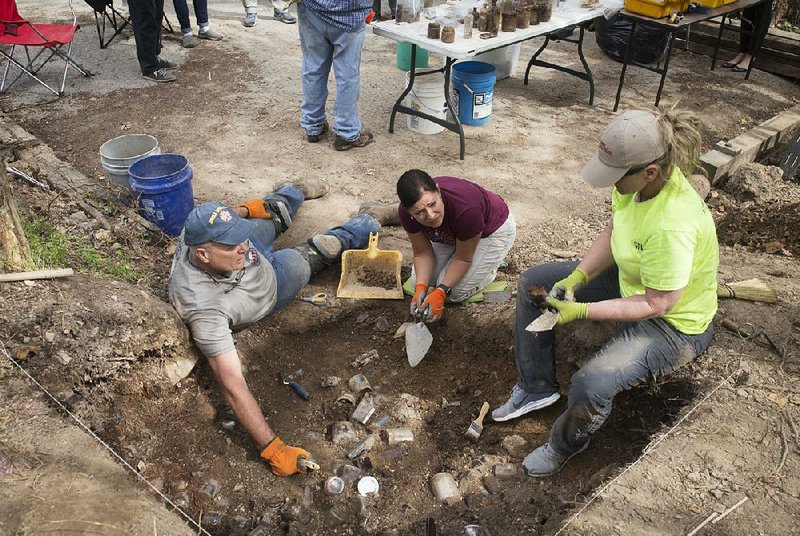 EUREKA SPRINGS -- More than 400 glass bottles have been unearthed in the backyard of the Crescent Hotel.

They appear to date from 1938-40, when the building served as Baker Hospital and Health Resort.

Norman Baker, who owned the hospital, claimed to have found a cure for cancer. But there is no evidence his concoction ever cured anyone.

According to Eureka Springs lore, in the hospital morgue, Baker had rows of jars full of samples of tumors that had been removed from patients. A full-page advertisement in the hospital's magazine included pictures of the jars.

"We have hundreds of specimens like these," the ad said. "Actual cancer specimens and laboratory data proves all. ... All specimens are preserved in alcohol."

The bottles in the advertisement look a lot like the bottles buried behind the 133-year-old Crescent Hotel.

"These bottles perfectly match with the posters and photographs of Baker's bottles at that time," said Mike Evans, station assistant archaeologist with the Arkansas Archeological Survey in Fayetteville who has been working at the site.

Baker was convicted of mail fraud in 1940 and his hospital closed, according to the Encyclopedia of Arkansas History and Culture. He spent three years in the federal penitentiary at Leavenworth, Kan. Baker died in 1958.

Keith Scales, who leads ghost tours at the Crescent, said officials were told that subsequent owners of the building took all of Baker's specimen bottles to the dump in the 1960s. He thought that meant a landfill near Berryville, but apparently it meant a dump behind the building. 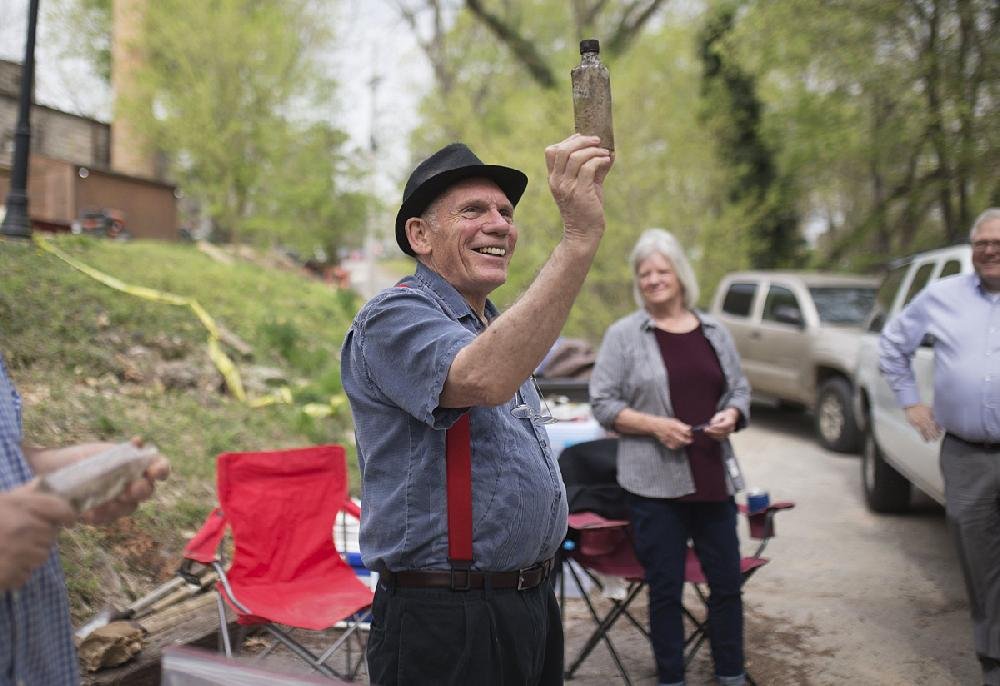 Keith Scales, who leads ghost tours at the Crescent Hotel, holds up a jar pulled from the excavation site Thursday behind the Eureka Springs hotel. Scales said he hopes to incorporate the archaeological finds into his tours.

Susan Benson, the Crescent Hotel's "landscape artist," uncovered the "bottle dump" Feb. 5, when she was moving earth with a backhoe to make way for an archery range behind the hotel.

The Arkansas Department of Environmental Quality and the Arkansas State Police were called in. State police officers determined that it wasn't a crime scene or burial site, Evans said.

"ADEQ took samples and said it's mostly alcohol, so it's safe," he said.

More than 20 of the bottles contain what appears to be tissue. Whether that tissue is human, animal or prefabricated "props" has yet to be determined. Evans said the samples will be sent to the University of Arkansas for Medical Sciences and the state Crime Laboratory for analysis. If some of the samples are of humans, DNA tests could be done to provide more information, he said.

Those samples were still floating in alcohol. Evans said 100 other bottles, from which the alcohol had escaped through decaying lids, may also contain tissue samples -- still pickled and preserved. 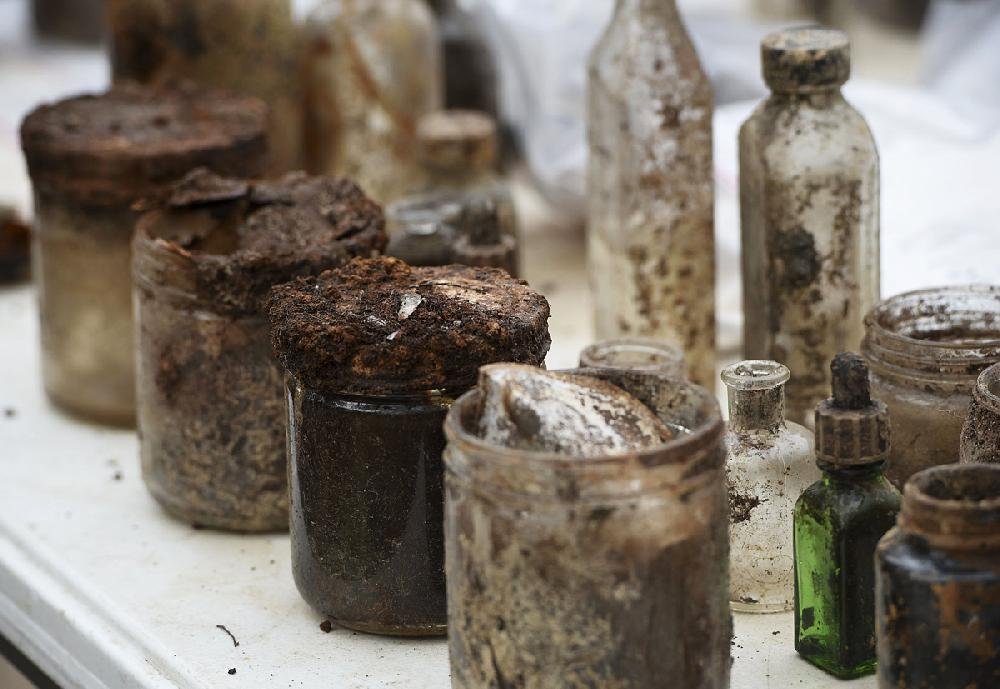 Jars and bottles excavated from a trash pit in the backyard of the Crescent Hotel in Eureka Springs await further attention Thursday.

Evans said Baker could have purchased tissue samples in the 1930s. Also, he might have taken them with him when he moved to Eureka Springs. He previously operated a similar facility called the Baker Institute in Muscatine, Iowa.

"This is part of medical history for Arkansas," Evans said of the excavation. "A lot of doctors are interested in this."

Jack Moyer, vice president and general manager of the Crescent Hotel, said he doesn't believe Baker performed surgeries on live patients at the hospital in Eureka Springs, but he performed autopsies on patients who died there.

Scales said the records indicate that 40 people were taken from the hospital to the mortuary during the 20 months that Baker operated the hospital.

Scales said Baker wasn't a doctor. He was an entrepreneur who started out in vaudeville, where he performed as a hypnotist and illusionist. He later got into radio broadcasting and invented a portable organ called the Air Calliaphone, which ran on air pressure. Baker ran for U.S. Senate and governor of Iowa, losing both elections. He was often cross-ways with the American Medical Association.

"This showman, with his white suits and lavender ties, hawked a form of populism that distrusted science, education, Jews and Catholics," according to the encyclopedia article. "Paranoia ran throughout his life, and in Eureka Springs he had his office sealed off in bulletproof glass and kept two sub-machine guns within easy reach."

Moyer said the bottle dump is another piece of a puzzle.

"There's a lot of lore of what happened in the past," Moyer said. "This site is proving what we heard happened here in the past is true."

Moyer said they've found a couple of bottles of what they believe was Baker's cancer "cure."

Scales said the ingredients of the elixir were revealed in a 1940 court case. He said it contained brown corn silk, red clover, ground-up watermelon seeds, peppermint, glycerin and carbolic acid. Documents indicate some patients were injected with the "cure" seven times a day, he said.

Evans said 16mm film reels were also found at the excavation site. The words on one frame could be deciphered through the decay. It read "Before Baker Treatments." 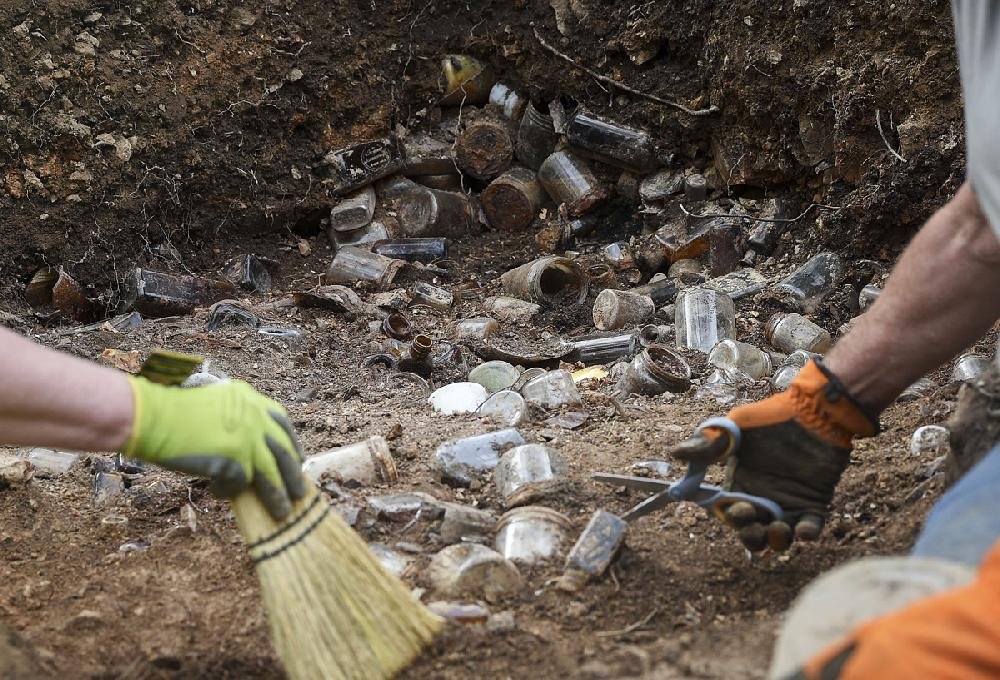 Jared Pebworth, another archaeologist from the survey who's been working at the site, said hundreds more bottles may be in the ground, but they have removed a representative sample.

Pebworth said the bottle dump could be an old root cellar. He's basing that on the fact that one side of it seems to be very well-defined with a straight line. He said dirt was placed over the bottles.

"They were hiding their trash," Pebworth said.

He said archaeologists will soon stop working at the site and leave it to the property owners.

Scales said he hopes to incorporate the archaeological finds into the ghost tours he has at the Crescent, which the tours promote as the most haunted hotel in America.

"I think we'll put up an interactive display of what we've found -- the innocuous stuff -- and it'll be part of our ghost tours," he said.

Scales said he hasn't noticed an increase of paranormal activity at the hotel since the bottle dump was found and excavation began.

But he'll bring in some experts who have machines for testing such things.

"This is providing validation to the lore that we have been spreading for years," Moyer said.