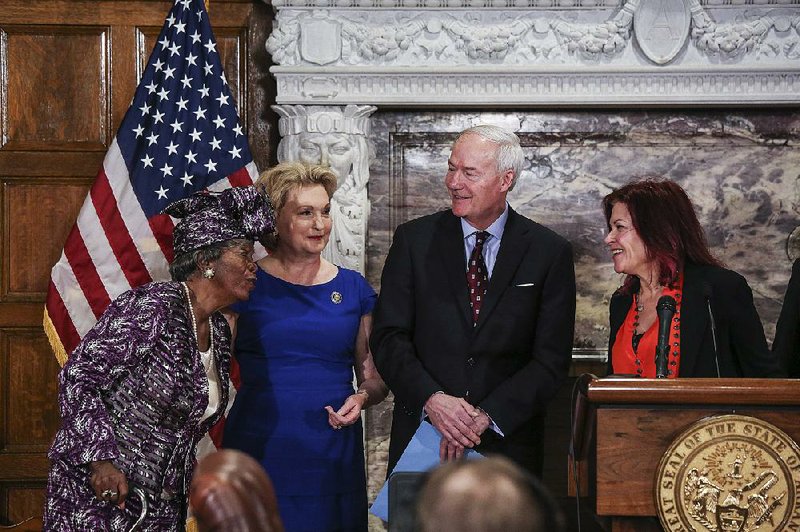 Annie Abrams (left) is introduced to Rosanne Cash, daughter of the late musician Johnny Cash, by Gov. Asa Hutchinson and Arkansas first lady Susan Hutchinson during a bill-signing ceremony Thursday at the Capitol.

So long, Uriah and James. Hello, Daisy and Johnny.

"We're especially honored that a statue of my dad has been chosen to represent Arkansas in our nation's Capitol," Rosanne Cash said during the event. "It's made even more special by the fact that he will be sharing this honor with Daisy Bates. She was a true humanitarian whose commitment to social justice, to civil rights is unparalleled."

Talking about her godmother, Brown of Little Rock said, "It looks like the state of Arkansas is shining down on one of its darling daughters today. To have her being recognized by millions of people all over the world, this is something that will resonate and will help improve our state. It's all about us joining together and making a difference, and Daisy Bates truly made a difference."

Hutchinson said they are good choices for the state.

"We want our memories through our statues to tell the story of Arkansas, and I believe our story is well represented by these two historic figures."

"When you look at Mrs. Daisy Bates, you're looking at courage," he said. "Mrs. Bates changed Arkansas for the better. Johnny Cash represents the common man and the common woman in Arkansas."

About the same time that Johnny Cash, who was born in Kingsland and grew up in Dyess, was redefining the early sounds of rock 'n' roll through songs he recorded at Sun Records in Memphis, Bates, who grew up in Huttig, was mentoring the Little Rock Nine during the desegregation crisis at Little Rock Central High School in 1957.

She and her husband, L.C., published the Arkansas State Press, a statewide weekly paper that advocated for civil rights for blacks. She was president of the Arkansas Conference of Branches, the umbrella organization for the state NAACP, and was the only woman to speak at the Lincoln Memorial at the March on Washington on Aug. 28, 1963, according to the Encyclopedia of Arkansas. She died Nov. 4, 1999, at Baptist Medical Center in Little Rock.

Cash's boom-chicka-boom, plainspoken songs about hard times, rings of fire, shooting a man in Reno, the working class and heartache earned him fans all over the world. His records have sold more than 90 million copies and his music, coupled with his independent attitude as The Man in Black, was an influence to generations of musicians. Cash is one of only a handful of artists inducted into both the Country Music Hall of Fame and the Rock and Roll Hall of Fame. He died Sept. 12, 2003, at Baptist Hospital in Nashville, Tenn.

Also signed during the ceremony was a law designating Sept. 1 of each year as Music Appreciation Day in the state.

The movement to replace the Clarke and Rose statues started years ago, as various lawmakers pitched bills to update who represented Arkansas. For example, Sen. Bart Hester, R-Cave Springs, introduced a shell bill -- meaning it lacked details -- in the 2017 regular session. In an interview last year, Hester said he had toured the U.S. Capitol and didn't know anything about the people depicted by Arkansas' statues.

Hester said he didn't pursue the bill then because more dialogue was needed. He had planned to introduce a bill in this year's regular session but deferred to Wallace's bill. In all, four bills were introduced this year regarding the Statuary Hall Collection.

Clarke, who was governor from 1895-97 and a U.S. senator from 1903-06, had segregationist views. Neither he nor Rose, who helped found the Rose Law Firm and the American Bar Association, are exactly household names.

They are there because of a law passed by Congress in 1864 inviting each state to submit up to two bronze or marble statues to be placed in the old House chamber, now known as Statuary Hall. The honorees, according to the law, must be deceased, state residents and "illustrious for their historic renown or for distinguished civic or military services."

Rose's marble likeness was approved by the state Legislature in 1917. Clarke's approval came in 1921.

As more states were created and the weight of the marble became too much, the statues were spread across the Capitol and its visitors center. Rose's statue sits in a corner of Statuary Hall, according to a 2014 Democrat-Gazette story, while Clarke's is near the entrance to the Capitol visitors center, across from the coat-check office.

In recent decades, states began pushing for the opportunity to change their statues. In 2000, Congress agreed to allow states to submit new statues, if the state paid the cost.

Former state Rep. Clarke Tucker, a Democrat from Little Rock, is the great-great-grandson of Clarke. He approves of the new choices.

"If I could pick any two, those would probably be the two," he said on the day before the signing. "Johnny Cash is my favorite musician of all time. He's had a pretty significant impact on my life through his music. And I'm a Central High grad and I absolutely worship the Little Rock Nine and Daisy Bates."

In February, the Senate voted 33-0 to send Senate Bill 75 by Wallace to the House, where it first met with some opposition from those who thought Cash, who battled drug addiction, wasn't the best choice.

"The drugs, the alcohol, the women. I can't hold him up as a model for my children to look after," said Rep. Douglas House, R-North Little Rock, in March.

"I don't think you can look at a great artist like that and say that this rocky period of his life overtakes what he did and who he was," said Rosanne Cash after the signing.

"There will be no money coming out of the state government. The secretary of state will monitor the funds and work with the different groups that will be accruing the funds. That way we will have government oversight, but no government funding."

What will happen to the likenesses of Rose and Clarke? That will be decided later.

"I would like to see them in the Old Statehouse," Wallace said, referring to the old Capitol building that is now a museum. "That was their era. That's where they served or worked."