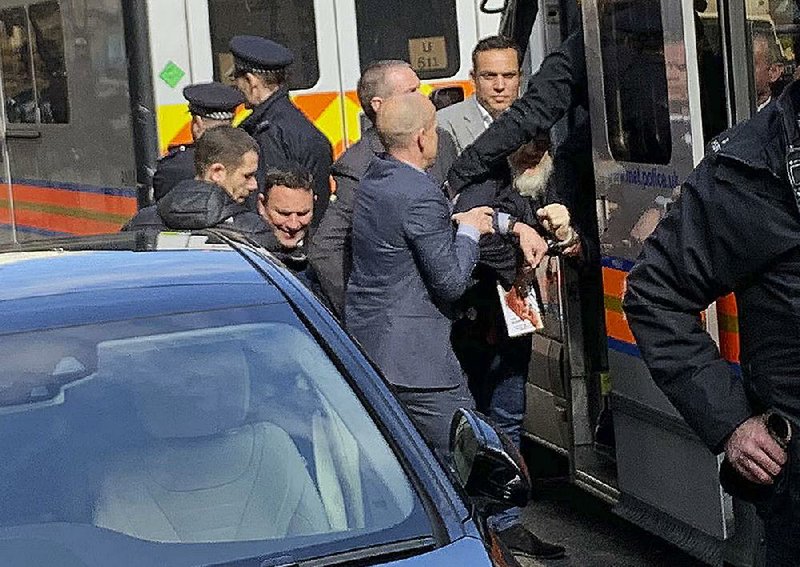 Police rush WikiLeaks founder Julian Assange from the Ecuadorian embassy into a police van in London after he was arrested by officers from the Metropolitan Police and taken into custody Thursday.

LONDON -- Key figures in Britain's opposition Labor Party said Friday that the government should oppose the extradition of WikiLeaks founder Julian Assange to the United States on charges of conspiring to break into a Pentagon computer.

Party leader Jeremy Corbyn said in a tweet that the U.S. is trying to extradite Assange because he exposed "evidence of atrocities in Iraq and Afghanistan."

Diane Abbott, the Labor Party's spokesman for domestic affairs, said the government should block the extradition on human-rights grounds. She said the U.S. case against Assange is about the "embarrassment of the things he's revealed about the American military and security services."

WikiLeaks and Assange gained notoriety in 2010 when the organization published government secrets supplied by Chelsea Manning, then a U.S. Army intelligence analyst. More recently, the website put itself at the center of the 2016 American presidential race by publishing hacked emails from Hillary Clinton's campaign.

Assange faces what is likely to be a struggle to fend off extradition to the U.S. -- and possibly a second extradition request from Sweden on rape allegations.

Police arrested the WikiLeaks founder Thursday at the Ecuadorean Embassy in London after Ecuador withdrew his asylum. He is in British custody awaiting sentencing for jumping bail in 2012.

U.S. Justice Department officials seek to put Assange on trial on a charge of conspiring to break into a classified government computer at the Pentagon. The charge was announced after Assange was taken into custody. If found guilty, Assange faces a maximum five years in prison. It is also possible that Assange, 47, will face an extradition request from Sweden if prosecutors there decide to pursue allegations of rape and sexual misconduct against him.

Assange took refuge in the Ecuadorean Embassy in 2012 after he was released on bail in Britain while facing extradition to Sweden on the allegations. He had stayed inside the embassy building for nearly seven years.

Swedish prosecutors dropped the case against Assange in 2017, saying at the time that there was no prospect of returning him to Sweden because of his protected status inside the embassy. The allegations by two women have not been tested in court and Assange has denied wrongdoing.

"Mr. Assange's behavior is that of a narcissist who cannot get beyond his own selfish interests," Snow said.

Assange's next court appearance was set for May 2 through a prison video link in relation to the extradition case, a process that involves several layers of appeal that could take several years.

Extradition lawyer Ben Keith said the court will not assess the evidence against Assange in an effort to determine his guilt or innocence, but will scrutinize whether the offense he is accused of in the U.S. would be a crime in Britain.

"The most likely outcome is that he will be extracted to the United States," he said.

If Sweden also makes an extradition request, it would be up to Britain's home secretary to determine which would take priority. Typically the first request made -- in this case from U.S. officials -- would be acted on first, but officials have some leeway.

Elisabeth Massi Fritz, the attorney for Assange's accuser in Sweden, said in a statement that she hopes Britain would send the WikiLeaks founder to the Scandinavian country first, if prosecutors there file charges. Her client's case is more pressing than U.S. demands, she said, because the statute of limitations for the rape allegation expires in August 2020.

"I'm fighting for her rights to be remembered," Fritz said. "Getting justice and restitution is of utmost importance for her to be able to move on with her life."

Separately, Vice President Mike Pence asserted in an interview broadcast Friday that President Donald Trump's enthusiastic reaction to WikiLeaks' releases of damaging material on Clinton during the 2016 presidential race did not amount to an endorsement of the organization.

"I think the president always, as you and the media do, always welcomes information," Pence said in an interview with CNN. "But that was in no way an endorsement of an organization that we now understand was involved in disseminating classified information by the United States of America."

During the closing stretch of the 2016 campaign, Trump repeatedly extolled WikiLeaks at his rallies for sharing hacked emails from Clinton's campaign chairman, John Podesta.

Trump sought Thursday to disavow his past enthusiasm about WikiLeaks, telling reporters in the Oval Office: "I know nothing about WikiLeaks. It's not my thing."

In the CNN interview broadcast Friday, Pence said the Justice Department is seeking "to bring Julian Assange to justice." The Australian WikiLeaks founder was "involved in one of the greatest compromises of classified information in American history," Pence said.

The decision to seek the extradition of Assange marked a new approach to the WikiLeaks founder by the U.S. government.

President Barack Obama's Justice Department had extensive internal debates about whether to charge Assange amid concerns the case might not hold up in court and would be viewed as an attack on journalism by an administration already taking heat for leak prosecutions.

But senior Trump administration officials seemed to make it clear early on that they held a different view, dialing up the rhetoric on the anti-secrecy organization shortly after it made damaging disclosures about the CIA's cyberespionage tools.

"Assange and his ilk," Pompeo said, seek "personal self-aggrandizement through the destruction of Western values."

A week after the CIA director's speech, then-Attorney General Jeff Sessions said the arrest of Assange was a priority, part of a broader Justice Department crackdown on leakers.

"We've already begun to step up our efforts, and whenever a case can be made, we will seek to put some people in jail," he said.

The administration won't say why they decided now to charge Assange, nor will they say whether the Obama administration had the same evidence that forms the basis of the indictment.

But a U.S. official, speaking on condition of anonymity to discuss internal and legal matters, traced the genesis of the indictment to what's known as the "Vault 7 leak" in 2017, when WikiLeaks released thousands of pages of documents revealing details about CIA tools for breaking into targeted computers, cellphones and consumer electronics.

A former CIA software engineer was charged with violating the Espionage Act by providing the information to WikiLeaks and is to go on trial later this year in New York. And the leak was a tipping point in deciding to pursue Assange, the official said.

"Vault 7 was the nail in the coffin, so to speak," the official said.

It ended years of ambivalence about what to do about Assange, who was hailed by many when WikiLeaks published hundreds of thousands of State Department cables and U.S. military documents, including many that revealed previously unknown facts about the wars in Iraq and Afghanistan and the detainees held at the U.S. base at Guantanamo Bay, Cuba.

Even today, Assange and WikiLeaks have supporters around the world, as debate swirls over whether the dissemination of raw, unfiltered documents and data counts as journalism.

Daniel Ellsberg, the former military analyst behind the famed leak of the secret history of the Vietnam War known as the Pentagon Papers, called the charging of Assange an "ominous" effort to criminalize a necessary component of journalism.

"The charges are based on facts that were known throughout the Obama administration, which chose not to indict because of the obvious challenge to the First Amendment that would involve," Ellsberg said.

A former Justice Department official, who spoke on condition of anonymity to discuss internal discussions, said there was an extensive debate within the government over the feasibility of charging Assange with the publication of stolen, classified materials.

But prosecutors grew concerned that such a case would not hold up in court. Even though officials did not agree with Assange's self-characterization as a journalist, the former official said, there was concern that it would be hard to justify charging him with actions that more conventional journalists take.

The former official said the department at the time was more amenable to bringing a case like the one ultimately brought -- a narrower prosecution centered on a hacking conspiracy. It focuses on an entirely different violation that may obviate any First Amendment or press freedom concern.

"This is just charging a journalist with conspiracy to hack into computer systems, which is no different than breaking into a building or breaking into a classified safe," said Mary McCord, a senior Justice Department national security official in the Obama administration. "And that's not First Amendment protected activity."

That is a widely held view in government, even among people generally sympathetic to the mission of the media.

"This was deliberate and malicious effort to cause harm to us, to U.S. national security interests and I think it would be good if there is some accountability at last," said David Pearce, who was U.S. ambassador to Algeria in 2010 when WikiLeaks released hundreds of thousands of secret diplomatic cables. "So far there hasn't been any accountability for Mr. Assange."

Information for this article was contributed by Gregory Katz, Eric Tucker, Ben Fox, Susannah George, Matthew Lee and Ned Barker of The Associated Press; by Isaac Stanley-Becker, William Booth, Ellen Nakashima and John Wagner of The Washington Post; and by Thomas Beardsworth and William Mathis of Bloomberg News.