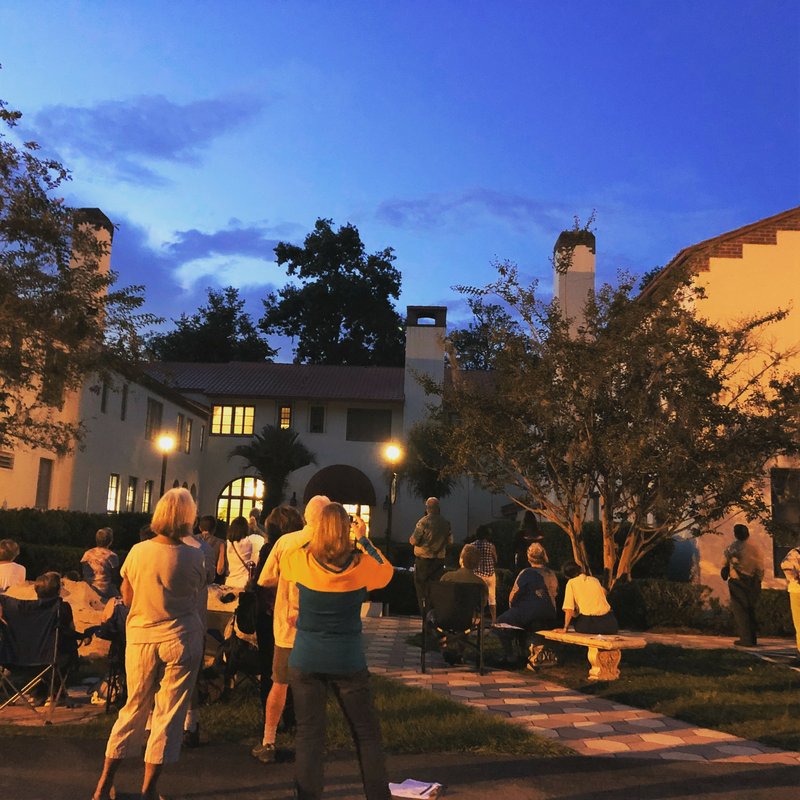 People gather on the lawn at the Lodge at Wakulla Springs for last year’s Swift Night Out. Thousands of the birds swarm the Florida state park from April-October. Photo by Nancy Moreland via Chicago Tribune (TNS)

In the gathering dusk of late summer, a crowd stares expectantly at the skies above Wakulla Springs State Park.

Just 16 miles from downtown Tallahassee, Fla., the 6,000-acre wilderness sanctuary is home to the Wakulla River and the world's largest, deepest freshwater spring. The place so impressed American Indians that they called it "Wakulla," meaning, "strange and mysterious waters."

Tonight, however, the park's historic lodge and its massive chimney hold the crowd's attention. Cellphones aimed skyward, they're poised to capture a natural wonder: more than 600 chimney swifts spiraling like autumn leaves into their nighttime roost. Weather permitting, visitors can watch the birds' nightly performance early April through mid-October.

Not a soul swats a mosquito, even in this thick emerald swath of Florida forest. They may have the swifts to thank. Two chimney swifts and their young eat more than 12,000 flying insects daily.

"We rarely have issues with biting insects around the lodge or springs," says Jeffrey Hugo, park services specialist and host of Swift Night Out, one of many events across the country aimed at raising awareness of the threatened neotropical avian. This year's Swift Night Out at Wakulla Springs is set for Sept. 14.

When the last bird enters the chimney, the watchers tally their counts, which Hugo records on the Chimney Swift Conservation Association website.

After wintering in South America, Wakulla's swifts return each spring and stay until fall. Historically, swifts nested in dead trees. As old-growth forests disappeared, they moved to masonry chimneys; when masonry gave way to metal, their numbers sharply declined. Except in places such as Wakulla, part of the Great Florida Birding and Wildlife Trail.

"The trail is a network of more than 500 sites that preserve wild places, so people can experience moments that get them hooked on nature," says trail coordinator Liz Schold.

That night in Wakulla, few people spoke or moved as the spectacle unfolded. Did they wonder: How do these swifts, who fly more than 3,000 miles, find a dark rectangle of chimney deep in the woods?

As twilight yielded to stars, the birds' soft chittering subsided. The watchers drifted off, but not without the memory of dark clouds of swifts whirling through a timeless ritual in the skies.

Old Florida isn't fabricated at the Lodge at Wakulla Springs; it never disappeared. Built by financier Edward Ball in 1937, the Mediterranean revival retreat recalls a time when sipping cherry phosphates at the "world's longest" marble soda fountain bar was something to write home about. An art deco elevator transports guests to rooms outfitted with period furnishings. Several overlook the springs, where part of Creature From the Black Lagoon was filmed by Universal in 3-D in 1954. When not cooling off in 70-degree spring water, visitors can enjoy boat tours, nature trails and sampling local specialties in the Edward Ball dining room. Rates from $119 to $269 a night.