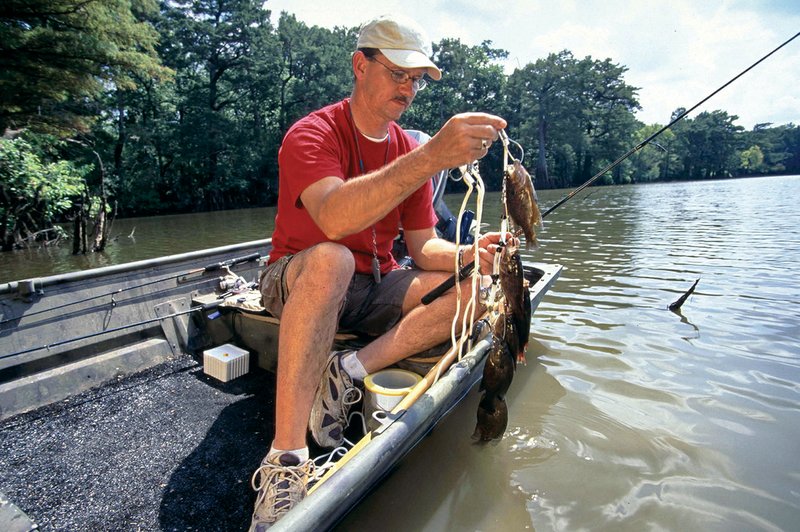 Small sunfish are abundant and prolific, so anglers shouldn’t shy away from keeping a mess of them for the dinner table. Here, Lewis Peeler of Vanndale is stringing up warmouths for a home fish fry.

You never know what you’ll hook when you’re fishing in a swamp, but chances are, whatever you reel in will have an oddball name. I thought about this last spring while panfishing in a river-bottom lake near St. Charles.

Dabbling a cricket in a hollow cypress tree produced a fat warmouth, a fish also known by the peculiar names “jugmouth” and “goggle-eye.” The flier, or “shining bass,” is rare there, but my crickets proved irresistible to one hiding in a willow thicket in shallow water. That day I also caught several “stumpknockers,” small, brightly colored panfish more properly known as spotted sunfish.

Despite their unusual names, these swamp-loving members of the sunfish family are fun to catch on ultralight tackle. They don’t rate a mention in most panfish-popularity polls, but they’re delectable table fish and inhabit many lowland waters in Arkansas. Panfish anglers who savor the spice of variety often include one or more of these scrappy little fighters on their menu of targeted species.

The warmouth (Chaenobryttus gulosus) loves swamps and other densely timbered waters. The origin of its unusual name is uncertain, but some think it came from stripes resembling war paint across the cheeks behind its big maw. Some Arkansans call the fish by an old moniker—warmouth bass. Other nicknames include goggle-eye, molly, redeye, mud bass, weed bass, strawberry perch and bigmouth perch.

It’s not hard to catch warmouths if you’re fishing a swamp with hollow cypress trees and stumps. These fish like to hide inside the dimly lit cavities within these structures, and if the hole is big enough to drop a jig, cricket or worm into, you’ll soon be catching warmouths one after another.

Another place you’ll find them is the submerged edges of beaver lodges. To catch the warmouths, you’ll need to use a jigging pole or cane pole to lower a small jig down into small openings between the branches that form the lodge. Even silver-dollar-sized holes can harbor these fish, and though you’ll lose a few jigs, fishing little openings is one of the best ways to load a stringer with fat little goggle-eyes.

Mini-crankbaits are also good warmouth catchers. Use 1/12- to 1/8-ounce lures resembling minnows or crayfish, and cast them out with an ultralight spinning or spincast combo using 2- to 4-pound-test line. Cast around cypress knees, stumps, weed beds or other attractive cover, and get ready for an exciting battle with one of these spunky, big-mouthed fish.

Although the spotted sunfish (Lepomis punctatus) is unfamiliar to many anglers, this little beauty lives in swampy waters throughout Arkansas and the Southeast. This fish rarely exceeds half a pound, but its consistent scrappiness, pretty colors, chunky physique and sweet-tasting meat make it a favorite with a small cadre of devoted panfishermen in Florida and elsewhere. Few anglers fish purposely for it, but as an incidental in a mixed bag, there’s no reason to keep the spotted sunfish off the stringer.

On some oxbow lakes in Arkansas, I have watched spotted sunfish flip from the water and smack against stumps and cypress knees to dislodge dragonfly nymphs and other insects. This habit has earned them the curious and often-used nickname “stumpknocker.” Other handles include spotted bream, scarlet sunfish, red perch and chinquapin.

I’ve caught spotted sunfish on worms, crickets, small spinners and popping bugs, usually in calm or moderately flowing water near some type of woody or rocky cover. They often hide around cypress knees and stumps in oxbows, where they forage on insects, small crayfish and other frequently taken foods.

Unfortunately, it’s a rare occasion when you’ll take more than two or three individuals from a single patch of cover. That’s one of the reasons this sunfish is so little known. But despite its relative obscurity and small size, the pugnacious spotted sunfish is a real treat for any fun-seeking angler.

The flier (Centrarchus macropterus) is another member of the sunfish family sometimes encountered by bottomland anglers. The flier’s range is expansive, taking in swamps, bayous, oxbow lakes, creeks and swampy backwaters of large rivers throughout much of the Southeastern U.S. The fish is common nowhere, however, and few waters harbor enough sizable fliers to provide quality fishing. Catching half a dozen a day, even in prime waters, is quite a challenge. The average size of this sunfish is only a few ounces, and though it’s an excellent table fish, few anglers consider it worthy of their attention.

Showy, oversize fins impart a subtle, rounded beauty to these little swamp fish. The sides exhibit an intriguing pattern created by dark spots punctuating each silvery scale. Each eye is slashed by a dusky vertical bar. The soft dorsal fin on juvenile fish bears a distinctive black ocellus or “eye spot” ringed with vivid red-orange. Fliers resemble their close relatives, the black and white crappie, but differ from them in having 10 to 13 dorsal fin spines (versus 6 to 8).

In Fishes of the Central United States, Joe Tomelleri and Mark Eberle note the origin of the fish’s name: “In its enthusiasm for floating insects, this sunfish sometimes bursts acrobatically through the surface of the water, a habit having earned it and its winglike fins the title of flier or flying perch.” Colloquial names include round flier, round sunfish, shining bass and long-fin sunfish.

Fliers are slow growers — 6- to 7-inch fish are usually 4 or 5 years old. Those less than 7 inches feed primarily on small crustaceans, but larger fish are insect-eaters.

First-rate baits for large specimens (occasionally a pound or more) include live crickets, dragonfly and damselfly nymphs, and small grasshoppers. Bluegill tactics catch them, but fliers are more inclined to rise to the surface for their food. You’ll do better by rigging with no sinker or bobber, allowing the hooked bait to float on the surface and wiggle enticingly. Fly fishers catch them with popping bugs, flies and nymphs.

Fliers, spotted sunfish and warmouths don’t get very big, but size isn’t everything. If you’ve ever spent a long day on the water fishing unsuccessfully for some highly touted game fish, you can appreciate how a few quick skirmishes with these bantam brawlers can lift your sagging spirits.

If you’re looking for a way to relax, to get away from it all, to capture the fun and excitement of no-frills fishing, head for a swamp and rediscover the joys of “catch-what-bites” panfishing.