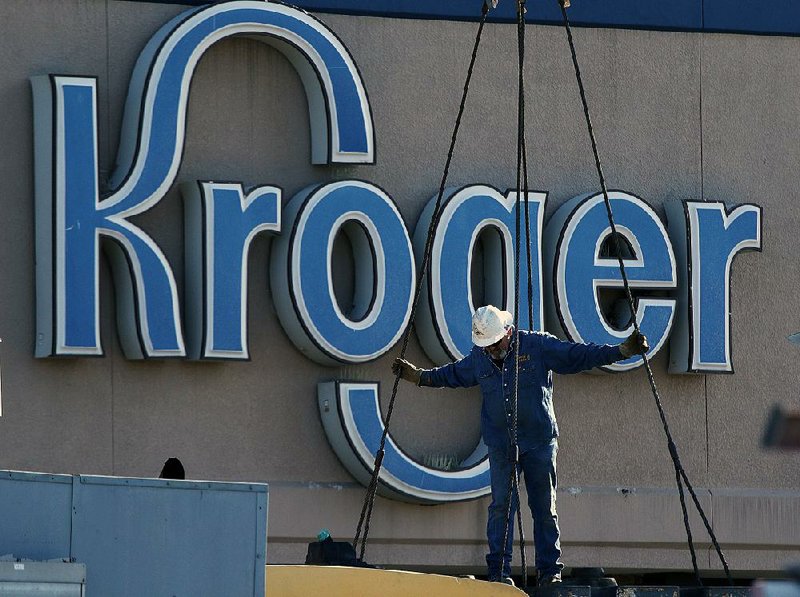 Workers hook up cables while replacing the air conditioners at a Kroger store in North Little Rock in 2017.

In the battle for grocery domination in the digital era, retailers across the state are evolving to remain competitive.

Kroger Co., the largest U.S. supermarket chain, is remodeling its stores, investing in driverless delivery vehicles, competing for the lowest product prices and eliminating single-use plastic bags, among other plans.

The grocer has been taking short-term losses for long-term gains, investing in robots and automated warehouse spaces, and "the tide should begin to turn," said Ben Bienvenue, a food analyst at Stephens Inc.

Shares of Kroger fell 10 percent to $25.61 the day after its fourth-quarter earnings report in March missed analyst expectations. In the report, Kroger executives described the company's fiscal 2018 as an "investment year that laid the groundwork" for future growth. Billions of dollars were spent that year on stock repurchases. Hundreds of millions were spent on employee pension plans and recent partnerships with British online supermarket Ocado and meal-kit delivery group Home Chef.

The Cincinnati grocer also continued to invest in its 2017 plans to offer a more digital, personal shopping experience to all its stores, while cutting down on food waste. Similar initiatives at Harp's, Walmart and other retailers have led to the sale of discounted baked goods or reusable shopping bags.

Consumers may notice changes at Target and Walmart stores, "but that doesn't mean that Kroger is falling behind," said Jennifer Bartashus, a food and retail analyst with Bloomberg Intelligence.

A lot of Kroger's strategy is geared toward revamping its stores and making its private-label products more appealing, she said, with improvements in package design and advertising efforts behind the Simple Truth brand and its organic options.

"I've seen national advertising for that in New Jersey," Bartashus said about Kroger's brand. "And there's not [a Kroger store] for hundreds of miles."

Kroger's stores in central and northeast Arkansas are being renovated as part of the company's Restock Kroger initiative. Plans include reconfigured aisle space to support in-house brand sales growth. There are also plans to encourage shoppers to use Kroger's order-ahead digital technologies such as curbside and in-store pickup.

"E-commerce. Nobody can hide from it anymore," said Charlie Spakes, president of the Arkansas Grocers and Retail Merchants Association.

As national retailers continue to invest in technology, he said smaller, independent grocers have realized "store-side pickup is ... the way of the future for a lot of their customers" and reacted to that with their own smartphone apps and programs that offer grocery pickup and delivery.

This time last year, Kroger cut prices on more than 3,000 food items at its Arkansas stores, including staples like milk, bread and bananas.

Teresa Dickerson, Kroger's Arkansas spokesman, said in an email that shoppers can expect to see upgrades this year at Kroger stores in Conway and Maumelle "with a few more hopefully being added to the list soon."

Remodels can be an arduous process for U.S. stores and shoppers. When they occur, Kroger often "resets" the stores -- "which can cause a bit of confusion with our customers," she said.

A trend among Kroger and other retailers is a shift to move house-name brands toward the top and bottom shelves, and place private-label products at eye-level with the customer, Bartashus said.

"It puts it more in the line of sight, which draws attention," she said.

Unlike other retailers, Kroger began selling its own line of food products shortly after it was established in 1886. House brands provide fatter profit margins and have lower retail prices. Consumer shopping trends for household products are evolving and the larger grocers are taking a cue from companies like Trader Joe's, a grocer that stocks mostly private-label products.

People have extra money and want to put their dollars toward affordable organic products, Bartashus said. In response, retailers are "spiffing up their packaging, hoping it will help to drive up sales," she said.

Walmart has the largest grocery store presence in the state, with 131 retail locations, including Sam's Clubs. Harp's has 58 stores in the state and Kroger 36. There are a few Edward's Food Giant stores and Brookshire's stores in central and south Arkansas. Amazon's Whole Foods chain has a store in Little Rock and one in Fayetteville.