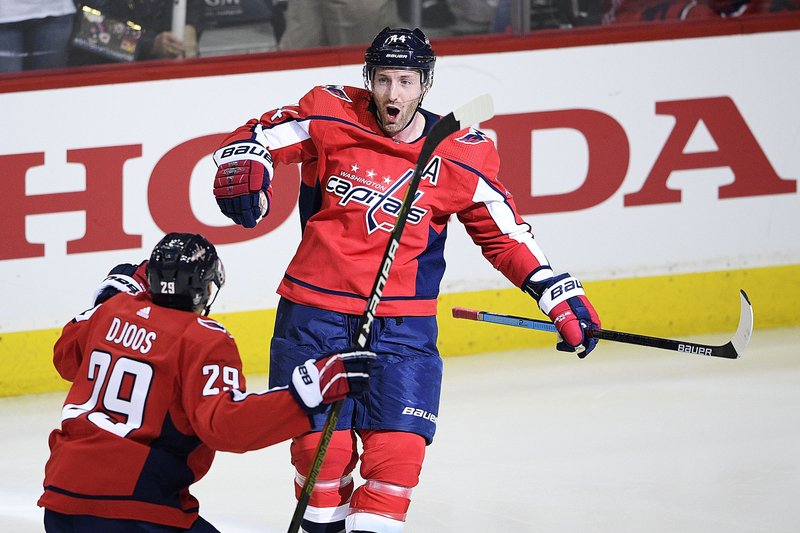 Washington Capitals defenseman Brooks Orpik celebrates his game-winning overtime goal with defenseman Christian Djoos during Game 2 of a first-round playoff series against the Carolina Hurricanes on Saturday in Washington. The Capitals won 4-3 to take a 2-0 series lead.

WASHINGTON -- A rat falling out of the arena hallway ceiling during the Carolina Hurricanes' warmup game of soccer was just a precursor to a wacky afternoon of playoff hockey.

Long after the dead rodent was removed, Game 2 between the Hurricanes and Washington Capitals included a questionable ejection for a check to the head, a shot off one goalie's mask and another that went in off the other goalie's backside. It fittingly ended with an overtime goal from an unlikely source that sent the defending Stanley Cup champions into a wild celebration around the team's most popular player.

Veteran leader Brooks Orpik scored 1:48 into overtime Saturday to give Washington a 4-3 victory and a 2-0 lead over Carolina in the first-round series. His fourth goal in his 151st playoff game was his third winner, and Orpik became just the 11th defenseman in NHL history with two postseason overtime goals.

"I'm probably not counted on for too many goals, but I think if you want to have the long runs, you need everybody kind of chipping in and doing things they don't normally do," Orpik said. "Always feels good when the team comes out on top."

The Capitals came out on top thanks to Alex Ovechkin's two perfect passes, a 5-on-3 penalty kill and a stick shortage by Carolina that allowed Evgeny Kuznetsov to find Orpik for his goal. Afterward, owner Ted Leonsis quipped, "Just like it was drawn up."

Just like Game 1, the Capitals jumped out to an early 2-0 lead -- this time on goals by Nicklas Backstrom and T.J. Oshie -- but this time the Hurricanes didn't wait until the third period to come back.

Lucas Wallmark scored late in the first after teammate Saku Maenalanen brushed Braden Holtby, which Capitals Coach Todd Reirden challenged for goaltender interference. It held up because the NHL situation room and referees determined the contact wasn't significant enough to disallow the goal.

"Playing the position, you know that that's interference," said Holtby, who made 25 saves. "But there's a point in hockey where you've just got to battle, too. I'm not going to complain about a call or no-call. I know that doing that is giving me the best chance to stop that puck. We move on."

Things only got stranger in the second period. Less than a minute after exiting the penalty box, Hurricanes forward Micheal Ferland hit Nic Dowd while bent over and was given a five-minute match penalty for an illegal check to the head and ejected.

During the ensuing power play, a one-timer from defenseman John Carlson hit Hurricanes goaltender Petr Mrazek on the right side of his mask and knocked it off. Mrazek winced in pain but did not get pulled for concussion protocol and stayed in the game.

"It caught me a little bit on the chin there," said Mrazek, who made 29 saves. "When I fell, I didn't have the mask on and I hit the ice pretty hard with my face. That was the worst."

The worst moment for Holtby came when Aho ended a 15-game goal drought by banking the puck off him from a bad angle. Wilson and Jordan Staal traded third-period goals, and Mrazek stopped Carlson in the final seconds of regulation.

That only set the stage for Orpik's heroics. After Hurricanes defenseman Brett Pesce lost his stick and got one from forward Teuvo Teravainen, the Capitals had the opening they needed to take a 2-0 series lead and players mobbed Orpik to celebrate the father figure's clutch goal.

"There's really no better guy to score an OT winner," Wilson said. "We were pumped up, and he deserves it. Huge goal for us."

NASHVILLE, Tenn. -- Craig Smith scored five minutes into overtime to give Nashville a victory over Dallas, tying the first-round Western Conference series at 1-1.

Smith scored his first this postseason from the inside edge of the left circle to snap a three-game playoff skid on home ice for Nashville.

Rocco Grimaldi also scored for Nashville, and Pekka Rinne made 22 saves. The Predators had lost five of their last six postseason games in the place they call Smashville.

Jamie Benn scored for Dallas. The Stars were outshot 43-23.

Game 3 is Monday night in Dallas.

BOSTON -- Brad Marchand and Patrice Bergeron scored and Tuukka Rask stopped 30 shots to lead Boston to a victory over Toronto, tying the first-round playoff series at one game apiece.

Two nights after Toronto beat Boston 4-1 in the opener to steal away home-ice advantage, the Bruins dominated their Atlantic Division rivals, taking a 3-0 lead with a 29-16 edge in shots on goal into the third period. Charlie Coyle and Danton Heinen also scored for the Bruins.

Nazem Kadri scored the Leafs' only goal midway through the third, and Frederik Andersen made 37 saves for Toronto, which returns home for Games 3 and 4 on Monday and Wednesday nights.

Severely outplayed in Game 1, the Bruins responded from the start, calling upon speed and toughness they failed to show in the opener.