ON BOOKS: Poet Justin Booth remains a work in progress 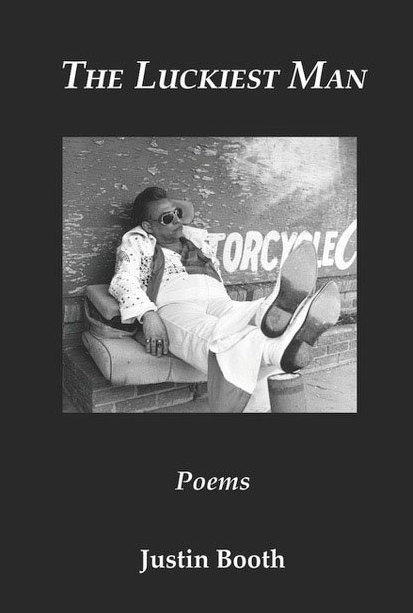 It is obvious that Justin Booth has a marketing plan; good for him.

You don't make a living as a poet in America, or probably anywhere else in the world, but you can subsist -- or more than subsist -- as a personality, a brand or, if worse comes to worst, a celebrity. And you can attain that kind of status. I'm not sure you can make yourself a poet.

Maybe you can. Larry Brown, as tough and honest a writer as I ever knew, insisted his literary success was an act of will, that he just kept typing up his stories and sending them off to the men's magazines until he more or less by trial and error discovered how to write in his rye-flavored own voice.

Still I'm suspicious, and if all Booth had was the want-to, I'd feel bad for him and maybe send him an encouraging email but I wouldn't be writing about his latest, and most assured book of poems, The Luckiest Man: Poems (Blue Horse Press, $15). Now I can only feel bad for him because he is a sure enough poet.

He writes a little like Charles Bukowski, an influence I'm sure he'd admit to, and a little like E.E. Cummings in the way he drips his words as through an IV ("I spent most of my life caught in the trap of I.V. drug addiction," he begins his brief introduction. "I lost my wife and children to it, went to prison a couple of times and tried multiple rehabs and programs. The last six years of my active addiction I lived on sidewalks and porches near the Salvation Army"). But there's a little of Miller Williams plainsong in there too, with just a bit of Jim Carroll jitter. Definitely post-Beat, definitely anti-academic elliptical school, you can probably rule out any of these poems ever appearing in The New Yorker.

Which might be mildly ironic given that most of these poems were either written in or about New York City, where Booth travels with some frequency to read, and (presumably) Booth's snapshots of the city are featured prominently, mixed in amid the 30 poems with 13 running off as a coda. It works, largely because while Booth is naked in his aspiration -- he would like to be the famous outlaw poet with the nine-figure book deal -- he's unpretentious in his methods, and his presentation of himself as a kind of ruined Elvis figure is charming and cannily self-aware.

Here's how he begins his poem "Truth":

of Buzz and Neil,

likely never happen at all.

Later Booth imagines hanging out with Townes Van Zandt and Blaze Foley in Austin "in a rent/house furnished in/brown plaid and/rough lumber." That's a terrific, evocative image, even if the company makes you fret a little for Booth. Neither Townes nor Blaze was much of a role model -- Van Zandt was a soaring talent whose capacity for self-harm was legendary. Foley was by far the lesser artist; a good songwriter who died before he could become anything more. (Ethan Hawke's recent film Blaze, which starred Arkansas native Ben Dickey as Foley, does an excellent job of putting the story in context; Van Zandt proffers the myth that to be authentic, an artist "has to blow everything off," sacrificing himself for his art, and Foley is the acolyte who disastrously buys into the myth.

teach me to die.

This might be the moment in the book when Booth comes closest to hard-case posturing, and those ignorant of the poet's personal story (he's working on himself, getting clean, paying taxes) might see this as just another tiresome entry in the "leave a good-lookin' corpse" essay contest. But mostly Booth is more nuanced, though understandably in the thrall of the big city. "Walking Through Harlem" is a restrained and tidily detailed account of a typical walkabout and there's a gut punch to "Her Daddy Forever" that pops like an aneurysm in the final line.

Booth is good at final lines, which led me once to ask if he thought of them first and worked backward. He said he didn't but I wouldn't blame him if he fibbed a little about that, one's process being one's process and seeing how Vermeer probably painted using a camera obscura. What matters is that it connects if it does, and these do more often than not, or at least with the frequency of some leaden gloved heavyweight.

After all, it only takes one good shot to knock you out.

Booth probably understands he's still more of a character than anything else, but like Larry Brown he's growing up, and he's not afraid of doing it in public. A few of these poems will probably be among the ones some academic that Booth would despise might collect someday, but I imagine and hope there's better work to come. A few of these could use another pass or two, a couple of these darlings maybe could have stood a murdering.

And someone should have caught the typo -- if that's what it is -- that turns the White Water Tavern into the "Whiter Tavern." Otherwise this is poetry. Which means no one cares -- except those whose lives it saves.

Print Headline: This poet remains a work in progress