PINE BLUFF -- A statue at the entrance to the Jefferson County Courthouse commemorating Confederate Civil War casualties will be removed if the county judge gets his way.

County Judge Gerald Robinson said he is considering removing the statue because he believes it is an inappropriate symbol.

"I think in today's time we're trying to move on, especially when dealing with racial harmony," Robinson said. "I don't think the Confederate statue depicts our country."

Robinson does not dispute the historical significance of the monument, but he said the history reflected by it refers to a time in American history when slavery tore apart the nation and mired it in a civil war that has cast a shadow ever since.

"That's not what this country is about," Robinson said. "We need to move on from it."

It is unclear whether Robinson can order the statue removed on his own authority, or if he will need approval from the Jefferson County Quorum Court. Robinson said he has asked an attorney to research what authority is required to remove the statue.

Confederate symbolism has come under scrutiny across the nation in the wake of the 2015 massacre of nine black churchgoers at Emanuel African Methodist Episcopal Church in Charleston, S.C. Dylann Roof, a white supremacist, was convicted and sentenced to death in connection with the killings. He is on death row at the federal penitentiary in Terre Haute, Ind.

That mass shooting sparked a nationwide movement to remove Confederate monuments, flags and other symbols from public spaces and to rename schools, parks, roads and other public works that pay homage to the Confederacy.

Some 114 Confederate symbols have been removed across the country since the Charleston massacre, according to the Southern Poverty Law Center report "Whose Heritage?" More than 1,700 such symbols, including the one at the Jefferson County Courthouse, remain, the report said.

Seth Levi, who helped oversee compilation of the report, said the organization's position is that Confederate symbolism presents a distorted view of history and should not be presented in publicly owned spaces.

"These monuments went up in the decades after the Civil War as part of a propaganda campaign to try and whitewash exactly what the Confederacy was about and why the war was fought, what is known as the 'Lost Cause' narrative," Levi said. "Our feeling is that these monuments are symbols of white supremacy and that they should not be on public grounds."

The 20-foot statue at the Jefferson County Courthouse, which depicts a Confederate infantryman at the top, was erected in 1910 by the David Owen Dodd Chapter of the United Daughters of the Confederacy, according to an inscription engraved onto the base of the statue.

The inscription at the base of the monument reads: "To the memory of our confederate soldiers/we care not whence they came/dear in their lifeless clay whether known or unknown to fame/their cause and country still the same/they died and wore the gray."

The statue was originally placed on the grounds of Pine Bluff High School on July 22, 1910, according to the Encyclopedia of Arkansas History and Culture. In 1974, the monument was moved to the north side of the Jefferson County Courthouse. It was listed on the National Register of Historic Places in 1996.

Numerous messages requesting comment left with the national headquarters of the United Daughters of the Confederacy in Richmond, Va., were not returned.

Loy Mauch, a former legislator from Hot Springs and commander of the James M. Keller Camp 648 of the Sons of Confederate Veterans, said the Jefferson County statue is a memorial to Confederate war dead and, as such, should be left in place.

"A lot of soldiers were killed out in the field, they were buried in the field in mass graves, in ditches, just wherever they could put them," Mauch said. "For the families who never knew where their loved ones were buried, these are like cemetery markers."

Jefferson County justices of the peace contacted by the Arkansas Democrat-Gazette were unsure whether the authority to take down the statues rested solely with the county judge or would require approval of the Quorum Court.

Justice of the Peace Ted Harden called it "a gray area." He noted that the county judge is in charge of buildings and grounds, but he would prefer the issue be left alone.

"I really don't see a need to do that," Harden said. "It will just bring attention to it, and nobody really gives it any thought.

"I think the county judge is doing a great job. He's really looking out for the county with everything he does. I just don't think this is an issue that he needs to be taking on."

Justice of the Peace Alfred Carroll Sr. said he would have no objection to taking down the statue, but he would like it preserved as a historical artifact in another location.

"I think we have items in the county museum that clearly depict our past here in the South, and I think the statue would be the same as if we have a photograph, or if we brought in another cotton gin, or brought in shackles," Carroll said. "Certainly, it is a reminder of our past and should be preserved as such."

"As mayor of a city with a rich history, I understand the significance of what the Confederate statue represents," Washington said in a released statement. "My mantra is 'One Pine Bluff stronger together.' The message that the statue represents is separation and not unification."

The Arkansas Legislature failed to pass a bill in the just-completed session that would have protected certain monuments on public property, including those that honor the Civil War.

Asked about the possibility of the bill returning in some form in the future, Robinson said he isn't worried.

"By the next session, it will be gone." 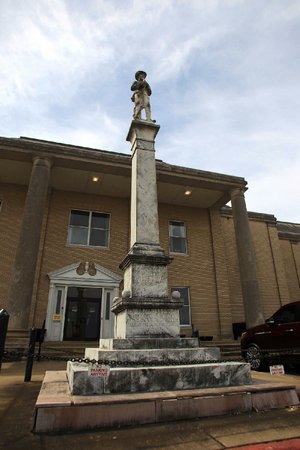