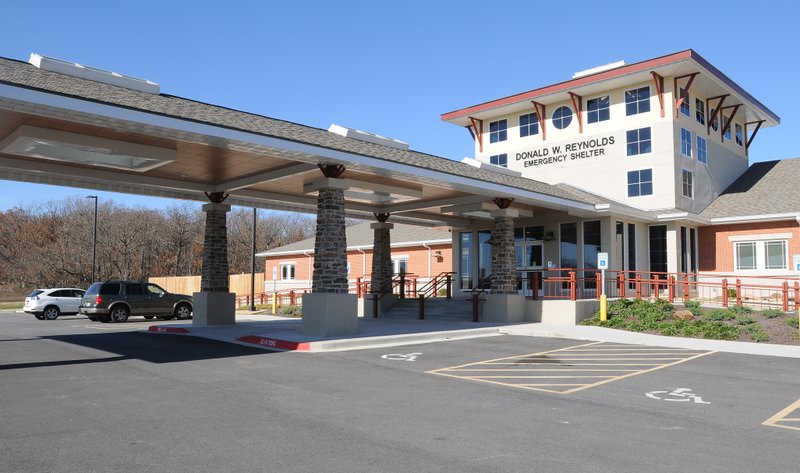 The Northwest Arkansas Children's Shelter is shown in this file photo. ( Samantha Baker)

Northwest Arkansas Children's Shelter officials want to open a charter school that would specialize in serving children who have experienced trauma.

The school would open for kids in kindergarten through third grade in August 2020 and add one grade level each subsequent year, if the state approves the shelter's application.

"This model will be the first of its kind in the state," said Jake Gibbs, the shelter's director of education. "Northwest Arkansas is a leader in so many things, so I don't see any reason why we couldn't be a leader in trauma-informed care as it relates to education and the success of our students."

The Highfill shelter is a private, nonprofit organization that provides 24-hour emergency residential care to children who are victims of family violence, neglect and abuse.

It has operated a school on-site since 1998 for children living on its campus. The proposed charter school, however, would be open to other children in the community.

The shelter can house up to 48 children but typically has only half that number at any given time. The Arkansas Department of Human Services' Division of Children and Family Services has focused on placing children directly with foster families and decreasing the use of settings such as group homes and shelters for children 12 and younger, according to Maury Peterson, the shelter's executive director.

"So we have more capacity to help, and we have this awesome facility," Peterson said.

Officials haven't decided on a name for the proposed charter school.

A trauma-informed child and family service system is one in which all parties involved recognize and respond to the effect of traumatic stress, according to the National Child Traumatic Stress Network.

Examples of trauma include abuse, neglect, abandonment, time spent in foster care and experience living in a chronically chaotic environment. Trauma has a physical effect on the developing brains of children just like a drug can have, Gibbs said.

The school will cultivate students' academic success by first identifying and meeting physical, emotional and psychological needs. Classes will be small with only 10 students per class. Each room will have a teacher and two paraprofessionals, according to shelter officials.

The school also will work to provide "wraparound" services to a student's family, such as parent training workshops, and counseling and behavior management consultations. Officials also are looking into the possibility of sending meals home with students so parents don't have to worry about making dinner, Peterson said.

Shelter officials said they intend to meet the April 25 deadline to apply to the state for permission to open an open-enrollment charter school in 2020. The state's Charter Authorizing Panel is to review those applications in August.

Charter schools, like other public schools, receive state funding of $6,781 per student and do not charge tuition. Additional funding for the shelter's charter school will come from grants and contributions from foundations, corporations and individuals, Gibbs said.

"I think it's going to be such a huge addition for education in the area," she said.

The school district has observed a growing need for mental-health services for kids who have suffered traumatic experiences, something that has led the district to set up alternative learning environment classrooms -- two at the elementary-school level and one at the middle-school level, Jones said. Those classrooms serve six to eight children at a time.

The shelter's school would accept students through a lottery system. Children who have experienced trauma and thrive in small-group instruction are likely to be a good fit for the school, according to officials.

The school would have to accept an application from anyone. It will be up to the school to ensure that it is getting the kind of students it wants to help by being clear about the school's mission, said Emily Reynolds, president of the shelter's board of directors.

"It's all going to be about education and how we let people know about the school and what our services are, so that hopefully we gear it and we are marketing it to the right people, so parents who don't need the services that we offer don't apply," Reynolds said.

The shelter's current school for its resident children will continue in separate space in the recreation building to ensure that their privacy is protected, Peterson said.

Early Mallow, who works for the Children's Advocacy Center of Benton County, said the proposed charter school is a great idea.

"I think that a lot of collaboration is going to play a key part in making it successful," Mallow said. "It is what our community needs right now, and it's what our kids need."

Judith Yanez is executive director of RootED, a Springdale-based organization that focuses on empowering parents with knowledge about all K-12 educational options for their children.

Yanez said the region needs a school like the one the shelter is proposing. She also asked what strategies the shelter will use to market the school to minority-group families, many of whom don't speak English.

Peterson said the school will be for everyone.

"So we want to make sure we're very culturally sensitive, that we understand where people are coming from and that we tap into the right resources that can help us," she said.

"And it's important to us, if we're going to meet the family where they are, that we understand that family and have the right staff on our team that they can relate to and feel embraced by."