A race to the finish: Kenyan Cherono holds off two-time former champion at Boston Marathon 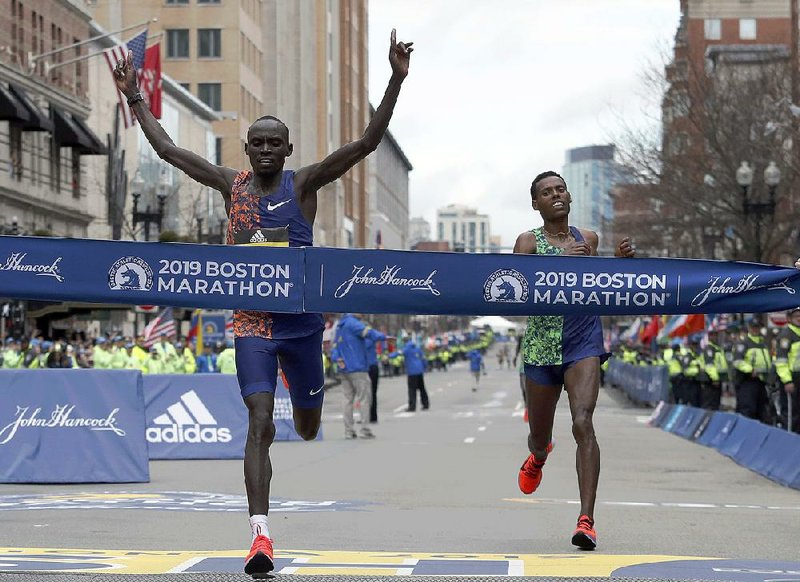 Lawrence Cherono of Kenya crosses the finish line to win the men’s race of the 123rd Boston Marathon in front of Lelisa Desisa of Ethiopia (right) on Monday in Boston. It was the first major marathon victory for Cherono, who finished in 2:07:57.

BOSTON -- Two-time Boston Marathon champion Lelisa Desisa turned onto Boylston Street with a sliver of a lead, leaning in front of two other runners with the finish line in sight.

Unfortunately for him, one of them was the fastest man in the field.

Kenyan Lawrence Cherono needed every bit of his speed to outkick Desisa in a sprint to the tape Monday, passing him just steps away from the finish line to win the 123rd Boston Marathon in 2 hours, 7 minutes, 57 seconds.

Desisa, who won in 2015 and 2013, the year the race was overshadowed by a bombing at the finish line, eased up after realizing he was beaten and finished 2 seconds back. Kenneth Kipkemoi was third, another 8 seconds behind, one of seven Kenyans in the top 10.

"It was no man's race to win," said Cherono, who had won in Seville, Prague, Honolulu and twice in Amsterdam but never in a major marathon before. "I kept on focusing. And at the end, I was the winner. I'm so grateful, so happy."

Worknesh Degefa broke away from defending champion Des Linden and the rest of the women's pack in the Framingham flats and ran alone for the last 20 miles to claim the $150,000 first prize and a gilded olive wreath from Marathon, Greece.

The 28-year-old Ethiopian, who set a national record while finishing second in Dubai less than three months ago, won in 2:23:31. Kenya's Edna Kiplagat was second, reducing a gap of more than two minutes to 42 seconds at the finish.

American Jordan Hasay was third and Linden was fifth.

"Seeing Degefa go out -- you know her ability, you know what she's done and you wonder how it translates to this course," Linden said. "But when she starts putting down those super quick miles, you say, 'All right, this is her race to lose.' She becomes the outlier and you let her just go and hope that she might come back."

Instead, she became the eighth Ethiopian woman to win the race and the third in seven years. A half marathon specialist, Degefa had never seen the Boston course before Monday.

"Last year, I watched all the marathon coverage," she said. "I kept that in my mind."

One year after an icy rain and a near-gale headwind resulted in the slowest winning times in four decades, race organizers again prepared for the foul New England weather. But overnight thunderstorms moved on before the runners left Hopkinton. The sun even made an appearance about halfway through.

Linden took advantage of last year's storm to splash her way to the first victory for an American woman since 1985.

But with conditions back to normal, so were the results: East Africans from Kenya and Ethiopia dominating the podiums. At the 30K mark the lead pack was still close to a dozen and included three of the last four champions: Desisa, 2016 winner Geoffrey Kirui and 2017 champion Lemi Berhanu Hayle.

"I was afraid of the guy who won two years ago. After he dropped out, I decided to win," said Desisa, who did not finish in either of the last two years. "I tried at the last, I saw [Cherono] suddenly, then I couldn't control the pace."

A field of 30,000 runners followed the elites, ditching their trash bags and ponchos on the Hopkinton Green before embarking on the 26.2-mile trek from Hopkinton to Copley Square. It's the first time the race has been run on April 15 since the 2013 attacks; officials held a ceremony at 2:49 p.m. Eastern to honor those killed and injured by the two pressure cooker bombs that exploded near the finish line.

Daniel Romanchuk, 20, became the youngest-ever men's wheelchair champion in Boston, finishing in 1:21:36 for the fastest time ever for an American. Manuela Schar won the women's wheelchair race for the second time, adding it to her titles in in Berlin, Chicago, New York and Tokyo.

If she wins in London in two weeks, she will have swept the World Marathon Major series.

"I was just really happy that the weather turned out to be actually really nice," said Schar, who set a course record in 2017. "When we drove to that starting line, it looked really really bad and I was worried because last year was still in our heads, and I had a really bad experience last year. Today I would say [was] unfinished business." 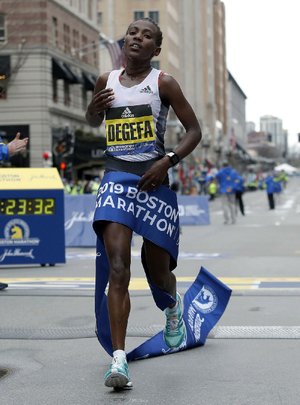 Photo by AP/WINSLOW TOWNSON
Worknesh Degefa of Ethiopia breaks the tape to win the women’s division in 2:23:31.