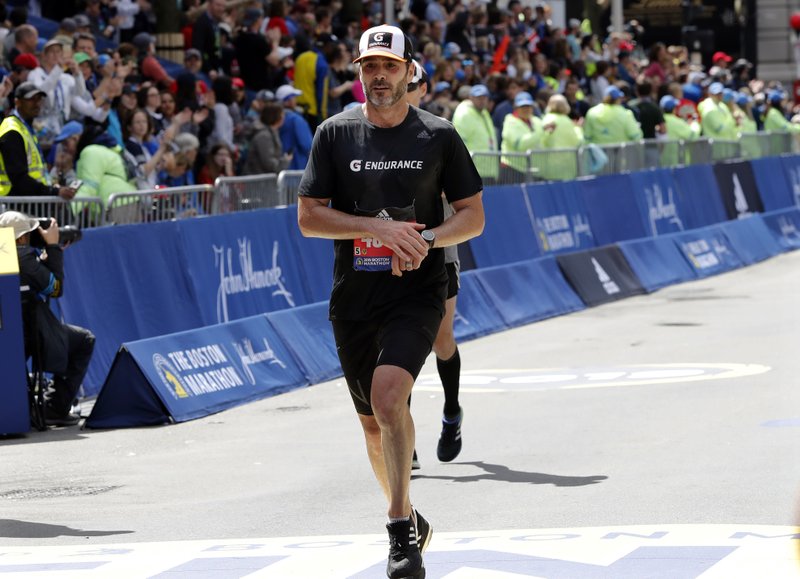 It was only after receiving his finisher's medal that Johnson ran into a road block: On his way to a postrace media availability, security wouldn't let him through.

On the course, it was a different story.

"I couldn't believe how many people did spot me," Johnson said. "Once somebody would recognize me, the crowd would get going and I could kind of egg them on and get everybody pretty loud, which is a lot of fun."

Unlike at a NASCAR race, when the fans are split among 40 different drivers, Johnson felt like the spectators lining the 26.2-mile course from Hopkinton to Boston's Copley Square were cheering for everyone. Other runners also recognized him and offered pointers.

"I had countless people come by and [be] like, 'All right, I know it's your first. We've got this coming up. Get another gel,'" he said. "It never happens at my day job. There's never advice passed out."

Wearing Bib No. 4848 as a nod to his No. 48 Chevrolet, Johnson set out with the goal of breaking 3 hours , but he realized about seven miles in: "It wasn't in the cards."

"There was a lot of race left," he said, "You think you're taking care of yourself, but the further you get you realize the energy at the start and being around everyone kind of takes a lot out of you."

Still, it's the fastest Boston Marathon ever run by a Daytona 500 winner.

Michael Waltrip ran Boston in 2000 and finished in 4:42:20. (Jamie McMurray has run two marathons, with a personal record at the Kiawah Island Marathon in 3:14:06, but never Boston.)

So Johnson is pretty happy for his debut.

Johnson received his finisher's medal from 2014 winner Meb Keflezighi, a fellow Gatorade athlete who also left a signed copy of his book waiting for the driver in his hotel room.

"I was like, 'Wow, that's really nice. I hope I have a chance to meet him,'" Johnson said. "And then he hands me my medal after the race, which is just spectacular."

Special enough to earn it a spot of honor back home. The marathon medal is going in his office, where he keeps a Daytona 500 trophy, one from the Brickyard 400 and a NASCAR championship trophy.

Johnson has had a connection to the race since 2013, when MIT police officer Sean Collier died in the pursuit of the Boston Marathon bombers. Andrew Collier, Sean's brother, was a machinist in the engine department for Johnson's team.

He wanted to run the next year, but it didn't fit in with the NASCAR schedule. This year, the Monday Patriots' Day holiday came after the Saturday night race in Richmond, Va., which happened to be a cool night. (There had been a chance of rain that could have pushed back the race to Sunday.)

"To come back and then bring up Sean's name ... I hope they're watching," Johnson said. "The family's still in the area. Hopefully they'll see it and see Sean's name and know that it's been a pleasure to bring his name back up and honor him." 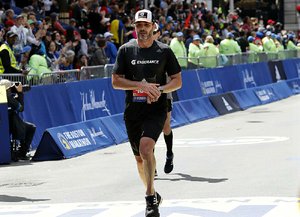